But now Weblin, a Hamburg, Germany-based startup, has figured out a way for you to teleport your Second Life avatar to any web site. The Weblin Gate being released today lets Second Life Residents (or players) export exact replicas of their avatars and use them on any web site. 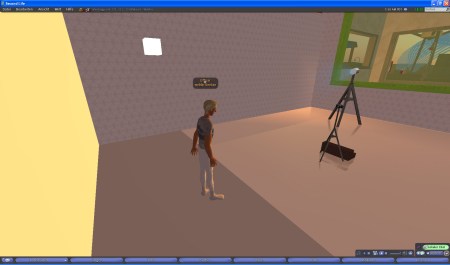 The deed is clever in a lot of ways. Second Life has more than 16.4 million registered users. Those users become attached to their avatars, but they can only use them in one world. With Weblin, the avatars are liberated. It’s kind of like a mass jail break for virtual characters.

The cool thing about Weblin is that it’s one of a number of “parallel web” applications, much like RocketOn, which launched its own virtual characters that can walk and scrawl all over other sites on the web. Both Weblin and RocketOn put a virtual layer over your web browser so that you can move your own characters around on any web site. With RocketOn or Weblin, you can chat with friends, create doors from one web site to another, and go on virtual treasure hunts across the web.

“We think of ourselves as a social browsing experience,” said Jan Andreson, chief executive of Weblin. 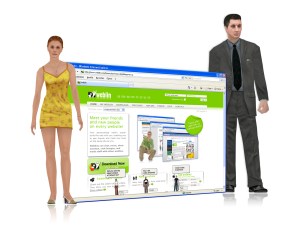 Normally, you’d create your own Weblin avatar. But now Weblin has a “photo booth” within the Weblin House space within Second Life. Users enter the photo booth with their avatars. The avatars are then captured using Weblin’s software and recreated in the Weblin universe. It’s essentially like exporting a character from one game to another. The Weblin characters are smaller than actual Second Life characters. They walk around at the bottom of a screen so they don’t obscure the user’s view of the web page. Linden Lab actively supports the teleportation application. The service is free.

[For all you Second Life players out there interested in teleporting: The Weblin house is located in a place called New Berlin, close to a tower at Alexanderplatz: New Berlin 221, 73, 32 (PG). Technically, the 3-D data is exported as a library of animated GIF files. ] The Second Life avatar is capable of performing all of the actions of a Weblin avatar, such as walking left and right, dancing, laughing or waving. 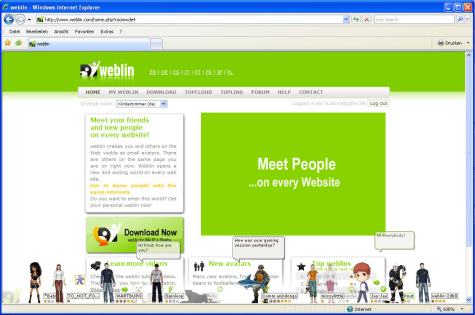 Weblin itself has more than 1 million registered users, and its social browsing application is being downloaded more than 10,000 times a day. It’s available in nine languages. The most popular hotspots where the Weblin avatars — dubbed weblins — gather are social networking sites such as Facebook, Friendster, hi5, Orkut, Yahoo and YouTube. On average, Weblin users interact with each other more than 30 hours each month.

The company has banner ad revenues now. Starting in February, it will generate virtual goods revenues via virtual gift exchanges. Weblin hopes that users will pay real money for certain services and that marketers will pay to stage Weblin promotions on real web sites. The rationale is that, while almost nobody clicks on banner ads, Weblin users are almost certain to click on ads that are built into web treasure hunts. So far, the company has premium ad revenue from Adidas and 20th Century Fox.

Weblin was founded in 2006 by Christine Stumpf and Heiner Wolf, who first used a preliminary version of Weblin in a virtual classroom application. Andreson joined as chief executive in 2007. The company has raised more than 3 million euros in three rounds from investors including T-Venture Holding, one of Germany’s big venture capital firms, Mountain Partners, and High-Tech Grunderfonds. It has 22 employees. The company is raising a new round of money now.