A company called WebWars is coming out of secrecy today with a new way to play games across a multitude of Web sites you visit — with the action all layered within your browser.

To begin with, it has created a fantasy-like game called Weblings where players collect things from the various sites they visit and battle bugs. That game will begin beta testing in July. The sites you play it across depend on what theme you choose for the game, such as science or celebrities.

WebWars isn’t the only player to put an interactive layer of gaming on top of the browser. Competitors include RocketOn and Weblin. RocketOn refers to these layered games as “parallel virtual worlds.” They’re particularly clever in that the game designer doesn’t have to create much, since the existing web really supplies the various tourist destinations within the game. Germany-based Weblin, meanwhile, lets you take a character from Second Life and use it to crawl across other web sites. 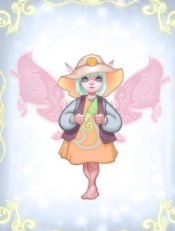 But WebWars is unique in that its treasure hunts across web sites can be directed along certain themes, like music sites. There is potential for some kind of advertising deals, since WebWars could potentially steer a lot of players to certain web sites. But the company isn’t talking about that right now. The character on the right is a “Webling” which lives on the Internet. Players have to collect these characters in the game. Once you catch a Webling, you use it to find others.

WebWars is led by Cindy Armstrong, a 20-year veteran of a variety of game and online entertainment companies. She said the platform will liberate players who want to play a game and visit their favorite web sites at the same time. The game platform has a modular structure that also makes it easy to develop Flash-based online games. Armstrong said it will be easy to generate games quickly using the reusable modular system across a variety of web games. It will also be easy to revise games on the fly.

The game has two-dimensional graphics and will be free-to-play, meaning you can start out playing for free. But if you want to buy something, such as something that customizes your character, you can do so with micro-transactions.

Mike Heisley, founder of the The Heico Companies (a construction company) and majority owner of the Memphis Grizzlies basketball team, is both chairman and an investor. Armstrong was most recently chief executive of Webzen America, the U.S. arm of a Korean game developer.