Rumble Entertainment is getting a big backer — Nexon, the online gaming giant of Asia.

Nexon has announced that it has made a strategic investment in Rumble, a maker of free-to-play games.

A couple of weeks ago, Nexon said it would invest in and publish the first game coming from SecretNewCo, a gaming studio started by former Zynga chief game designer Brian Reynolds.

Owen Mahoney, the chief financial officer at Nexon, will join Rumble’s board. Rumble is making social games for hardcore gamers on multiple platforms. Rumble was founded by chief executive Greg Richardson, the former partner at Elevation Partners private equity fund (the firm that made the BioWare/Pandemic alliance). Richardson, who gave a talk today at the Casual Connect game conference in San Francisco, said that triple-A games have been the domain of the consoles but that they are now moving to new digital game platforms.

“Now is the time for triple-A games” to move beyond traditional models, Richardson said. “The fundamental business model that has fueled the console business, with $60 blockbuster sequel games, is going the way of the dinosaur.”

He said that mobile and social games on digital platforms will be the path for expanding the market in the future.

“Right now, games on mobile and social don’t have the emotional resonance” of triple-A games, he said. “They are more like monetization engines.” 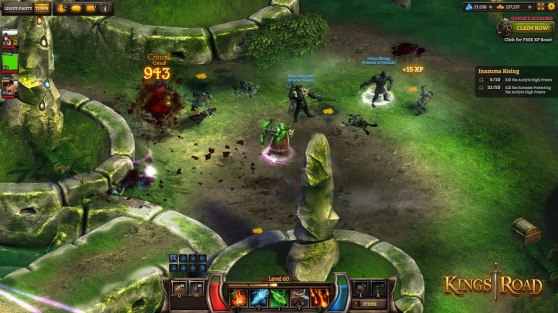 Richardson wants to change all that, and Nexon is going to help. Nexon is making a cash investment in exchange for a minority stake in the startup. Terms were not disclosed.

“The momentum at this point feels inexorable,” Richardson said.

To show what he meant, Richardson showed Balllistic, made in Unity’s game engine, and KingsRoad, made in Flash. Rumble’s aim is to make its games easy-to-play and accessible while deep and engaging at the same time. He wants to make high-quality, no-download, no-installation social games that have the same kind of immersive action as console titles.

Richardson said the company learned patience. A year ago, it tested KingsRoad in the market and found that while people played it and liked it, they didn’t come back. So the company went back to the drawing board and tweaked the game. They tuned it into a service that improves over time.

“That has really helped us tremendously,” he said. “A big part of that is getting humble and listening to your players.”

Mahoney said he knew Richardson while both were at Electronic Arts and that they stayed in touch.

“I was intrigued by what they were doing at Rumble,” Mahoney said. “The question is how do you keep users playing for a long time. How do you get people engaged in a game over time? We have learned that over the years and we want to help our partner companies figure that out.”

He noted that free-to-play games have been slower to catch on in the West, in part due to slower broadband speeds and social differences too.

“Greg’s company has been very thoughtful in understanding the differences and the opportunities,” Mahoney said.