WGT Media, a social-mobile game publisher which started life as World Golf Tour and makes realistic social sports simulations, has made a successful jump to mobile. The company told GamesBeat exclusively that its free-to-play WGT Golf Mobile title has hit 3 million downloads over the past year on iOS.

San Francisco-based WGT creates high-definition virtual sports simulations, with realistic imagery based on actual photographs that makes you feel like you’re really stuck in a sand trap at the St Andrews golf course in Scotland. WGT got its start on the Web and on Facebook, where it found a lot of golf fans who wanted to socialize with each other. They didn’t mind that the 3D graphics weren’t fast-action like realistic video games such as Electronic Arts’ packaged PGA golf games. Over time, WGT added a ton of courses and official licenses, and it retained a small, but loyal and rich, audience.

The studio expanded to baseball in 2012. And now, between WGT Golf and WGT Baseball, the company has had more than 20 million downloads. It made the shift to mobile a year ago with the launch of WGT Golf Mobile on iOS, and the Android version is available in a few countries now. The Android edition will be more widely available in the U.S. and the rest of the world in February. With the results so far, WGT Media expects that the golf game will become the most-downloaded mobile golf title in 2015.

“We enable fans to play their favorite sports games wherever they are,” said YuChiang Cheng, WGT Media founder and CEO, in an email. “As a company we take a methodical, thorough and long term strategy to do things the right way. It took us awhile to learn the mobile way, build a mobile tech platform and also hire top talent, but the investment is paying off.”

He added, “Mobile is very different than web or console and we had to adjust the golf title while building a true trans-media title. The existing web players can seamlessly login to mobile with no friction and the mobile players can play multiplayer game against WGT players on any platform. The main focus of the mobile title is quick 5 min head to head sync multiplier games.”

WGT Golf Mobile has high-definition imagery with actual course photographs, terrain mapping, and physics that try to deliver the most realistic golf simulation. On any given day, more than 100,000 WGT Golf players compete in single and multiplayer games and tournaments on championship courses like Bandon Dunes, Pebble Beach, and St Andrews.

Overall, all of the WGT Golf titles reach more than 3 million unique visitors a month, with average session times on mobile and the Web at 45 minutes. On average, WGT players are mostly males over 30 years old, and they are also real-world golfers.

WGT offers sponsors in-game and customized branding opportunities. It has also become a sponsor of the largest virtual-golf competitions in the world. For instance, it holds The Virtual U.S. Open with the United States Golf Association (USGA) and sponsor Lexus. That tournament has been growing for six consecutive years.

And WGT launched the PGA Championship Virtual Challenge with the PGA of America last year at the virtual Valhalla Golf Club. More than a million rounds of golf were played, and 25,000 fans experienced the Samsung PGA Pick the Hole Challenge. The WGT Virtual Tour is covered on the Golf Channel, and it is livestreamed on gameplay site Twitch.tv. 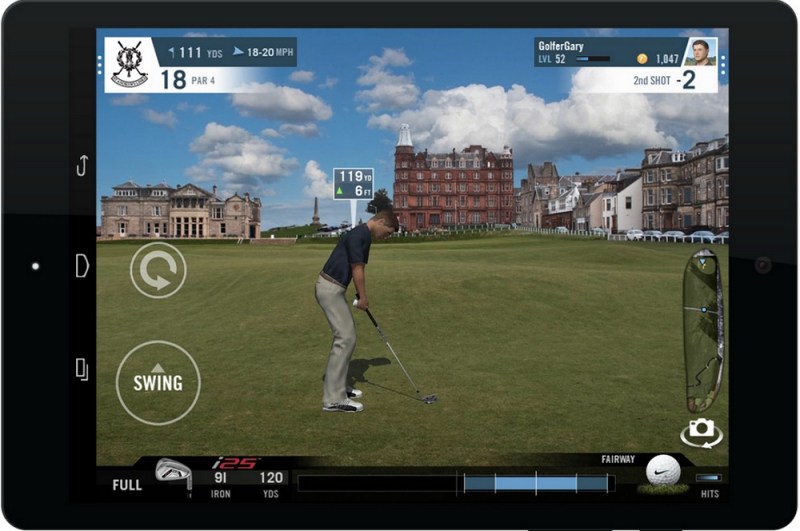 Above: Action from WGT Golf Mobile on an Android tablet.