For those who haven’t noticed yet, the market for mobile games in the West has started to mature. 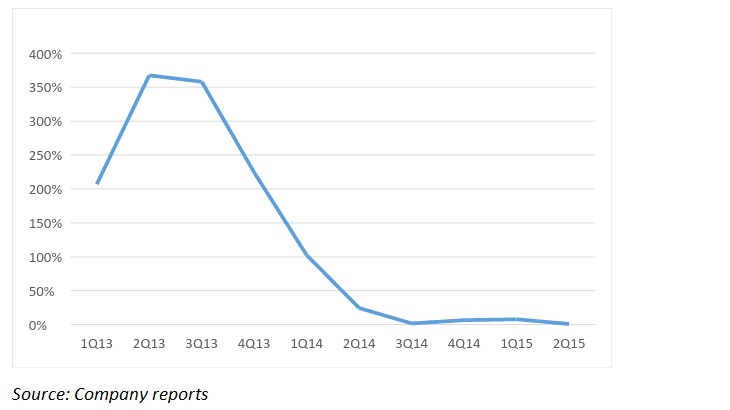 Above: Growth has slowed for six public mobile game companies.

Not only has revenue growth slowed down, but the cost of doing business has also risen substantially over the last few years. During this same period, cost of distribution has increased drastically — ad revenue/mobile daily active users (DAU, a reliable indicator of distribution cost) for Glu and Zynga was up 28 percent from a year ago and 36 percent from a year ago, respectively, during the second quarter of 2015. 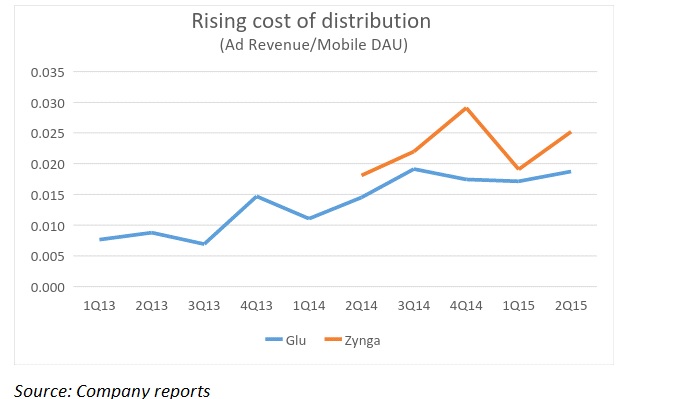 The story of slowing growth and rising costs for mobile game companies shouldn’t be a surprise, as we have seen this story play out several times in the past. Recall the gold rushes for PC, console, and Facebook games, in the ’80s, ’90s, and 2000s, respectively, that attracted hordes of developers. Subsequently, slowing growth and rising costs led to consolidation with a number of “also-ran” companies that got acquired or, worse, went belly up (e.g., Midway Games, THQ, Realtime Worlds). The result was a handful of “at-scale” companies dominating each of the platforms, such as Blizzard on PC, Activision and EA on consoles, and Zynga on Facebook.

The difference this time around is that the time to maturity was shorter for mobile games industry than that for previous platforms. Given the leverage in the model, a few of “at-scale” businesses — such as Supercell, King, and Machine Zone — have already established dominance and are vastly profitable (King’s EBTDA margin at ~40 percent, Supercell likely even higher given its small cost-base); and a number of “also-ran” businesses are still chasing to get to scale that would lead to desired profitability. While some “also-ran” businesses will eventually find their way in the “at-scale” club, most are likely to consolidate or wither away, similar to what happened during maturity phase of other platforms.

In order to join the “at-scale” club, a number of “also-ran” companies have recently shifted their strategy — away from launching a large number of titles to focusing on a fewer number of titles, doubling down on quality and production values. They’re supporting their product with a stronger go-to-market strategy. As a result, some recent games have shown improved performance, though none have succeeded at dethroning the dominant at-scale games. 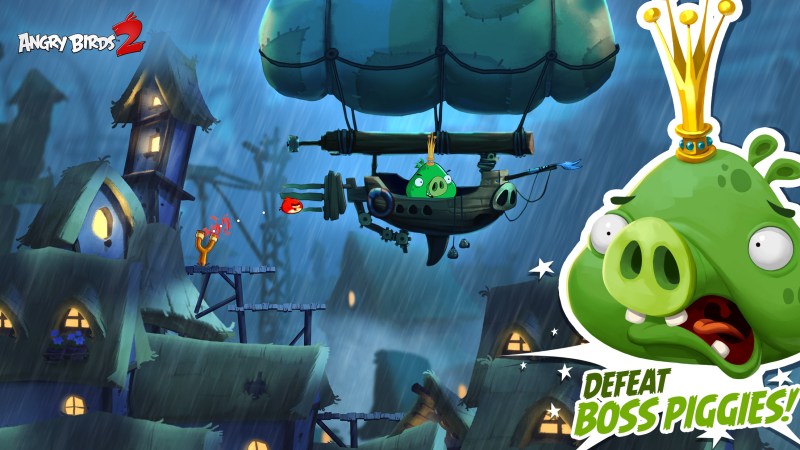 Above: Boss battles take a different kind of strategy in Angry Birds 2.

The next big “at-scale” businesses for mobile games will be built green field, rather than in markets and genres dominated by existing leaders, in my opinion. A strong “match-3” or a tower defense game could become a good lifestyle business, but is not likely become an at-scale product given dominant leadership in these genres and given incumbents’ ability to invest opportunistically in sales and marketing to thwart potential competition. The green-field opportunities could be either new genres (e.g. shooting, sports – two vastly popular genres of games that have been under-indexed on mobile) or new geographies.

Innovating a successful game mechanic for under-indexed genres could be lucrative. But it’s also tedious, time consuming and expensive. A case in point, the success of Top Eleven likely stemmed from players’ love for soccer and a game mechanic (team management) that worked well for mobile vs. many unsuccessful attempts to bring the simulation sports experience on mobile that players found too cumbersome on a small screen. Similarly, despite a number of attempts (Call of Duty, Uberstrike, Contract Killer), the shooting category has not yet taken off on mobile, likely due to want of a game mechanic that is more suitable for small touchscreens.

I believe that the lower hanging fruit are the new, unexplored territories. Since the early 2000s, we have witnessed the development of a PC game industry in China, new game platforms in Japan and Korea, and, most recently, explosive rise of mobile games in China. While Western game companies didn’t participate in this value creation (except for Blizzard and Riot Games), they may soon be able to more than recuperate the missed opportunities.

A new emerging opportunity has the potential to dwarf some of the more recent markets we have seen.

Atul Bagga was most recently the CFO  for Zynga Asia. Prior to Zynga, Atul was an equity research analyst covering digital media and Internet with Lazard Capital and ThinkEquity. He’ll be moderating a session at our GamesBeat 2015 conference on October 12 and October 13 in San Francisco Twitter: atulbagga; Linkedin: https://www.linkedin.com/in/bagga.