Multiplayer online battle arenas, or MOBAs, are confusing. Games like League of Legends and Defense of the Ancients for PC are incredibly popular, but if you’re like me, you don’t know the first thing about them.

That’s why I enrolled in the free five-day League of Legends course at LOLGuides.com. The full Summoner School promises huge performance and ranking boosts in eight weeks — for $67. “Weeks” is a bit misleading. Members complete these courses at their own pace, and while founder Paul Patton advised us that it’s not exactly for beginners (he recommended about one month of practice first), we thought it would be fun to put a total inexperienced noob (guilty!) through the training.

I tried out the game on my own for a week, per Patton’s suggestion, and then jumped in.

The week course is only a taste of what LOLGuides’ Summoner School is like, and it’s not the same experience as coaching, which the site offers for $40 an hour (cripes). But I wanted to get an idea of what kind of investment it is and whether the full education might actually be worth the money. 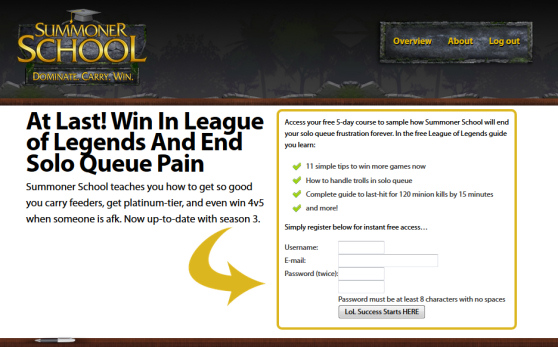 Above: The front page of LOLGuides.com.

The written tutorials contain nuggets of information that are pertinent to noobs. Summoner School helped me to understand what runes and mastery pages were and how they worked when I was otherwise clueless. Essentially, they alter a Champion’s skills and stats, and players can fill out different “pages,” or layouts, to better suit each Champion type they play. LOLGuides breaks this all down and provides templates to make this process easier. Overall, it offers tons of explanations about the roles you can assume with different Champions and how to best play them.

However, I found that the guide’s minor strategies were the most helpful to me. They were easy to understand, made sense, and equipped me with the basics so I could take baby steps forward before attempting huge leaps. Take warding, for example, or using items to reveal the fog of war on the field. I completely overlooked this feature when I started, but LOLGuides taught me not only about the importance of monitoring your environment but also why not to automatically “smart cast” my wards. Rather, a good rule is to manually place ward beacons (which illuminate small areas) according to cursor color so that they reveal the most land area possible and help you evade surprise attacks.

Other tips included shift-clicking to prevent miss-clicks, holding down Tab to track all players, and running video programs like LOL Replays to record and study your own games to identify mistakes. (I actually couldn’t get Replays to work and read that it’s prone to bugs, but Fraps, another PC-based video-capture software, should suffice.) Unfortunately, the best advice for beginners is scattered across dozens of paragraphs.

I have no doubt that LOLGuides is a rich, thorough resource for serious players, but the problem is, it leaves little foothold for noobs to grasp. Enrolling in the basic Summoner School is the equivalent of buying a college textbook, skipping every class, and trying to take a test on what you’ve shoddily gleamed from hours of reading.

It’s no substitute for actual human coaching, and much of the language is so heavy with terms, it’s hard to parse. The guide is meant for players who know what they’re doing, which raises the question: If they’re already good, why do they need the course at all? 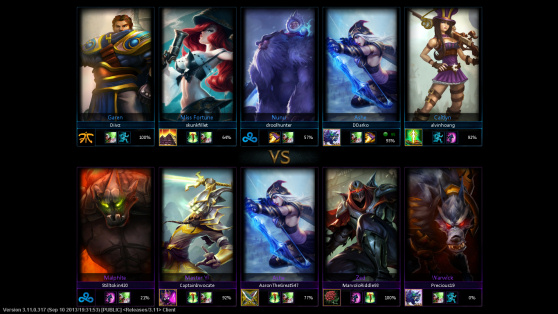 Above: Character screen from a 5-on-5 PVP game in League of Legends.

Most of the lessons went over my head, even with the practice exercises (like homework), videos, and glossary at my disposal. It took me a long time to even figure out what Dragons and Barons were as the guide failed to properly introduce them. This happens a lot.

The advice seems to boil down to studying Champions until you know their roles and skills (including their animations) by heart, which is about as easy as memorizing the attributes and moves of hundreds of Pokémon. Some people can do it, but it’s not practical for many adults.

On rare occasion, LOLGuides recommends spending cash to progress. For example, it calls paying for Riot Points and Influence Points (types of in-game currency) “the ultimate secret” to earning assets like runes, rune pages, and Champions faster, which feels like a shortcut when the hard road might net players a better learning experience.

The most accessible parts of Summoner School were those that explained concepts to readers by incorporating real-world or pop-culture examples. My favorite was when the guide compared dodging enemy skill shots through perpendicular movements to killing zombies. The undead are easy prey when they’re either stationary or running in a straight line, but when they wise up?

“An Albert Einstein zombie remains — running for his life,” reads the guide. “He’s smarter than his two comrades. He runs for safety like the second zombie. Yet in his escape he moves slightly to the left, moves to the right, and moves to the right some more before jabbing back left. You take a shot and miss. The zombie escapes to infect the world because he knew how to dodge skill shots.”

LOLGuides needs more of this approach to impart its lessons in a memorable way, rather than overloading the reader with an infinite scroll of text. 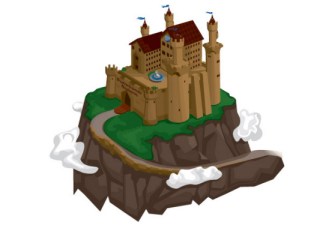 Above: Screenshot of the virtual Summoner School.

Summoner School teaches players plenty of advanced, in-depth lessons but also some important elementary ones as well: Win or lose, you’re accountable. League of Legends’ community can be nasty in game and out, but morale is higher when players help and praise each other rather than rage from across a keyboard or microphone. Like a self-help book, a portion of the free training deals with the psychology of teamwork, controlling your emotions, and dealing with troublesome players.

Simply reading the different written guides, which are incredibly comprehensive, helped me realize some key ideas about League of Legends and what it takes to become good: a hell of a lot of practice and dedication. Beginners have a lot to learn, and true mastery requires an understanding of your Champion (the character you play as), your fellow team members’ and enemies’ Champions, and the terrain, which is more than a three-lane field. Winning a war is as much about how you command your troops as using the land and natural resources available.

I’m not sure that I’m any better at League of Legends, but I do have more wisdom and appreciation for why it’s unique and the players who excel at it. The sheer amount of information that LOLGuides delivers in its week-long course — only a trial run and sampling of the bigger, $67 training — is a testament to how deep and appealing this game is.

However, as I finished writing this, I experienced my best game ever. I played as Ashe and achieved legendary status more than once, received honor points from my teammates, and scored the most kills and least deaths I ever have in one game. Maybe the conditions were just right — or maybe my exposure to Summoner School has rubbed off on me more than I thought.