When my eyes caught an email invitation to meet with Frederic Chesnais, the new CEO of Atari, my tongue had a knee-jerk reaction.

“What the hell does Atari even mean now days?!?”

The outburst comes from a place many of you may sympathize with. I have the same love for the old-school cartridge factory that some of you may share as well. Atari was the original home gaming juggernaut, and it had a creative, cutting-edge image that was infectious. Before the big crash in 1983 and Nintendo absolutely dominating the later part of the ’80s, Atari was games. This isn’t fake nostalgia coming from a GamesBeat writer born a decade too late. I’m riding into my late 30s with enough 2600 cartridges to build four miniature Warlords-inspired forts in my living room.

The thing is, the Atari legacy has been split and sold several times over. I’d need a giant whiteboard and a crate of multicolor markers to attempt a diagram that makes sense, explaining who owned what of the classic gaming brand and which studios or corporate divisions wound up renaming themselves with some version of the Atari denotation since the 1980s.

The whiteboard drawing of rainbow spaghetti would eventually point to 2013, when Atari’s French mothership, Atari S.A. (aka Infogrames S.A.), and the related North American branches — Atari Inc., Atari Interactive, and Humongous Inc. — filed for bankruptcy. This also saw the U.S. entities attempting to separate themselves from the financial burdens of the French parent company.

Emerging from this convoluted chapter in the company’s long history, Chesnais currently owns and runs all of the post-bankruptcy Atari-based operations, which at least makes it simpler to understand who we are talking about when we say “Atari.”

Aside from dealing with the watered-down identity of the Atari legacy, however, Chesnais is also dealing with an industry that is changing radically. In 2014, everyone is racing to corner virtual reality hardware, independents are finally allowed free rein of the publishing asylum, the economies of the business has changed with concepts like free-to-play, and the mobile market has matured into a cornerstone platform of the industry. Now that Chesnais has control of the brand, where is he going to steer Atari in this new landscape? 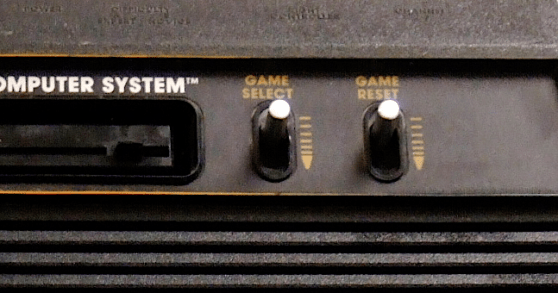 Above: Time to hit the switch?

Chesnais is aware of the gigantic whiteboard diagram that I would have to draw in order to make sense of who owned the real Atari up to this point (and the degrees of separation from the original ’80s company everyone associates the logo with). “Yeah … that is one of the challenges we face in the next five years and we need to reposition the brand … gear it more for the future.” Chesnais reflects, “You know, Hasbro got it in the ’90s. Then Infogrames bought it [at the] end of the ’90s. Infogrames renamed itself Atari, but there was kind of, uh … no ‘real’ Atari. Frankly, the best [known] Atari games were all released 30 years ago, right? So I think it is important that we reposition the brand with meaning, taking advantage of social features, online features — but this is not something that we can do in two months or three months.”

Although enthusiasts like myself, who have peeked behind the curtain of the game industry and are aware of all the purchasing and restructuring, may see a brand with wavering identity – Chesnais sees a different reaction to Atari from the masses. “It’s a positive brand, because we show it to everyone and it reminds them of something positive and the appeal of the logo … so for me it’s synonymous with … it is positive. It is fun. It is entertainment. And it is something that we like. Even if we don’t know what [Atari is]. I go through customs and immigration; they ask me … they [customs agents] say, ‘What do you do?’ ‘I do video games.’ ‘Okay. Which company?’ ‘Atari.’ ‘Ahh! Atari!'” 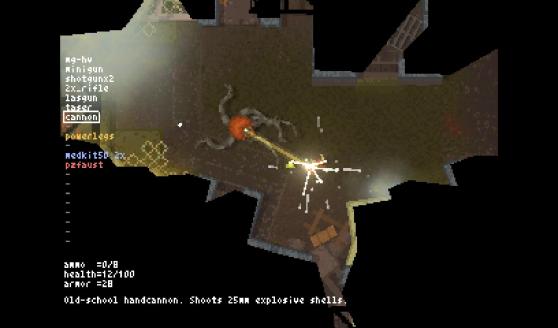 Above: Games like Teleglitch have a distinct Atari homage style

One phenomenon Chesnais could take advantage of is the wave of retro-homage that the industry has been riding for the last five years. Although we are seeing the ’80s revival fading out of pop culture, being replaced by the 16-bit sensibility of young twentysomethings who grew up in the ’90s, there are still some 2600-inspired titles floating around the video game medium’s creative consciousness. Teleglitch, for example, is what I’d imagine Doom would look like if it were designed for the limitations of an Atari 2600 console. There is also the Bit.Trip series, which is obviously inspired by the visual sensibilities of the early Atari titles.

“Look, I can’t complain, and it’s true that for us, it is one of these things where we have a brand. … We have more than 220 IPs … games … most of them are really iconic. Look, we’re even in the MOMA, the Museum Of Metropolitan Arts in New York City. There’s an expo and we’re a part of the exposition on the video game side. So, yeah! For us, you know, it can’t hurt us, right?”