Several days after purchasing an Oculus Quest, I shared my early experiences here, noting that I was on the fine edge of returning the standalone VR headset due to high hardware and software prices. After an additional week of testing, including more exploration of the launch library, I’ve reached a conclusion.

While I’m excited about Quest as a device, I’m not sure that I’d widely recommend investing in the platform quite yet. To be clear: Several types of people will have great experiences with it now, but I think most people will be better off waiting until the launch dust settles, more compelling titles are announced, and prices become more reasonable. I’ve personally decided to return a bunch of the software, but hang onto the headset. Here’s why.

As I said last week, the Quest hardware is impressive in the same ways as Nintendo’s Switch. Whereas Switch made a TV-tethered (low-end) game console totally portable, Quest makes a (low-end) console-tethered VR headset totally portable. And despite the fact that Quest brings a novel technology (inside-out 6DoF room-scale tracking) to the table, it’s remarkably easy to set up, letting people start experiencing something that feels very new with almost no friction.

There are only two real trade-offs, namely that Quest’s 2017 smartphone-class processor and battery life aren’t stellar, but they’re enough to make the device viable. So if you don’t expect to be blown away visually and can appreciate the combined value of a smooth onboarding process, brilliantly accurate controller tracking, and just-good-enough-to-be-immersive aesthetics, you’re going to have fun exploring Quest’s capabilities.

Even though there are problems with the pricing, I like the way Oculus has established its Quest store as part of the Home hub you’re in when the device turns on — with the option to browse and make purchases from a smartphone of your choice. Once you’ve set up an account, it’s very easy to make purchases inside or outside of the headset, and there’s no need to navigate either a PC-like file system or a convoluted VR environment to access your library, switch titles, or open a traditional web browser as needed. More functionality could be added to the Home hub, but what’s there works to let you amass and manage a Quest-specific software collection.

One capability I didn’t mention last week is something that PC VR users are discovering: PC-to-Quest wireless streaming apps. Under some conditions, Quest can be made to function as a wireless display for typically tethered VR apps and games rendered by a nearby Windows PC. If this becomes both reliable and easy, I could see Quest sales growing well beyond the limits of people who are willing to pay for Quest-specific software.

What’s wrong: Too many overpriced titles

Quest’s key issue is simple: Oculus assembled an ample launch library, but the price-to-quality ratio is generally off. Even if you ignore the $400-$500 investment required for the Quest headset, you’ll get stuck paying top dollar for ports of other platforms’ aging titles. Worse yet, the Quest versions are generally downgraded, with smartphone-quality visuals. Nintendo was smart enough not to charge $60 for its DS version of Super Mario 64 years after the N64 release, but Oculus is effectively doing that across the board.

Pricing matters, and in the nascent VR market, it matters a lot. High prices have kept most tethered VR headsets from coming even close to Sony’s PSVR, which even at a more aggressive $249 price has sold under 5 million units. Standalone headsets are a newer market, but it’s highly likely that the standard electronics pricing maxim — mass-market is $299 or lower — will still apply. 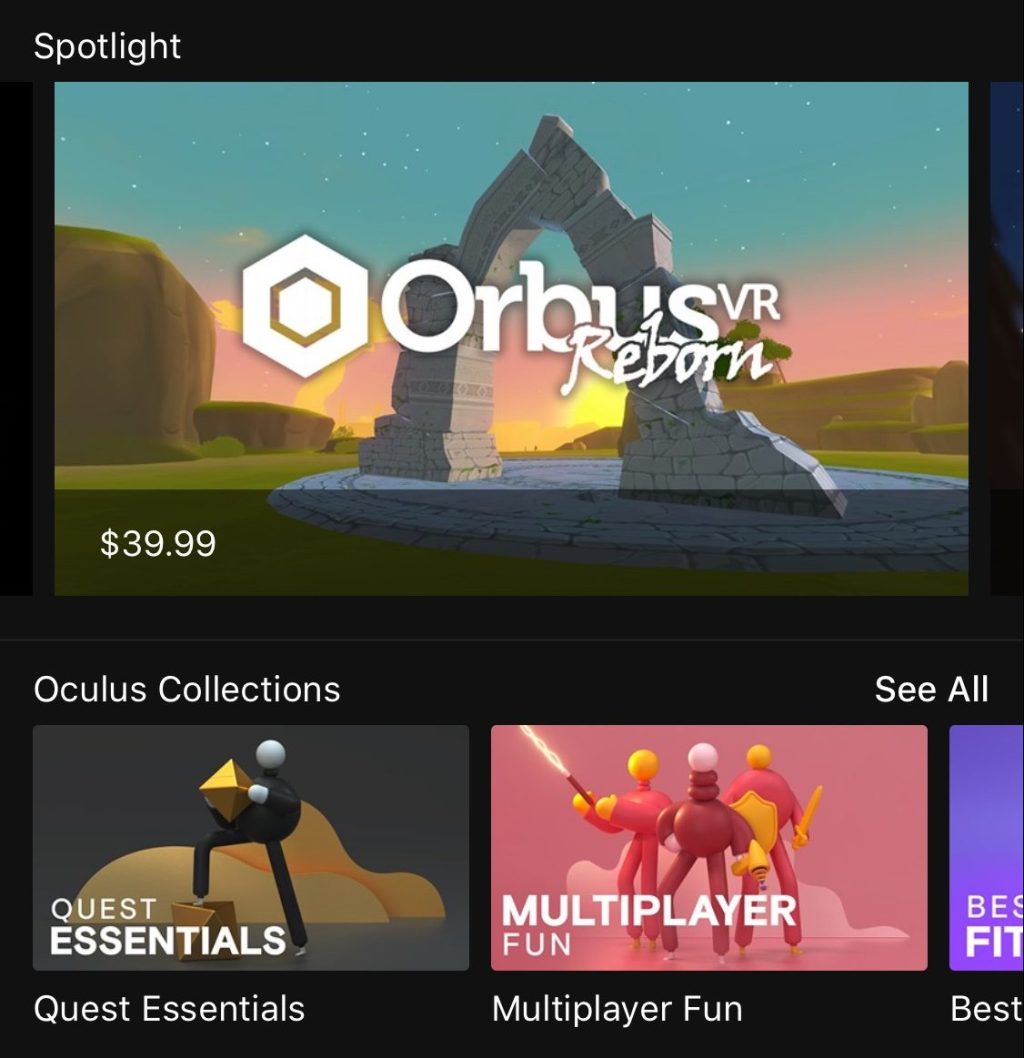 Software pricing is more complicated, but it suffices to say that Oculus’ current price scheme isn’t working. Every time I go into the Oculus Store and look through the titles and prices, I just keep saying “nope, nope, nope,” when that’s never my reaction in Sony’s PlayStation Store, Apple’s App Stores, or other online vendors. Who wants to pay $20-$40 for old games? Or mobile games? Not me.

Back in February 2017, I bought the Sony PSVR version of Thumper for $6, and it’s selling today in the iOS App Store for $5. Surprise, it’s $20 in the Oculus Store. Fruit Ninja, a fairly shallow, free-to-play mobile game, sells for $15 in the Oculus Store. The same “what are they thinking?” issue dogs many Quest games, which are currently being sold at or above their day one prices on other platforms.

As much as I want to support developers, and have heard the arguments (ports cost money!), selling old games at new prices doesn’t make sense. VR hardware and software companies alike seem to struggle with the classic economic tension between selling thousands of something at a high price and millions at a low price, often realizing too late that they’ve picked the option that led to an unsustainably small user base. There are numerous ways to make money on software, but turning interested users away is certainly not one of them.

The only offset to the high pricing is that Oculus makes it easy for you to decide whether a given Quest app is worth keeping. Every app you download can be returned within 14 days, with a full refund processed in around three days, so long as the total amount of time spent in the app is less than two hours.

That’s more than enough time for a demo — and in some cases, it may be enough to see everything the app has to offer. A prime example is Vader Immortal, Quest’s much-anticipated Star Wars “experience,” a lightly interactive story (read: not quite a game) that brings users face-to-face with Darth Vader, including a couple of opportunities to wield realistic-looking and -feeling light sabers. Although I liked Vader Immortal, I quickly found out why it’s only $10: The story lasts for less than an hour, leaving only a lightsaber practice mode — not enough for me to want to keep the title in my library.

Because of Oculus’ return policy, I was willing to check out Vader and a bunch of other titles that I’d normally have skipped for various reasons. Though I’d gladly give up being able to return them in exchange for lower prices, the current system works as a mechanism for sampling software in the absence of app demos. Eventually, it may even compel developers to hook players for well over two hours, lest they lose revenues.

My single biggest disappointment with Quest is that there are only a few titles that feel like they’re worth their asking prices, and there’s nothing (yet) on the horizon that has me excited about Quest’s future. Unlike the PSVR, which has done a great job of keeping its software release schedule exciting and offering frequent sales to encourage impulse purchases, Quest might be waiting a while for higher-quality software.

When I look through the current catalog, there are some obvious highlights, and I’ll be the first to admit that one or two of them might justify a Quest purchase for some people. Beat Saber is a superb combination of music, a sci-fi VR interface, and arm exercises, with lightsaber tracking that feels superior to last year’s PSVR release — even if the visuals are slightly downgraded. Some people might feel similarly about the deliberately polygonal action game Superhot VR, though its linear single-player levels aren’t likely to bring players back as many times as with Beat Saber. I almost never double-dip by buying games twice for different platforms, but if I was going to do so, Beat Saber would be the one, and Superhot would come close.

There are a handful of other apps that will appeal to specific audiences, too, though they’re not really A- or AAA-quality. The best of them, in my view, are the reasonably priced arcade shooter Space Pirate Trainer, a competent but pricey boxing game Creed, and the very solid dancing game Dance Central. Some people will like the approachable, low-intensity platformer Moss and a few other titles as well.

On the other hand, there were two other titles that quickly made my returns list: the wingsuit flying game Rush, and the first-person action-adventure game Apex Construct. Rush felt like a glorified smartphone game — fairly basic in premise and only OK in visuals — while Apex Construct appeared to have a much deeper world to explore, but suffered from so many technical and control glitches that I just couldn’t enjoy playing it.

Quest’s coming soon list is short and not especially noteworthy: Oculus itself lists obscure titles such as Raccoon Lagoon, Fujii, and Swords of Gargantua, while third-party game lists mention a handful of other titles — nothing of Beat Saber’s caliber, and certainly nothing with the production values of Sony’s PSVR exclusives Astro Bot, Blood & Truth, or Tetris Effect. This could (and hopefully will) change at next week’s E3, but until I hear some seriously compelling names confirmed for the platform, I’m not going to get my hopes up.

For the time being, my Quest feels largely like a Beat Saber machine, though if I was a PC VR user, the prospect of trying PC-to-Quest wireless streaming apps would be at least equally exciting. Though those are arguably two narrow use cases, I think that there are enough customers in each category — as well as developers who will be working on new waves of gallery, museum, and enterprise apps — to keep the Quest headset production lines busy for months to come.

As I said above, I wouldn’t recommend Oculus Quest to everyone, but I do think there are several types of people who will be very happy making purchases right now. You’ll be most likely to keep a Quest if you meet one or more of the following criteria:

On the other hand, there are several types of people who are less likely to want to keep Oculus Quest after trying it — at least at this point, with pricing and the software catalog where they currently are. People I’d say are likely to be on the “skip” or “try, then likely return” list would be:

I feel pretty convinced that Oculus Quest and wireless headsets in general represent the future of VR. If you’re interested in giving Quest a try, I certainly don’t want to dissuade you from doing so — it’s very cool, and if you’re willing to make a bet that there will be enough (reasonably priced) software in the future to justify your expenditure, go for it. You can return the hardware and the software if you don’t think it delivers enough value.

My belief is that Quest will have a pretty strong launch thanks to enthusiastic early adopters (and a lot of F8 attendees getting headsets from Facebook for free), then will need some more software and more aggressive pricing before most people are willing to take the plunge. The next step for Oculus will be to keep Quest owners actively using their headsets rather than letting them gather dust or returning them — a challenge that all VR headsets face, but which a socially driven device might be best suited to conquer.