The current console generation is almost eight years old now, and you don’t stick around that long without going through some changes and picking up a lesson or two. That’s what I’m assuming, anyway; it’s possible nobody learned a thing in all this time. But just for fun, let’s take a look at how some of the characters we met in our Xbox 360s and PlayStation 3s have grown. We’ll look at changes in their character models over the years and also see what kind of enduring wisdom — if any — they might have picked up on their adventures.

Above: Nathan never did get that shirt-tucking thing figured out.

The hero of developer Naughty Dog’s PlayStation 3-exclusive Uncharted series doesn’t look a whole lot different now than in his first outing. He’s pretty attached to that haircut, for one thing. But thanks to improvements in graphics, processing power, and other technical things I could pretend to know about but won’t, his look has evolved slightly. Uncharted 3 Drake has a generally more dour bearing than Uncharted Drake, which makes sense considering the darker tone of that game.

The lesson: “Don’t get attached to material things. I’ve destroyed every vehicle I’ve been in and wiped at least four long-lost ancient cities off the face of the planet. If I cried about it every time one of those things happened, I’d just be sad all the time.”

Above: People may change, but Elena’s tank top remains.

Drake’s love interest through the three console titles has gone from a wide-eyed innocent to a streetwise, globe-hopping journalist. She’s more proactive, and her relationship with Nate is increasingly complex and prone to stern talkings-to, as the pictures above suggest. But she always seems to look to the right. That’s kinda eerie.

The lesson: “Never get into a car with Nathan Drake.” 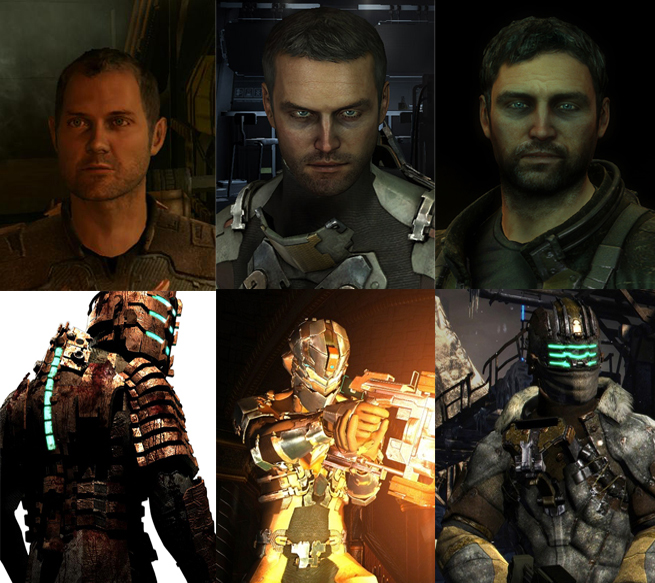 Above: Think about poor Isaac the next time you think you’ve had a bad day at work.

The beleagured engineer, star of developer Visceral Games’ horror series for the Xbox 360, PlayStation 3, and PC, doesn’t talk in his debut game (unless screaming counts), and you can’t even get a good look at his face unless you move the camera at just the right moment during the opening cinematic. And, boy … he looks different in that game. This is going to sound weird, but does anyone else think he looks kind of like a Ghostbuster? Visceral toughened him up and gave him some lines in the second game. In the third installment, he just looks tired and worn-down, which I’m sure is wont to happen after you have to stick a giant needle into your eye to pull the crazy out of your head.

Isaac’s suits have also changed over time, transitioning from the imminently practical — and increasingly ridged — engineering suit in the first game to lighter, sharper, more Sauron-like combat suits in the second. Dead Space 3’s cold-weather gear sits somewhere between the two, offering armor to protect against Necromorphs and a stylish fur trim to keep him warm while running for his life in the snow.

The lesson: “You really never know how long a repair job is going to take.”

Above: Even She-Hulk wants in on the fun.

Developer Volition’s increasingly bizarre, open-world crime series boasts a character-creation system that lets you make your hero look pretty much any way you want. Do you want to cover their body with tattoos? Go for it. Do you have a hankering for purple skin? You can. Do you want them to have a grotesque, concave face and giant eyes that extend far beyond the point of physical possibility? Volition is not going to stop you.

The funny thing is that while your character might change faces, ethnicities, or gender between games, it’s always supposed to be the same person. Kind of like The Doctor from Doctor Who, but crime-ier.

The lesson: “Life changes pretty fast. One day you’re a fat guy — the next you’re a tall woman. And then you start sounding inexplicably  like Nolan North. But just roll with it.”

Above: That sweatshirt has seen some shit, you guys.

The voice actor who plays both Nathan Drake and some versions of the Saints Leader in Saints Row IV also speaks for Desmond Miles, the hero of the first five entries in Ubisoft’s stab-happy, open-world Assassin’s Creed franchise. This is an odd case because due to changes in development teams, game engines, and design decisions, he looks completely different in every game. If it weren’t for the omnipresent hoodie — which appears even in the abstract version of the guy who is trapped inside the history-reliving machine in 2011’s Assassin’s Creed: Revelations — you might not even know he was the same person if you weren’t playing the games.

Above: Seriously, has this ever happened before?

We’re ending on one of this generation’s more interesting characters, particularly in terms of how players relate to him. Ezio Auditore da Firenze is unique among video game heroes for the simple fact that we follow him through his entire life. We’re there when he’s born, see him grow up and become a man, and then we follow him to his retirement. And if you watch the standalone animated short Assassin’s Creed: Embers, you even witness his death.

Have we ever before spent so much time with a character that we feel like we’ve known them forever? At the end of Revelations, Ezio addresses a farewell speech to Desmond, who is watching things from the future. And the old Assassin is not just putting his life and work into perspective for his descendant. He’s talking about the time we’ve spent with him over the past three games. In this scene, he’s describing the relationship between characters and the players who control them. It uses one of the generation’s most familiar heroes to say something about what we do when we play games, and it’s one of my favorite moments of the past eight years.