The X-Files: Deep State is a mobile game that blends casual mechanics with a thorough and engaging narrative in the style of the show. The players are invited to take on the role of a rookie FBI agent who, through a series of unfortunate events, crosses paths with a global conspiracy involving shadow governments, fringe science and, possibly, nefarious aliens.

At the beginning of The X-Files: Deep State development, we faced the question of what, exactly, do we want this game to be. We knew that, storywise, we wanted it to represent the best of what the show itself had to offer, but what was it exactly that entranced us in the source material?

This question, in one way or form, faces every developer working on an adaptation of a known material. Sadly, too many devs blindly follow the successful formulas of the source without examining why exactly have they worked. More often than not, these things we perceive as cornerstones turn out to be derivative from a hidden core of ideas, and that core — the true source of success — hides beneath the surface. As times change, the derivatives may have to change as well, but a good core is timeless. A good adaptation, then, has a clear vision of its core and is able to separate, and if need be change, the derivatives.

What is in the core of The X-Files?

After some debates, we came to the conclusion that what makes The X-Files so engaging is its visionary work with societal fears. It takes our innate insecurities as a people and places us in a world where they are all real. What’s really thrilling about that world, though, is that it’s only slightly hyperbolized. The things it describes might not be true, but they’re not as far from being true as we would want to believe.

The trick, then, was to understand how the things we fear had changed in the twenty plus years since the show premiered. Strangely, the shifts appeared to be simultaneously tectonic and insignificant, as though the giant pendulum of history had swung both ways.

The core story of The X-Files always revolved around the distrust we harbor against our governments. We entrust the government with unimaginable power in good faith that this power will be used under the strict rule of law. But what if it isn’t? How do we know that this faith is not betrayed, and what do we do if it is?

The relationship between society and government, at least from our perspective, changed drastically since 1993, when the show premiered. Back then the government often was presented onscreen as a sinister, all-powerful force. It was dangerous, competent, and not entirely trustworthy. In 2001, there was a public rush of patriotism and support for the government, as anyone can see if they look up President George W. Bush’s approval ratings during that period. In the aftermath, though, more and more people began to ask themselves if this trust was, perhaps, misplaced. 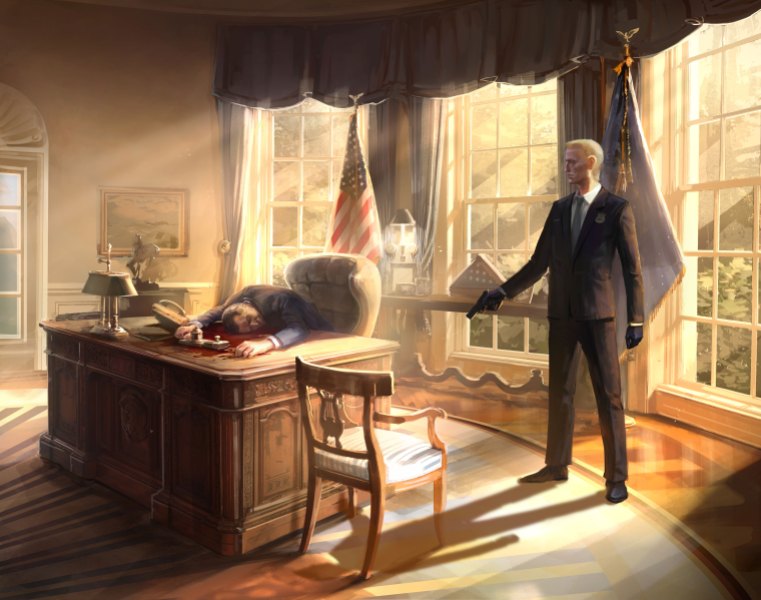 Above: The X-Files: Deep State

In the new era of the Patriot Act and Guantanamo Bay, where the government was entrusted with potentially terrifying means of breaking the same laws meant to keep it in check, a lot of people started to feel nostalgic for the good old days. Soon after, the perception shifted once again, and the government ceased to be portrayed as sinister and started to often be portrayed as dangerously idiotic. To tell it simply, in the past twenty years we went from looking on the government through the prism of The X-Files, to The West Wing, to Veep.

However, at the beginning of our production in early 2016, with presidential elections looming over the horizon and bitter political campaigns clashing on screen, the perception shifted once again. The election where one candidate was actively being investigated by the FBI and the other’s platform seemed to be built entirely on xenophobia and fearmongering showed us that the fundamental conflict of The X-Files was as topical as ever.

The X-Files’ paranoid view of the world, disturbingly, came back in force.

But its particulars have changed. The things we perceived as taken from the pages of science fiction dystopias back in the ’90s not only became technologically possible, but actually true, as shown by the recent illegal wiretapping scandals. The phrase “they’re watching you” was suddenly not funny anymore. Turns out, in the world of modern technology it is our right to privacy that was the fiction. In 1993, the idea of a device that can listen in on your conversations, monitor your behavior and know your whereabouts at all times seemed far-fetched, today we stand in lines to get the latest model. Our shops are being run by robots, our political views are formed by machine algorithms, and as if it wasn’t scary enough, the system is wide open to manipulation.

The truth is, indeed, out there — more than ever — but it’s obscured by a world wide web filled with lies, bubbles of skewed perception and outright intentional sabotage. So, for us, the most interesting themes to explore were the technological advancement and the use of technology to manipulate and form public opinion, and also the relationship between power, legality, and truth. What would Mulder’s role be in today’s world? Would he be imprisoned like Chelsea Manning, exiled to Russia like Edward Snowden? We built our theories and started working to realize them, writing both overarching “conspiracy” chapters and traditional “monster of the week” stories for the game.

As time went by, though, we were surprised to see that many of the things we were planning to address have begun to come true. The government’s current campaign to discredit the free press, the open hostility between the president and the FBI, the many reports of government officials having clandestine meetings with representatives of foreign powers and private interest alike all sound like something that would end up on Mulder’s desk, but are, in fact, a real thing.

So what were we to do? We could base our stories on the more outlandish theories and urban legends to preserve the possible-but-not-actually-true formula of The X-Files, or continue with the old themes, even though they were not, per se, imaginary anymore. The thrill of the show was fun to experience because the things it showed were scary but not true. What happens if they’re scary and true? Would a story like that still be fun, or would it be too somber to enjoy?

The craziness went further once we announced the title of the game, “Deep State”. It was suggested by The X-Files creator Chris Carter, and we happily embraced it, being that shadow governments and conspiracies were always a cornerstone of the show’s story. However, shortly after President Trump was elected into office, we were a bit shocked to see that we, as representative of a Fox-owned brand, were ourselves being accused of being a part of a conspiracy. Some people accused us of trying, through subliminal messaging, to legitimize Mr. Trump’s claims that secret powers inside the government work to undermine his authority — as if The X-Files haven’t dealt with secret powers inside the government for more than two decades before he announced his candidacy.

The other unexpected development happened after the Russian hacking scandal. For us, as people raised in the post-Soviet states, it was especially interesting. Once again, the pendulum had swung both ways: we grew up during the time when screens were filled with villains of Russian descent, who then disappeared to make way for Middle Eastern antagonists, who then were replaced almost entirely by domestic enemies. For a time, the US reached the point where the most real threat to its statehood, at least in the public’s eye, was the US itself. And now, slowly, foreign threats make their way back to the screen.

At the time, we were working both on a story involving cyberterrorism and on a story involving the president being replaced by an alien clone doppelganger.  Suddenly at least one of these stories went from being outlandish to being anchored in reality, leaving us in an awkward position of not knowing what to do with it.

Maybe it would have been better to write a story about an eccentric billionaire sending sports cars to space, spontaneously inventing compact flamethrowers and planning to colonize Mars. That’s crazy enough to never happen in reality, for sure…right? 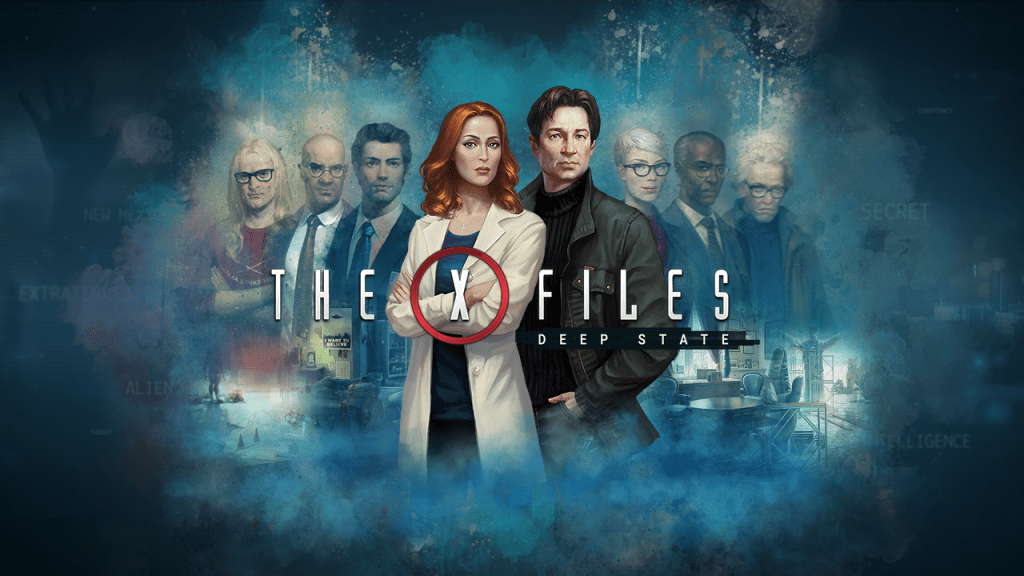 Above: The characters of The X-Files: Deep State

Back at the roots of the development process, we became aware of the challenges facing anyone tasked with adapting a known material. We needed not only to stay faithful to the source, but also to examine how the changes in the world we live in affected its core premise. As time went by, the urgent need to evolve became even more apparent. The world not only changed, it kept changing in front of our eyes at a rapid pace, forcing us to scramble to try and catch up.

All in all, right now the world seems to be in dire need of The X-Files type of stories, which are capable of examining the problems we face in an enjoyable narrative far removed from the divisive nature of modern day politics by a well-maintained wall of fantastical whimsy, even if this wall sadly looks thinner with each day.