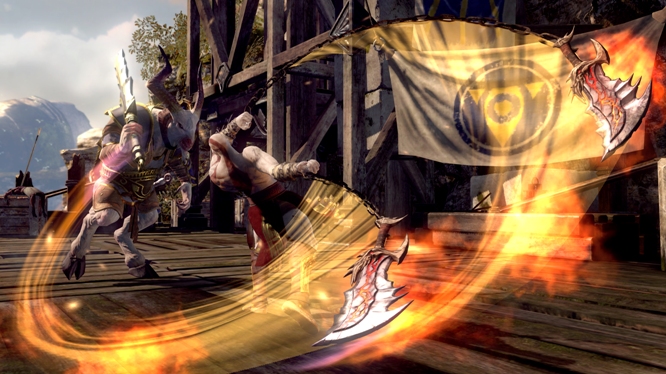 New story, new moves, new enemies, new levels…despite all that, God of War: Ascension still seemed “same-y” to me. The latest chapter — prequel, actually — in the mythological-themed action series didn’t pass the initial “this is a brand-new game” look test when Sony gave us a demo of the single-player campaign last week. No one would blame a casual observer for confusing Ascension with one of its predecessors. Skyscraping monsters, chain-blade-whipping combat, and limb-tearing brutality…yeah, we’ve seen that before.

But Luis Sanchez wouldn’t agree with that assessment. Sony Santa Monica’s senior game designer spent some time with GamesBeat and broke down in detail just exactly what’s new with this God of War, due out March 2013 for the PlayStation 3.

The softer side of Kratos

Canon-wise, Ascension “takes place before all the other God of Wars but after Kratos has killed his family,” Sanchez told us. That means our series star hasn’t yet bricked-in his soul to become the cold-hearted bastard we’re used to seeing him as.

In one scene during our demo, local villagers were running away from a pack of monsters who were lobbing spears at them. Two of them impaled their targets, but Kratos casually pushed the third civilian away at the last second, saving his life.

Casually. It’s not that Kratos is bleeding-heart softie in Ascension, but such a seemingly trivial act actually said a lot about his character development. Remember, this is the guy who will eventually have no qualms about throwing an innocent woman into a death trap just to solve a puzzle in one of his later games.  “Kratos saving someone is something we’ve never seen in any God of War,” said Sanchez. “We get to see a bit of his humanity, before he becomes just a rage machine.”

Kratos picked up some new Lego-game-like magic called the Lifecycle ability. “He can repair things that are broken or take things that are pristine and break them,” said Sanchez. “In addition to that, I can stop the process halfway and freeze the debris at that point in time. I can use this as a navigation tool…a path, but we can use this for puzzles as well.”

You won’t be able to use Lifecycle in the environment whenever you want — it only works in designated spots as determined by the level design. But it’s effective in combat as well. “You can blast these guys with Lifecycle, and they get slowed down,” said Sanchez. “It’s a good entryway into a combo.”

God of War didn’t invent the quick-time event, but it does rely heavily on the mechanic. Throughout the series, we see timing-based button prompts to advance highly choreographed (and quite exciting) combat scenes.

They haven’t gone away in Ascension, but the developers are mixing it up a bit. In one scene, a giant bipedal elephant monster grabs our antihero and puts on the squeeze in what looks to be another close-up quick-time sequence. Instead of waiting for the game to tell you what to do, however, you’d just take matters into your own thumbs. “You’ll see that there are no button prompts here,” said Sanchez. “I can do my two attacks — my light and my heavy — but I can also dodge out of the way. So the elephant is going to try to grab me [with his other hand], and then I can dodge left or right with no button prompts. This allows us to get really close-up with the action and keep it cinematic but give the player control of what’s happening. It’s very fluid.” 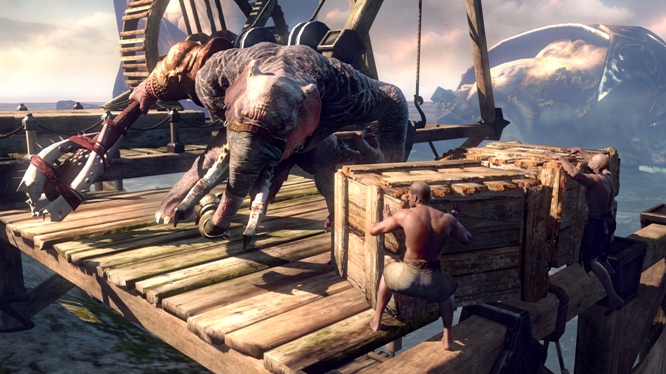 Various elements — at the very least fire, which is the only one Sony is ready to talk about right now — will factor into gameplay in Ascension. “If I’m infused with fire,” said Sanchez, “then my blades do an attack on the enemies where they become fire bombs and can explode and do area-of-effect damage to other enemies.”

Your foes can be naturally imbued with the elements as well: “Our Brute enemy, if you notice the inside of his helmet, is glowing with fire. He’s actually elemental-based, and we’ll have different variations of him using different elements. So one enemy might have different fight tactics compared to the same guy using a different element.”

“We created a new navigation system from the ground up for this game,” Sanchez explained.
“It’s more free-form and allows us to do interesting navigation paths, where before, [Kratos’ climbing] was very rigid. It was 90-degree movement and feels outdated now. We thought we’d update that whole system.”

While Kratos has had access to secondary weapons before, they’ve always been a part of his set inventory. In Ascension, he can pick up killing tools from low-level enemies and use them. So far, we’ve seen a sword, spear, and club, but the player can “exhaust” them for super attacks as well. “I can discard the sword, and it gives a powerful attack which can stun large enemies,” said Sanchez. “With the spear, I can discard it [as well to] rain spears down. All environmental weapons have a special discard, so while you get rid of it, you get a special attack out of it.”

Kratos can now continue a weapon combo with his bare hands or kicks, showing a little versatility in his combat skills.

“The other cool thing we added was a tether,” said Sanchez. “I can stick one [chain] blade into an enemy and drag him around. Then with my other blade, I can attack other enemies. Then I can swing him around and use him as a weapon. So it works for different play styles. You can use it for crowd control, or you can use it as an offensive move. We’re trying to weaponize enemies.”

“We overhauled the Rage system,” said Sanchez about Kratos in souped-up overdrive mode.”Any positive action that the player does — whether it’d be hits, blocking, or parries — will fill up your meter. And once it gets full, you automatically go into Rage mode. And once you’re in Rage mode, if you continue doing positive actions, you’ll maintain that Rage mode. This is different from previous games where you had to activate it. There are some players who save that special, and they ever use it. It’s a shame because that’s a very powerful attack to use, so that’s why we chose to go this route and reward you for kicking ass.”

Now, Sanchez admitted this could lead to situations where Rage kicks in just a player offs the final enemy in a scene, wasting the special effects. “That could happen, but every fight scenario [we’ve designed], you’ll be able to use Rage.”

Whew. We certainly wouldn’t want Kratos to get all worked up with no one to tear up into bloody bits.