Figuring out how many game jobs there are in the world is a laudable goal. But it’s easier said that done.

But the iPhone changed that starting in 2008, when the app store opened. And now mobile is the biggest part of the industry, with $40 billion in revenues, according to SuperData Research. That caused an explosion of new indie game companies and it changed the lives of many indie developers.

I’ve collected data for this story with special independent research provided from job posting site Indeed.com and market researcher SuperData Research. I gave a talk on this subject at Casual Connect Europe, the big game event in Berlin last week. Here’s an edited transcript of the talk, and the slides are here. Here’s the video version of the talk. I have since added additional details in the text below. –Dean

Much of that growth was serendipitous. But can regions influence that economic growth for their own reasons? Theoretically, you can design policies to make that growth happen deliberately. That’s what this story is about.

But in some ways, this is an unfinished presentation. It’s not because I didn’t know how to use PowerPoint, but more because there isn’t really a simple answer to the problem I was looking at. How do you create jobs? How do you grow your region when it comes to the game industry?

I tried to dig out some data, but I’m not done. What I’d like to have one of these days, from someone like maybe Nick Berry of Facebook here, is a real-time picture of the world that shows all the jobs, companies, and revenues in the game industry in a visualized map of the world. Nobody has that yet. As far as I’ve been able to dig up, looking for this data, it doesn’t exist. If somebody does it, maybe they could collect it once a year, or once every five years, or on a particular country. But it’s hard to find.

I gave a series of talks in Japan about this as well. We’re going to do some more updating along the way. On the third bullet point here, we have our GamesBeat summit in May in Berkeley, and our GamesBeat 2017 conference in October. This is a topic we’ll go into, and also into the inspiration cycle between science fiction, technology, and games. That cycle, to me, is one of the explanations for how and why you can create games in a particular region. Silicon Valley has all of those things, and it has helped. Los Angeles has all of that in Hollywood. These are models to follow.

The gaming world is flat

I’ve been lucky enough to travel around the world. This is my fourth trip to Berlin. I believe Berlin’s tolerance and openness to immigrants will become one of its fundamental advantages in attracting game talent. These trips to different game hubs around the world have taught me that when it comes to jobs in the game industry and designing great games, the world is flat. 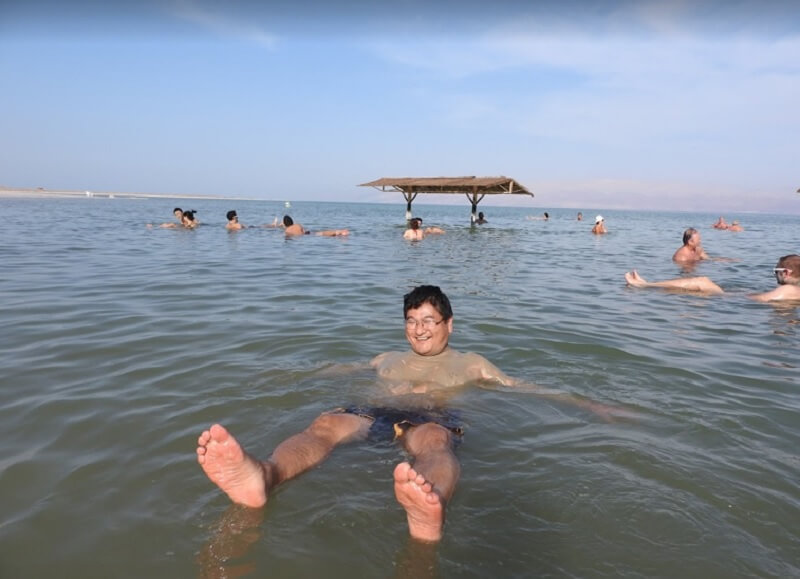 Above: Floating in the Dead Sea.

I stole that line from Thomas Friedman, the New York Times columnist, the author of The World is Flat. He also traveled the world, and figured out that the Internet, computing technology, and smartphones have equalized the playing field for competition. New technology can be created pretty much anywhere now. The Dead Sea is one of the places I went, doing research for this particular speech.

The Last of Us is my favorite game of all time, and I feel like it could only have been made in Los Angeles. It is a cinematic experience and finely crafted, with talent born from a studio that has been around for decades and access to the best of screenwriters.

But you can make a game anywhere. These two Siberian brothers I met at Casual Connect Tel Aviv, they grew up in the cold. They couldn’t go outside and play, so they played indoors, and naturally they gravitated to video games. They taught themselves how to make video games, and by the 15th game their company, MyTona, had a hit. This hidden object game had more than 30 million downloads. Eventually they had 100 people working for them in Siberia. So maybe one of the ingredients for creating a talented game work force is to have a cold climate.

When mobile came along, it equalized the playing field. Before that, PC and console gaming were very concentrated in parts of the world like Japan, the U.S., and the United Kingdom.