But some regions stay strong

But again, these regions keep coming back as the strongest in a lot of ways, across all of the industry. Can you duplicate that? Can you grow that from scratch? I don’t know. Sometimes it takes decades to grow your talent or specialty within games. 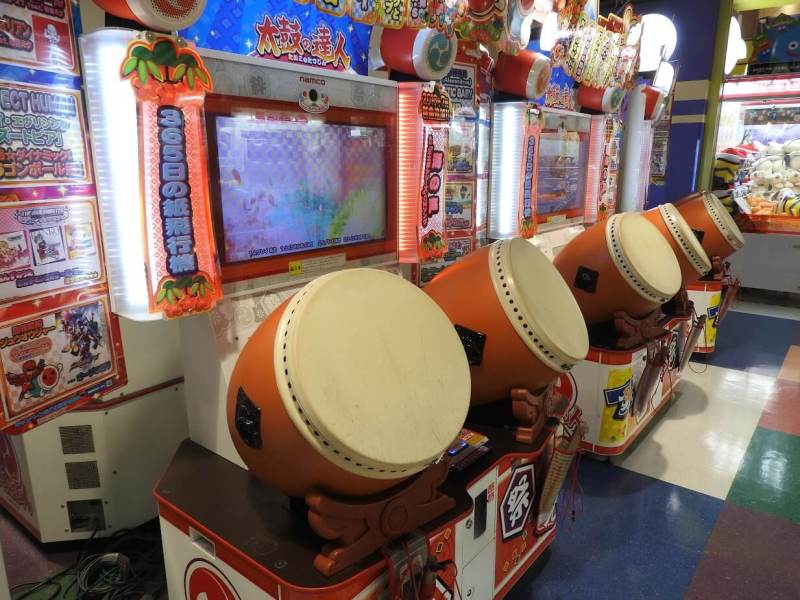 Above: Taiko drummer game in a Tokyo arcade, or “game center,” operated by Taito. It’s called Taiko no Tatsujin, or Taiko Drum Master.

Japan still has hundreds of arcades spread around its cities, and its people are inculcated with a strong gaming culture. The U.S. doesn’t have arcades anymore. The Japanese can use arcades as experimental locations for new games and new technologies. Virtual reality experiences are debuting in these arcades, already in place. In the U.S. we’re just talking about how we should maybe bring arcades back. Maybe it was a bad idea to lose them after all. 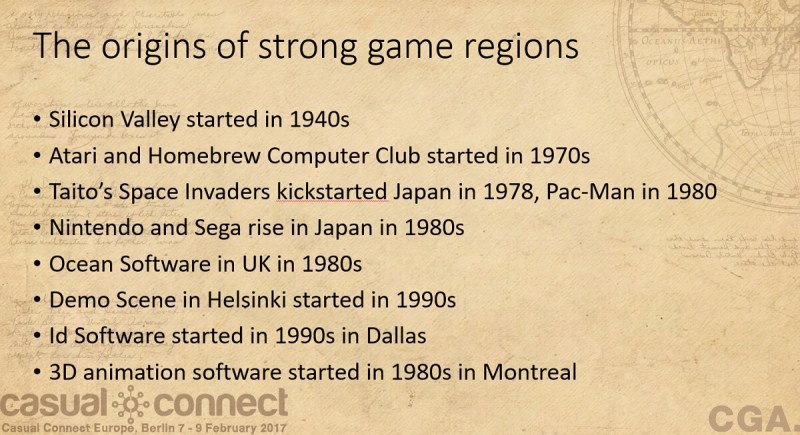 Above: Strong game regions got their start early.

It’s interesting to me that Atari and the first games came out of a region that had decades of computing platform experience behind it. Atari was born in Silicon Valley, and that was no accident. But each of these events listed here is a beginning point in time for a whole regional economy, built around games. It wasn’t Nokia that gave birth to Helsinki’s mobile industry. It was the Demo Scene and hacker groups that started quite a long time before. If your region’s not here, that just means you’ve had less time to develop your game industry.

The ingredients for a strong region 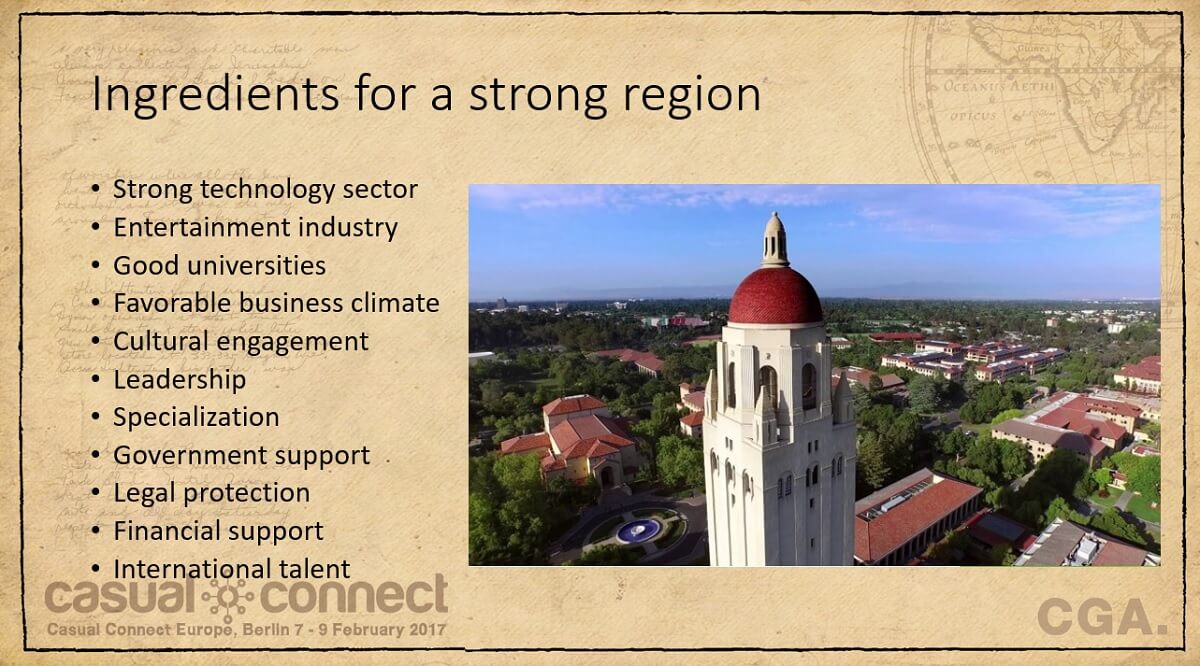 If you have a chamber of commerce sort of person, or regional development people who want to attract game companies to your region, this is the kind of slide you’d have. This is how you can make good things happen. Silicon Valley wouldn’t be there without Stanford University.

It’s instructive to follow some history here. Silicon Valley beat out Boston as the place where the computing industry would be. Boston was good at making mini-computers. It was a vertically integrated computing town. When the PC came along, it became a horizontal industry. Microsoft made the operating system. Intel made processors. PC companies like Compaq made hardware. Other companies made applications. That proved to be a very flexible ecosystem. Businesses could move faster in that environment. 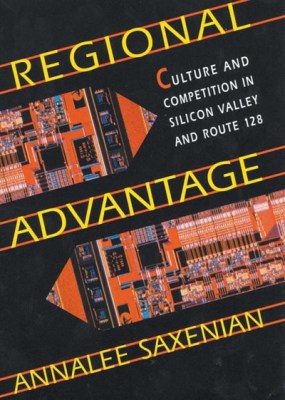 So Boston lost and Silicon Valley won. AnnaLee Saxenian wrote the book Regional Advantage that captured this story. It was a platform change that caused one region to die and one region to rise. The San Francisco Bay area is strong in games not only because there’s a tradition of game-making there, but because the platform owners are there. Oculus, Facebook, Google, Apple, Intel. Microsoft isn’t far away, in Seattle. That helps explain why the region is strong. There are a lot of game jobs in those companies, although they aren’t directly counted as game jobs.

The vertical versus horizontal competition is still playing out, and in some ways, they are counters to each other. Disney has shifted to a licensing model, where it is partnering with outside game studios to make games. Warner Bros., by contrast, has acquired or grown eight major game studios to make its own games. Warner hired many of the people at Avalanche Software, the studio that Disney shut down when it exited the Infinity toy-game business.

What is interesting about the toys-to-life business that Activision Blizzard created with Skylanders is that it has created some huge barriers to entry. If you want to participate in that business, you have to be able to create a line of toys, and make games that run on just about every platform. You have to make the portal-like hardware to digitize the toys, and you can also make TV shows or movies based on the characters. In other words, to participate in toys-to-life, you have to create a whole business ecosystem. Disney had this with Infinity, where it could sell the toys and games in its Disney Stores, and build the toys and games based on its movie characters. Activision has entered the TV show and movie business, as well as 3D printing of toys, to advance its Skylanders ecosystem. 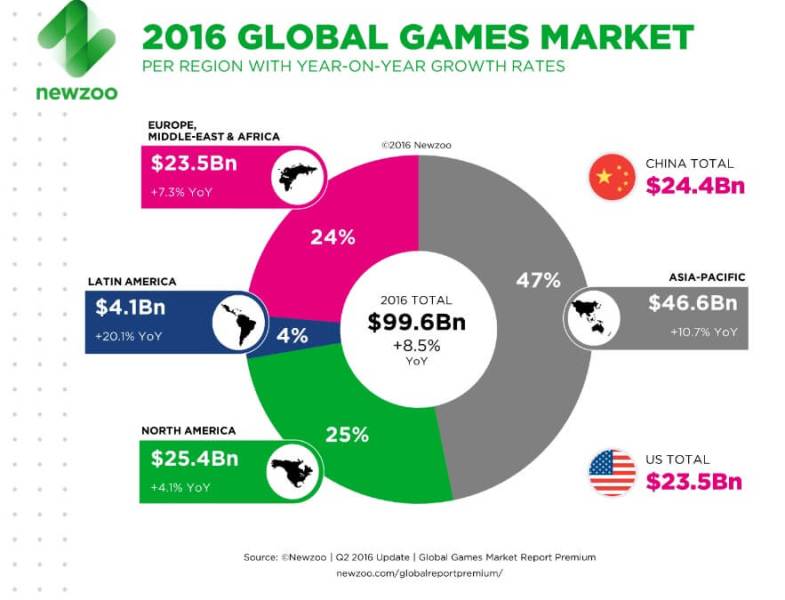 Where the game companies and jobs are 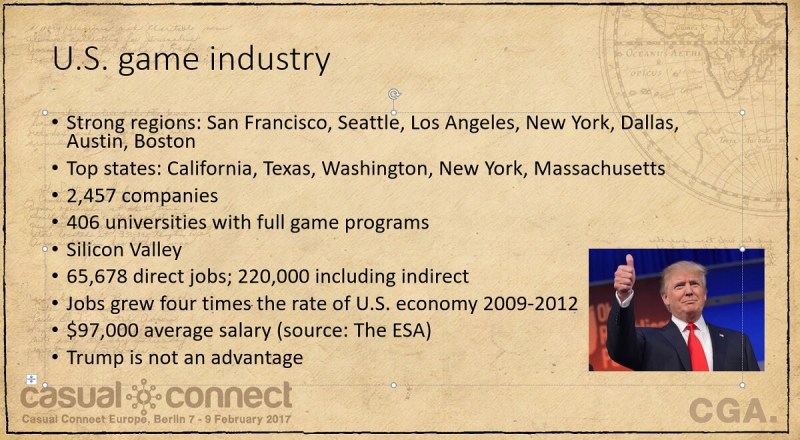 Above: The U.S. game industry stats

Here’s how the world looks as far as where global sales are. It’s worth noting that China, of course, is the biggest market for games now. We had some speakers earlier noting that mobile games are the biggest part of the industry now. SuperData Research’s data shows mobile games have hit $40 billion in 2016. Having strong regional game sales gives you an advantage, particularly if there are significant barriers to entry for foreign game companies to enter a market, like China.

SuperData created a series of slides for me on the numbers of game companies around the world. This is brand new data. There are 2,900 game companies in the U.S., 472 in Canada, 350 in Argentina, 880 in Brazil. These numbers show how strong the regions are relative to each other, but the number of companies isn’t the only metric that matters. The number of jobs is also important. I’ll expand on that point later.

The Entertainment Software Association, the game industry trade group in the U.S., collected some data they published a few years back. They counted 1,641 companies and 150,000 jobs directly related to games. Today, the ESA said there are now 220,000 jobs in games in the U.S. Of those, 65,678 jobs are direct jobs, while the rest are indirect. The number of companies is now 2,457. 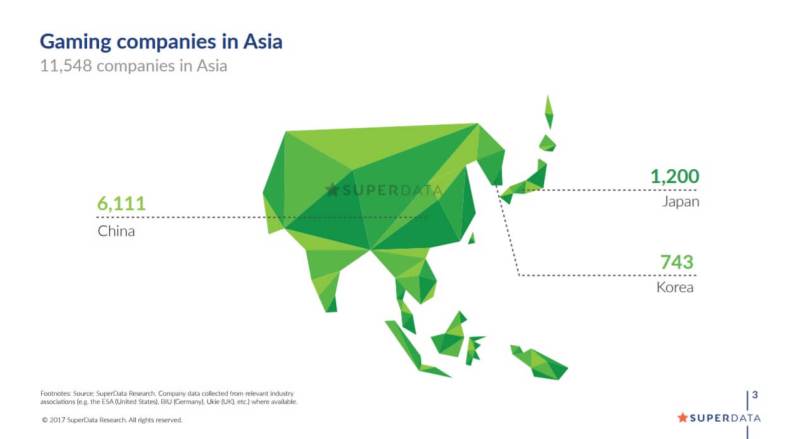 Here’s the SuperData data for Asia above. It’s pretty stunning to learn that 6,111 companies are in China. I thought it was just my imagination, or I was just really ill-informed, but when I went to China, to the China Joy show, I would talk to these game companies. I’d ask them how many employees they had and they’d say something like, “Oh, we have 1,000.” 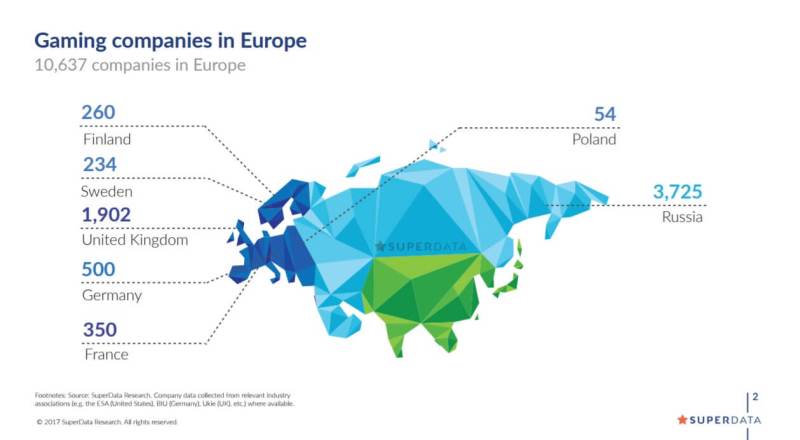 Above: Game companies in Europe.

Here’s some data on Europe’s game companies above, and the slide below has Europe’s game jobs data as well. The data for France is interesting, as Ubisoft skews the number of jobs higher. The international game giant has 10,000 employees across the whole company, but France as a whole is relatively small for such a large country. 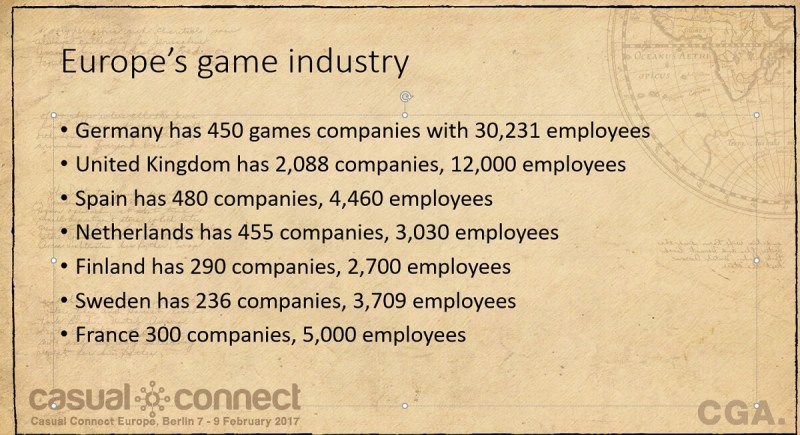 Finland stands out as one of the best examples of government support for the game industry. Tekes, the government funding agency, offers loans and grants for research and development work carried out by companies. Tekes pours hundreds of millions of dollars every year into hundreds of tech startups.

One of its best bets ever was investing €5 million into Helsinki-based Supercell, which went on to make the games Hay Day, Clash of Clans, Boom Beach, and Clash Royale. Supercell has only about 250 employees, but it generates well over $1 billion a year in revenues. And each year, it pays several hundred million euros a year in taxes. That’s a huge return for Finland. And Supercell itself was valued at $10 billion when Tencent bought majority control of the company in 2016.

Other countries have also helped their game startups in other ways. Estonia has an accelerator, GameFounders, which has been training game startups since 2012. The program worked so well at training game companies from around the world that GameFounders opened a branch in Malaysia. Sweden also has an accelerator, dubbed Stugan, out in the woods, where game developers get three months of training from industry veterans. 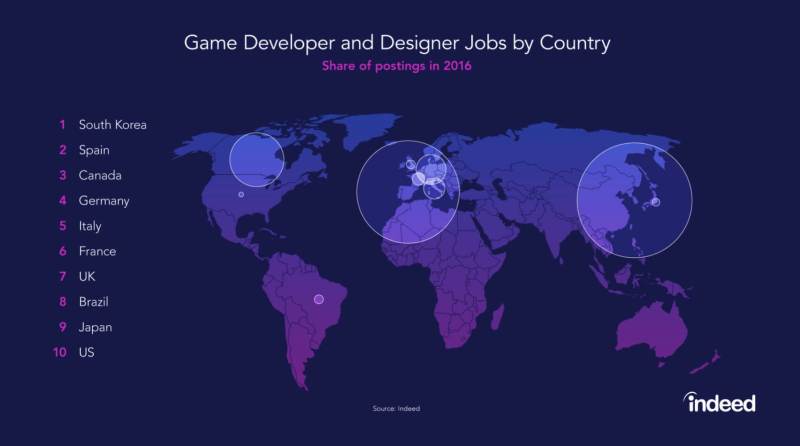 Above: The top countries in the world for game job postings.

This is also brand-new data from a job posting company called Indeed.com. A while ago they produced an interesting data point about the U.S. Since 2014, the number of job postings for games in the U.S. has gone down 65 percent, according to the postings counted by Indeed.com. I asked them to do a map of the world when it comes to job postings, and they actually crunched all the data and came up with this. South Korea has the most jobs posted in the game industry now.

Indeed.com did an interesting calculation in the fall of where the job postings are in the U.S. So it was able to come up with this list, which shows that around 24 percent of the jobs posted in the U.S. are in the San Francisco Bay Area. The Bay Area has about twice the number of game jobs as Los Angeles. Perhaps the key to understanding what is happening in the U.S. is understanding what is happening in some of its biggest cities. Dallas, which has been strong in first-person shooters, doesn’t show up on the list, while Reno, a hub for online gambling, does show up on the list.

Above: The top cities for game jobs in the U.S.

The U.S. is in tenth place, according to Indeed.com’s survey of the world’s game job postings. That makes me wonder what’s going wrong in the U.S. Where are those jobs going when it comes to the game industry? On the one hand, the U.S. has become too expensive to make games. On the other hand, it is the hub for new kinds of jobs, like virtual reality. The virtual reality category grew job postings 400 percent in a couple of years, while esports jobs are up 40 percent.

Spain is very high on the list. The acquisition of Social Point, based in Spain, puts the region on the map. Take-Two Interactive acquired Social Point for at least $250 million. In some ways, acquisitions can hurt a game region because it takes the decision-making power and moves it away from that region. That’s usually not good for employment at that company in the region. On the other hand, acquisitions create wealth in a region, and that can lead to new game startups. 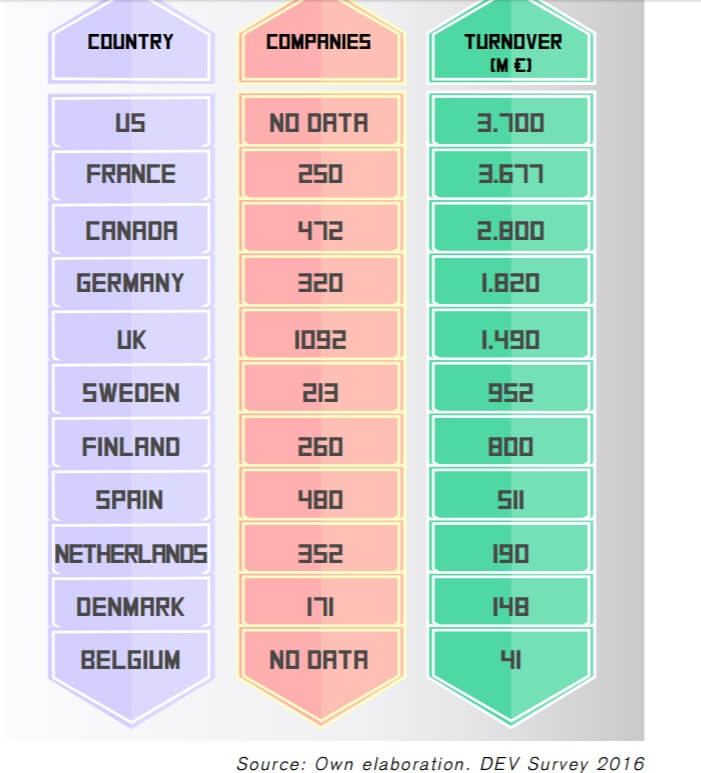 Above: Game stats by country.

Canada’s strength as a U.S. satellite

Canada’s strategy as a companion region to the U.S. is working well. You can have your headquarters in the U.S., but since it’s so expensive to hire developers in the U.S., you can set up shop in Canada instead and hire two or even four engineers for the price of one compared to Silicon Valley. All told, Canada has 20,400 game employees at 472 companies.

The presence of negative influences, like Donald Trump’s anti-immigrant point of view, can also cause the jobs in the U.S. to dissipate. Trump’s immigration ban and his desire to build a wall to keep out terrorists will also keep out talented game creators.