I was two hours into Where the Water Tastes Like Wine, and it felt like America had run out of happy stories. But the people were hungry for them, so I kept on searching. That’s your job in Dim Bulb Games’s debut effort: to travel the U.S., collect people’s tales, and share them with folks you meet along the way.

It’s a magic realist adventure steeped in Americana, and it’s out now on PC. It’s charming, but I encountered a few issues that made it difficult to truly enjoy my travels.

I Heard It Through the Grapevine 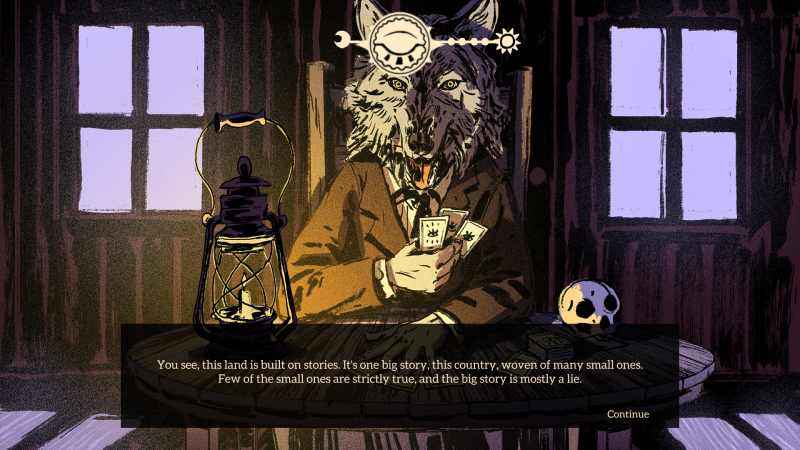 Where the Water Tastes Like Wine has assembled a talented cadre of writers and voice actors, including the musician Sting. The stories are intriguing, hinting at a multitude of unknowable lives all around you, some of which are mysterious and uncanny.

These appear as small bits of text-based interactive fiction with evocative hand-drawn art. Sometimes, your choices will influence the kind of story you end up with. It’s a lot of fun to collect them, and it’s even more enjoyable watching them evolve.

You can have two kinds of encounters as you’re traveling around: collecting stories, and hearing stories. After you’ve collected a few tales, you’ll find that others start sharing your stories, morphing into tall tales in each retelling. Even if you try to dissuade folks from embellishing the truth, you’re helpless to stop word of mouth. Bit by bit, you witness the birth of myths like Pecos Bill and the Sasquatch, and eventually you accept that these stories belong to everyone — even if it happened to you, and even if they become in part untrue.

(What A) Wonderful World 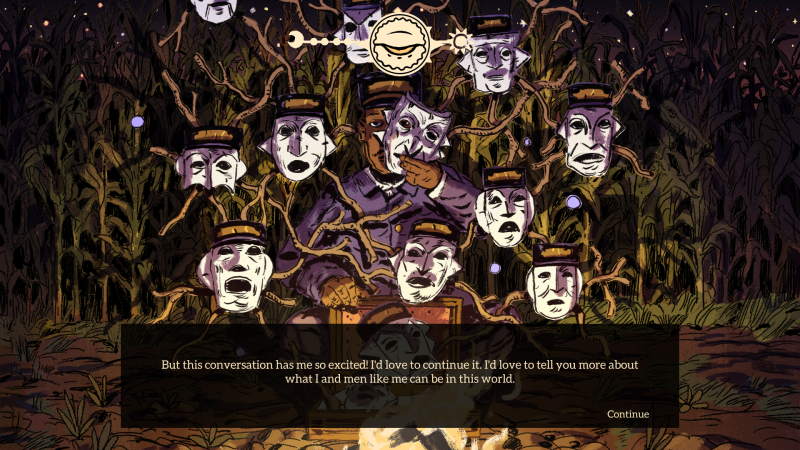 Above: After you’ve met a character enough times, they’ll tell you their truth.

It begins with you losing a poker game to the Dire Wolf. He indentures you to go out and collect stories and explore the great tapestry of lives that make up the country. And he gives you the power to see the “true shapes of people,” which you discover after meeting with them a few times.

As you hitchhike, you encounter small farmers, construction workers, and other folks just trying to get by. The people you’re searching for are 16 archetypes — the miner, the blues singer, the hippie, the sailor, the medicine woman. These are the true stories you seek, the strands that shine brightest in America’s tapestry.

When you find the archetypes, you can sit down at a campfire with them and swap stories. All the tales you’ve collected are in your inventory, sorted by topic and feeling. They’ll ask you for scary stories or sad ones, and you have to try to spin a yarn that will please them. You can’t re-use the same story twice, so you’ll have to switch out which stories are active before you sit down at the campfire. If you haven’t found enough tales, you also won’t be able to progress in your relationship with them.

It’s a clever mechanic, one that replicates the feeling of sitting down with a friend or new acquaintance and searching for memories to share. Sometimes the way I interpreted a story was different from how they viewed it. The more you tell them stories that they enjoy, the more they open up to you and share their own histories.

These Boots Are Made for Walking Above: Hitchhiking with a terrific view.

Where the Water Tastes Like Wine’s landscape has a unique aesthetic. The sky looks like it’s been painted with rough brush strokes. It’s a mix of low-poly mountains and textures, popping with gorgeous colors, especially as night falls. And as you travel, you encounter new features — the mesas appearing through the Southwest mist like ghostly statues and the tiny palm trees dotting the beaches of the West Coast.

Each region also comes with its own soundtrack, switching from blue grass tunes to Mexican-inspired folk songs, which makes for good company while you’re wandering.

The Sound of Silence Above: You can’t just cross a river wherever you want, so back to hitting the road it is.

Where the Water Tastes Like Wine can be gorgeous, and the songs are a treat. But traveling is a pain. This is kind of a big issue since you spend most of this game trying to get around. The main problem is you move … really … slowly. You have a few alternative ways to travel, like hitching a ride on the freeway or hopping a train. But these comes with their own caveats.

Roads only go one way, for instance, so if you’re heading north but everyone is driving south, then you’re out of luck. And if you hop a train without paying, you risk getting caught by the foreman and beaten. So often you might just find yourself trekking along at a snail’s pace, encountering great stretches of land without any stories to collect.

This makes for a monotonous experience. Other problems include the looping soundtrack and the interminable landscape, which doesn’t feature any weather and begins to look all the same.

Blowin’ in the Wind Above: Rick, buddy, I just saw you in Boston. How’d you get out here so quickly?

The country feels sparse, which can sometimes be liberating. It wouldn’t be realistic, after all, if it were densely packed with stories. Other times, it can be boring.

When you collect tales, they’re often characterful and creative. The process of hearing a story, though, is repetitive. A handful of events occur when you arrive at a location that will enable you to evolve a story — the construction workers, the man reading a newspaper, the movie star — and it gets tiresome after a while. I found myself clicking through quickly and just checking the notification in the top left of the screen to see how the story had changed.

I was also disappointed in the exclusion of certain stories, which I associate with the American experience. I enjoyed speaking to most of the archetypes, but a few I felt were wasted opportunities. It didn’t do anything with Chinese railroad workers or with the rich culture of New Orleans. Instead, we get characters like a beat poet who just wants to talk about his breakup, which I didn’t find compelling at all. 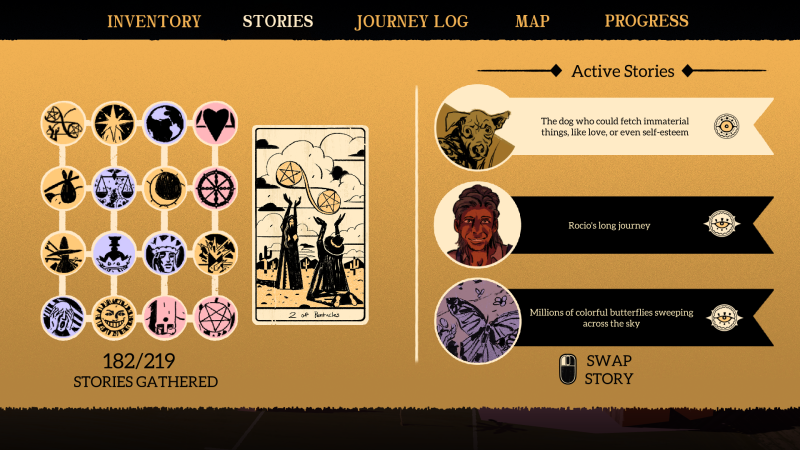 Above: Your inventory, where you can change which stories you can tell during the course of a night.

I encountered a few technical bugs, most of which were just a little annoying. Once, it told me I’d successfully hopped a train and snuck out without being caught by the foreman, but my health still registered as zero, like I’d been caught and beaten. I also experienced some stuttering as I was moving around.

However, the biggest disappointment was how I missed out on what I can only assume is the true ending.

The Dire Wolf has three chapters to his story. Whenever you die, you find yourself at a table with him and you can share tales with him. Share enough true ones and you’ll unlock the next chapter.

After I finished unlocking all of the archetypes’ true stories, I assumed that I would be able to change my load-out of tales to share with the Dire Wolf before I met him again. However, it didn’t give me any warning, so before I could open my inventory and switch around which stories I wanted to be active, it just sent me straight to the last chapter. This was an unpleasant surprise, and I ended up not being able to unlock his full story because I’d already told him most of the tales that were active.

Once this happened, I tried reloading the game and dying to see if I could have a do-over. But no dice. I was stuck with an anticlimactic ending with no way to get back to the Dire Wolf’s last chapter.

I love the idea of Where the Water Tastes Like Wine. It has a lot of personality, and several days after I finished it, I was still humming some of the songs to myself. However, it’s impeded by a few gameplay quirks, like how tedious it is to move around. And most of all, I’m still very disappointed by how I wasn’t able to see the final chapter through to the end.

It’s to Dim Bulb’s credit, though, that I wanted to hear what the Dire Wolf had to say. If the story wasn’t compelling, I’m not sure that I would care as much.

Where the Water Tastes Like Wine launches on February 28 for PC. The publisher sent us a code for review.