Where Thoughts Go is a social network that takes the form of an ethereal virtual reality world. Visitors leave anonymous voice logs that appear in the dreamy environment as little creatures that flit around in the air. It’s the latest VR project from indie developer Lucas Rizzotto, who plans to release an early version sometime in 2018 on platforms to be announced. He will also be showcasing it at festivals and events.

“I like to build realities around the story, and the premise of Where Thoughts Go is that there is an alternative reality where all human thoughts exist as tiny creatures,” said Rizzotto in an email to GamesBeat. “Like our memories, these creatures are asleep most of the time, waiting to be ‘awakened’ and remembered by the visitors who roam Where Thoughts Go, only to return to their slumber after you’re done.”

To house people’s thoughts, Rizzotto created a space that looks vast and somewhat lonely. But it’s also beautiful. Its terrain is striking, an alien version of the real world with stark snowy peaks and lush violet glades. Each location prompts visitors with a question that they can choose to answer with an audio log.

“The colors, reflections, dreamy visuals and open spaces are all designed to make users feel relaxed and safe, while also containing visual metaphors of their own,” said Rizzotto. “The soundtrack, on the other hand, is a choir being sung by the thousands of thoughts roaming the sky in the distance. But all of this is there to serve one singular purpose: making the experience of listening to people’s stories more emotionally powerful.” 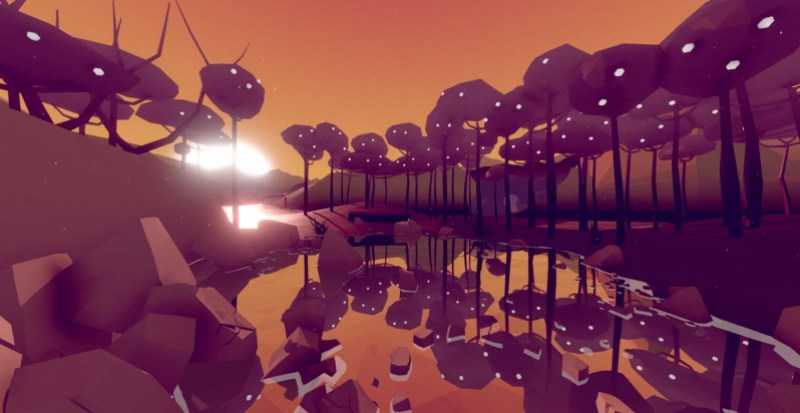 Above: One of the environments in Where Thoughts Go.

Unlike other social networks, which may serve to curate an online personality or “brand,” it’s an experience that seems to prioritize open catharsis and empathy. It’s more akin to projects like PostSecret or apps like Whisper, where people confess their secrets. Because of that, it’s important for folks to be anonymous when they leave voice recordings in Where Thoughts Go. Rizzotto has built privacy tools that can be used to mask people’s voices. And he says he won’t be collecting any personal information aside from an email address for log-in purposes.

“Anonymity is essential. Where Thoughts Go is an experience that asks very personal questions and we want all our visitors to feel like they can answer them truthfully without any judgment,” said Rizzotto. “Anonymity plays a key role in creating a safe space that compels people to open up when they otherwise wouldn’t, and it also feeds into the general message of the experience: the people you hear could be anyone in your day-to-day life.”

The voice recordings will continue to be stored until their creators choose to remove them. However, they’ll also move around in the environment, the way a living creature might wander from place to place. When a user logs into the world, only a certain number will appear around them so that the space won’t feel too crowded. It sticks to its conceit that people’s thoughts inhabit this world and take on lives of their own.

Rizzotto says that he feels that most social VR is a “lost creative opportunity” because it focuses on recreating human interactions directly in VR without incorporating creative world building or redefining the way people engage with one another. He wants Where Thoughts Go to be a space where people can interact in ways that aren’t possible offline.

Above: A wild thought appears.

Though Where Thoughts Go is focused on a space for sharing perspectives and memories, the social aspect means that Rizzotto has to think about toxicity and how it will affect any community that arises on his alien planet.

“All aspects of Where Thoughts Go, from the pace of the experience to the world, the proportions of the creatures, the gestures users employ … everything is there to push you to be a little kinder and more considerate towards others,” said Rizzotto. “However, you can still be toxic if you feel compelled to and your actions still fit the narrative (i.e. this is who you decided to be in this world) — but it’ll be the equivalent of screaming at the void. We block out toxic content through a mix of automated as well as manual systems.”

Rizzotto has experience developing with VR and mixed reality before. He’s worked on hackathon projects, such as Limbpossible Project, the winner in the gaming and entertainment category of the 2017 MIT Media Lab Hackathon. And he developed games for the Microsoft HoloLens like Cyber Snake. Where Thoughts Go is primarily Rizzotto’s solo project, though his friend Tarik Merzouk has been helping with cloud development.

“I don’t like the state of social media today and how it doesn’t concern itself with the mental and long-term emotional well being of people. I also think that most of conflict in the world comes down to lack of mutual understanding,” said Rizzotto. “So I decided to create something that fixed all those problems and gave people a way to be introspective, thoughtful and emotionally connected in VR, allowing them to explore perspectives while also blending my passions of interactive media, music, storytelling in an unique way.”