Kolibree is having a blast “gamifying” the toothbrush. The Paris company has created two connected toothbrushes that train kids how to brush properly. They do so through apps that keep them brushing longer via “gamification,” or using game mechanics to motivate people to do things they wouldn’t ordinarily want to do.

This oral example of the Internet of Things, or making everyday objects smart and connected, was back at the 2016 International CES (the big tech trade show in Las Vegas last week) for a third year. This time, Kolibree showed up with Kolibree Kids, a new smart toothbrush with a game dubbed Rabbids Invasion, based on the cute characters from Ubisoft’s console games.

“If you have the toothbrush in the right place in your mouth, then the Rabbids can win the race,” said Thomas Serval, CEO of Kolibree, in an interview with VentureBeat. “After that, you collect more coins. Your parents get an interesting message in real-time about how you are brushing your teeth.” 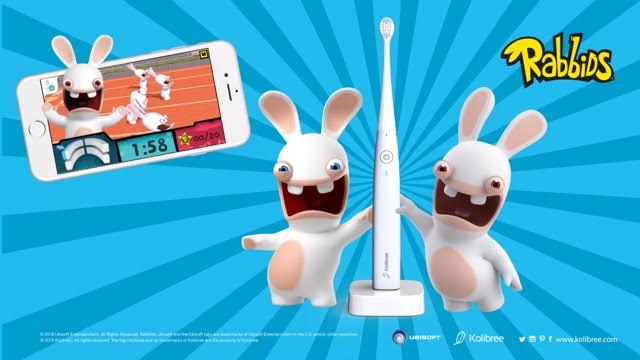 Above: The Raving Rabbids star in Rabbid Invasion on the Kolibree toothbrush app.

Kolibree for Family is already out. Delta Dental, an insurance company, sponsored the first generation. And Kolibree for Family started selling in the fourth quarter of 2015. Kolibree for Kids comes out this spring. A new Rage Against the Zombies game also helps teenagers brush properly with braces. Additional games from Kolibree include La Fontaine’s Fables for kids ages 3 to 6 and Dive Olly Dive for kids ages 6 to 12.

Kolibree doesn’t have the whole smart toothbrush market to itself. We covered Grush: The Gaming Toothbrush for Kids back in April 2015.

The Kolibree toothbrush can use connectivity and 3D motion sensors to figure out where the brush is in your mouth when you are using it. The sonic toothbrush weighs 2.5 ounces. It has three modes of sonic vibration, and the battery lasts for two or three weeks. The Kolibree Family toothbrush is available now on the company’s web site for $149.

While you’re brushing, you can use the mobile app to run the Go Pirate game, an endless runner with a pirate theme. If you have the toothbrush in the right position, your character will run and pick up gold coins. If you miss some areas, you won’t get the coins. The feedback works via Bluetooth in real time.

The new games cover ages 3 through teenage years while the Kolibree Coach app is primarily for adults. The apps are available on both iOS and Android.