When Borderlands: The Pre-Sequel was announced on April 9, Gearbox Software said it was being co-developed by themselves and 2K Australia. That seemed pretty clear. But then stories were written in the press that made things sound a little murkier. 2K Australia was solely in the driver’s seat. 2K Australia was mostly in the driver’s seat, but it was collaborating with Gearbox. So when I interviewed 2K Australia’s general manager, Tony Lawrence, and Gearbox’s franchise director for Borderlands, Matt Armstrong, after a hands-off preview of the game at PAX East, I said I was trying to get a sense of who was responsible for what.

“So are we,” said Armstrong. “It’s actually, it’s working really well, but it’s something complex. And intricate. But it’s really hard for us to answer a question on that. ‘Who’s doing what?’ We’re making it. We’re doing it together.”

Working on someone else’s original intellectual property, like BioShock and XCOM, is nothing new for 2K Australia. This is the first time Gearbox has taken an original IP and put it, even if only partially, in the hands of another studio.

“We’re the stewards. We sort of own the property, so we have to make sure that certain things are fulfilled,” said Armstrong. “As much as possible, we’ve been letting 2K [Australia] take a real strong role in this because we want to do this collaboratively. We didn’t want to just tell them what to do, and we didn’t just want to throw it over the fence and let somebody else do everything by themselves.”

“Matt’s the franchise director, so he knows everything there is to know about Borderlands,” said Lawrence. “So he basically makes sure that we’re stewarded through the development, not stepping out of line, to make sure it’s a Borderlands kind of game. It doesn’t mean we can’t have fun and break a few rules.”

Armstrong told me that the idea of setting part of the game on Pandora’s moon came from 2K Australia. So did the new cryogenic elemental weapon type. Many of the characters and aspects of the gameplay and story are driven by 2K Australia. It sounded like Gearbox Software is in sort of a curator or editorial role while 2K Australia is doing most of the actual production work.

“No, actually. It’s really, genuinely collaborative,” said Armstrong. “We have a lot of people on our side building content and doing things, we have people on their side, the characters are being done in different studios, we’re flying back and forth. We have some of our guys over there for months on end, and we have some of their guys over here.” 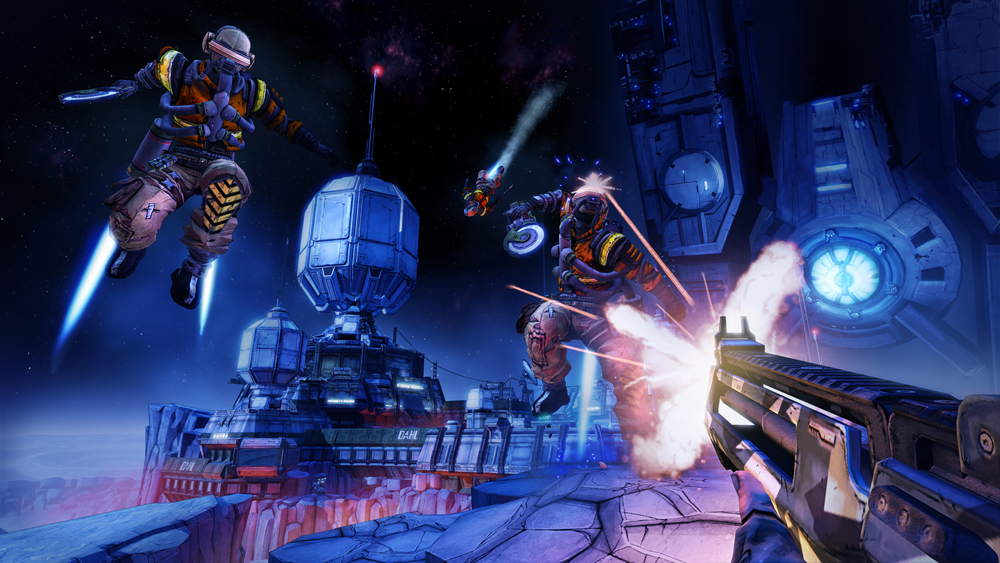 Above: One of these days, Claptrap. Right to the moon.

Gearbox is based in Dallas, Texas. 2K Australia is based in Canberra, the capital city of Australia, located in the southeast corner of the continent. I asked if it was a challenge to have to do that sort of traveling back and forth. Dallas to Canberra isn’t a short hop.

“Longest flight in the world,” said Lawrence. I raised an eyebrow.

“The non-stop from Dallas to Sydney is the longest flight in the entire world,” said Armstrong. Wouldn’t that add a significant amount of time to development, I asked, if they’re shuttling people back and forth on that particular flight?

“It’s key personnel who we really want to have sit down and have conversations, to iterate really quickly,” said Lawrence. “Matt comes to visit us a few times, we’ve got our writers coming to talk to them at the [Gearbox] studios. It’s at that top level we need to discuss things to exchange ideas.”

“Sitting in a room with somebody and collaborating is so much better and so different than getting on a conference call, where we have to show up at 6 at night because it’s 9 in the morning over there,” said Armstrong.

The lines are blurry, and that’s okay

OK, so it sounded like Gearbox wasn’t actually just in an editorial role. It was pulling an equal half of the cart. I asked if team leads were split between the two studios — like maybe the audio department lead was in Canberra while the head of the art department was in Dallas.

Jonathan Pelling, the creative director at 2K Australia, is filling that role on Borderlands: The Pre-Sequel, which suggests primacy of his studio in the development process.

“I like to defer as much as possible to Jonathan over there,” said Armstrong.

“He’s the guy who is putting a lot of the new elements and the gameplay into the sequel,” said Lawrence.

But according to Armstrong and Lawrence, that in and of itself still isn’t enough to draw any concrete lines as to which studio is more or less responsible for Borderlands: The Pre-Sequel. After trying to delineate those lines with a few more questions and getting the same answers, I decided to let it rest.

Ostensibly, we’ll get more details in terms of who was responsible for what when development finishes, but for now it sounds like more of an equal partnership and less like 2K Australia is primarily running the show, as has been reported.

“It’s actually highly cooperative. We’ve really been working together. In many ways, we’ve let them take the lead and sort of push a lot of directions and refine ideas,” said Armstrong.

“It’s not the way that we’re used to, to be working this collaboratively,” said Armstrong. “Now, they are used to it because 2K Australia was a big part of the entire BioShock franchise from the very start to finish. They’ve been doing really good stuff for a long, long time. We’re really lucky to be working with them.”