Assassin’s Creed wants to be a big deal again. The latest entry in the saga, Assassin’s Creed: Origins — which Ubisoft announced earlier today — hopes to do that by rethinking many of the franchise’s core mechanics.

Origins is coming out for PlayStation 4, Xbox One, and PC on October 27. The new entry looks to revitalize the open-world franchise after it took 2016 off (at least in gaming, the Assassin’s Creed movie did come out last year). It’s an important series for Ubisoft, selling more than 100 million games so far. But after over a decade of relying on similar mechanics, Assassin’s Creed is trying to shake a few things up.

We got to talk with Assassin’s Creed: Origins producer Julien Laferriere after playing a demo. He explained the franchise’s new direction, its updated combat, expanded role-playing game mechanics, and why it’s going to Egypt. 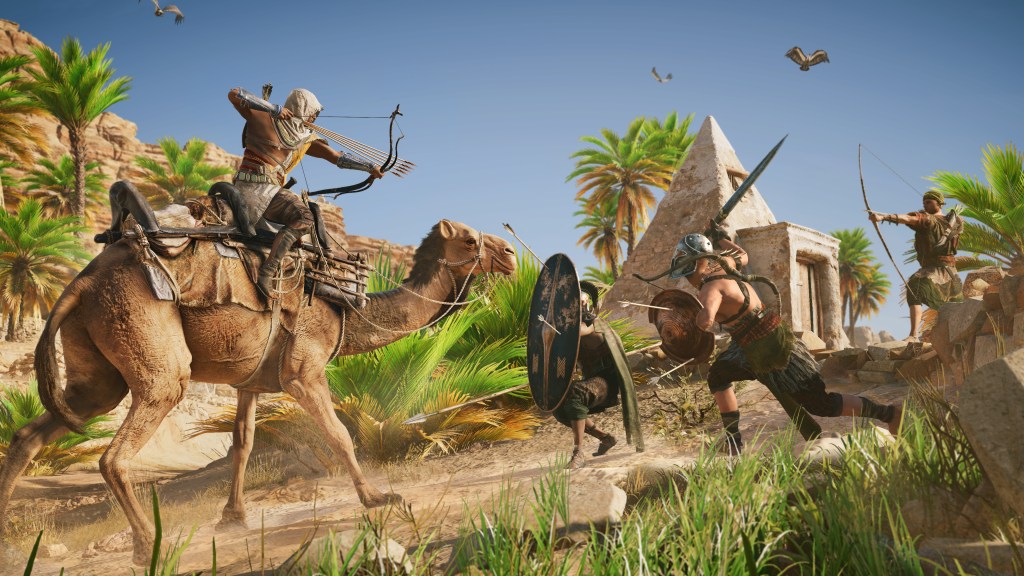 GamesBeat: Egypt was a location people have been speculating about for Assassin’s Creed ever since it became evident that the series would go to many different places. Why finally use that setting this time?

Laferriere: One thing that’s cool about working on this franchise is the fans we have. We love to watch everyone speculate on the forums and talk about where future games might end up. Egypt is a fan favorite, but it’s also something we’ve wanted to do for a long time as well. We wanted to wait for the moment we could do it right.

GamesBeat: Why this particular era? I think the year was 49 BCE.

Laferriere: Right, 49 BCE. What’s fun about starting at this point is we have 3,000 years of Egyptian history behind us already. All the major landmarks are there. We wanted to touch on the dichotomy between an ancient tradition and a new world order. It’s a pivotal moment in history, fitting around Cleopatra’s ascension to the throne. We felt like it was an interesting point in time. We could tell the story of an old civilization witnessing a major historical change. It was a good time for storytelling.

GamesBeat: Assassin’s Creed has always blended real historical figures into its story. Are we going to see figures like Cleopatra and Julius Caesar play roles?

Laferriere: Cleopatra is in the game, as are other major figures. You’ll have to wait until later in the campaign to see more of them announced. Likewise, any connection to the present-day story of Assassin’s Creed will be communicated later on.

GamesBeat: The first thing that struck me playing the demo was how different the combat felt. For a long time, Assassin’s Creed was very counter based. Why revamp it now?

Laferriere: I’m happy you noticed that. There’s a lot of work behind it. We rewrote the system from the ground up. The key to that — it was a governing theme to the design of the game. We wanted to give as much freedom as we could to players. The combat system is part of that. First of all, there’s a seamless transition between melee and ranged combat. If you’re more of an archery kind of player, we support that as well. But in melee combat, we have more than 150 weapons in the game. Their speed, size, and length all affect the way you play. Not to get too technical, but it’s a hitbox system. Your choice of weapon impacts how you interact with the NPCs (non-player characters). We also reworked the NPC AI, so they’ll attack you all at once. I don’t know if you played in the arena, but that’s a very good example of how the combat system evolved. 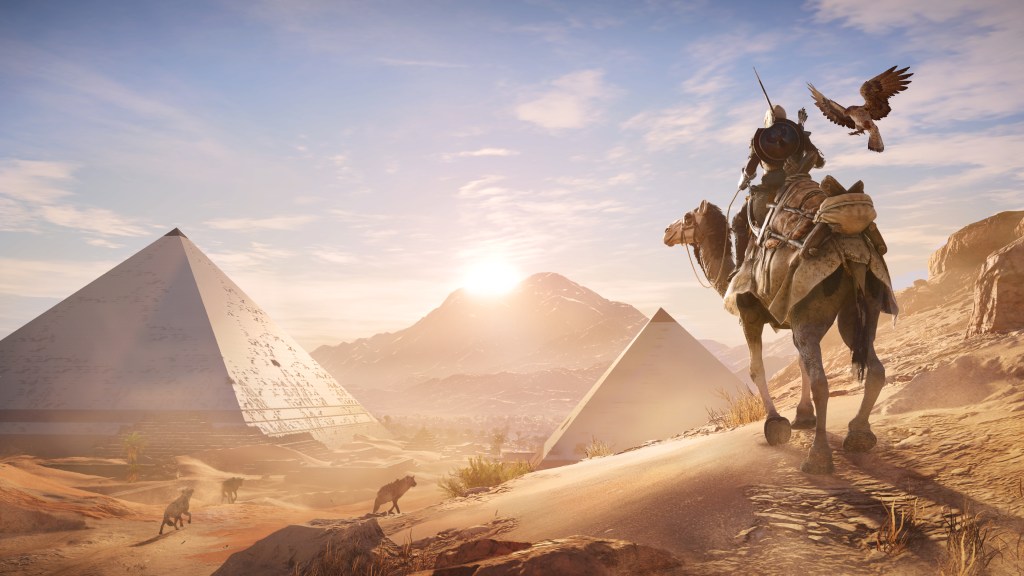 GamesBeat: In past games, enemies would seem to wait their turn for you to kill them. The AI seems smarter now.

Laferriere: We wanted to reward players with the learning curve. Once you master the combat system, it feels really good. It keeps improving as you pick up better weapons and different types of weapons. We wanted to cater to that kind of gameplay.

GamesBeat: The new game also has more RPG elements. Your character levels up. You have a skill tree. It almost reminded me of Far Cry. Why bring those sorts of systems to Assassin’s Creed?

Laferriere: We’ve had RPG elements here and there ever since Brotherhood. But we really made the full switch to more of an action-RPG game here. It goes back to what I was telling you about player freedom. It’s a way to create an Assassin’s Creed experience for the play style that you want. The RPG elements suit that pretty well. If you’re more of a stealth-oriented player, you can develop the part of the skill tree with abilities related to stealth.

You might want to craft and upgrade your hidden blade to kill your enemies more quietly. If you’re more of a warrior type, we have weapons with different rarity levels. You can upgrade those parts of the tree as well. It’s really about freedom. That’s the key to this design direction.

GamesBeat: Are you talking about multiplayer plans right now?

Laferriere: We have connected features in the game, but again, we’ll talk about that later on.

GamesBeat: I was playing the game on a Scorpio [now the Xbox One X]. I was wondering if you could talk about the advantages you get from that version of the Xbox One?

Laferriere: We always like to have new toys to play with. A new platform is always super exciting. Scorpio enables us to render the game in 4K on capable screens. We have a dynamic resolution system. We’re enabling the full power of the different platforms we’re working on. Scorpio is super cool to develop for. It’s a platform that we already know well. We’re happy to be developing in the Microsoft environment. 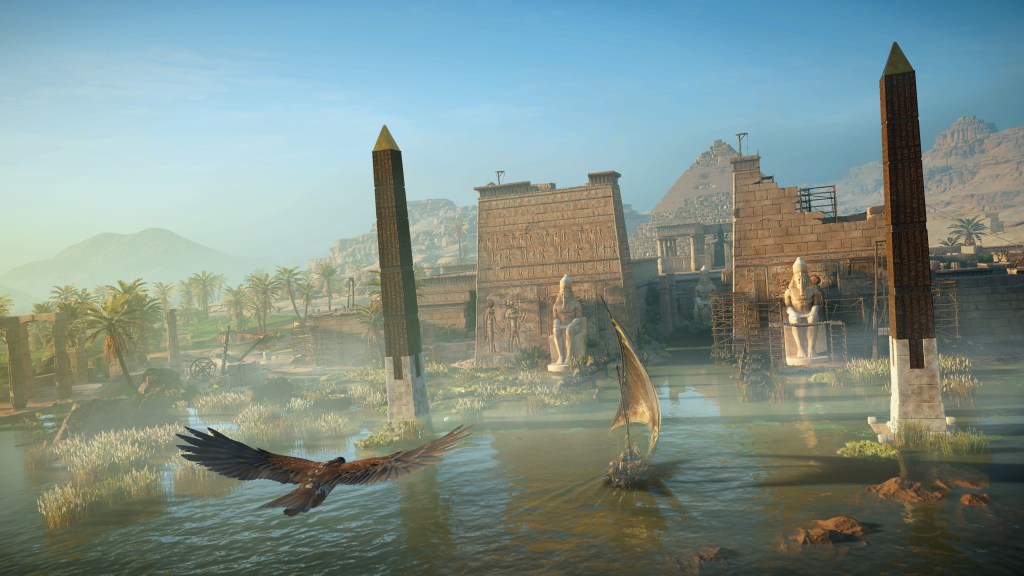 GamesBeat: One of the abilities that stood out to me was the way you can use your eagle to tag enemies. It was really cool, but I wonder if that could make the game a little too easy. You don’t have to scale buildings to scope things out anymore.

Laferriere: The reason why we have the eagle in the game — first of all, we’re telling an origin story. Having the eagle, relating that to the birth of the eagle vision, that’s all very interesting. But also, because the world is so big, having the eagle gives you a top-down view. With the NPCs we have, all with their own agenda — I don’t know if you saw in the demo, but if you target an NPC with your eagle, it’ll tell you what that NPC is doing. It’s another way of planning your attack or just exploring the world. “Oh, that farmer’s going home for dinner with his family.” The eagle offers a fresh perspective.

As a gameplay element, one thing that’s cool is it’s linked with all the reachable high points in the game. When you reach the high points yourself, it’ll improve the way the eagle can locate your targets. So, when you reach the mid-game, you might have a mid-level eagle. The way you can tag enemies is interesting, but it’s also worth mentioning that you can achieve the same result by aiming with your bow. Your objectives are also revealed if you get closer to your targets. Hopefully, players will use the eagle and love the eagle, but there are different ways of getting the result you want.

GamesBeat: One thing that impressed me was the water and how that looked, especially the way the ship breaks through the water.

Laferriere: You have a good eye. We’re super happy to be collaborating with Ubisoft Singapore on that one. The water, like you said, is beautiful. We have full physics with the waves and the way your boat rides them. The sunsets and the reflections on the water are amazing. Also, you can dive underwater in any body of water in the game. There are treasures and loot to discover that way. It adds another layer of gameplay and exploration.

GamesBeat: What’s the scale of the water aspect of the game like? I’m not expecting something like Assassin’s Creed IV: Black Flag that takes place out on the ocean, but how much of the game world is covered by water?

Laferriere: Water plays an important role in the game. It’s an alternate way of navigating. There are rivers and lakes. It plays a big part. But the deserts and forested areas also play a big role. We have some naval combat in the game that we’ll be talking about later in the campaign.