The cyberpunk style of Deus Ex is coming back with the upcoming August 23 release of Deus Ex: Mankind Divided. The title coming from Square Enix is the sequel to Deus Ex: Human Revolution, which came out in 2011. It continues the story of Adam Jensen, a cybernetic human, about a time in the near future when humanity is torn apart by a war over mechanically augmenting human beings.

Human Revolution was set in the year 2027, while Mankind Divided is set in 2029, two years after the “Aug Incident” in which mechanically augmented humans lost control and attacked humans. We talked with the executive game director, Jean-Francois Dugas of Square Enix’s Eidos Montreal, about what he wanted to accomplish with the new game. One of the answers is more action, less stealth, and that’s what we’re going to get when the action role-playing game debuts on the consoles and the PC.

I played a level of Mankind Divided and then sat down with Dugas to talk about the experience. In the level, you learn how to maneuver quietly past guards, open doors by hacking them, and take down guards silently. But the level also has an unavoidable action scene where you have to go in with weapons blazing.

Above: How’s that for action? Deux Ex: Mankind Divided

GamesBeat: On a very elementary level, what did you want to achieve with this new game, after Human Revolution?

Jean-Francois Dugas: With Mankind Divided, we wanted to perfect Human Revolution. Even though it was a good game, I never thought it was perfect. We wanted to balance the experience a bit more, bring a more visceral component to the experience. When you look at Human Revolution, stealth was here and combat was there. They weren’t on the same level.

GamesBeat: You felt like stealth was better than action?

Dugas: Right. When you were stealthy, there were plenty of tools. The way you could eavesdrop on people was a very strong fantasy. When you went into combat, it’s not as if it wasn’t fun, but it wasn’t on the same level. It lacked something visceral, an intensity to the experience. We wanted to emphasize that and make sure combat would be visceral and powerful.

We redid the controls. They’re not the same as Human Revolution. Augmentations work with the D-pad and the shoulder buttons. It’s more fast-paced. In the end it’s still the same balance of whether you want to play stealthy or you want to go and fight. That’s still your call. But now, when you fight, it’s much more rewarding and interesting than it was before. It’s up on the same level as stealth.

GamesBeat: I suppose you’re still not quite doing a Call of Duty style of shooter. How would you describe the action?

Dugas: The combat in Mankind Divided is still tactical combat. If you just go out in the open and try to be a smartass, you’ll learn some lessons before you reload your saved game. Our shooting experience is very different. We wanted to give the players more tools — gun arms with different powers, different types of weapons, more weapons for non-lethal combat. In the last game, when you wanted to be non-lethal, it was often related to the stealth approach. We wanted to bring that into the core combat as well.

We have more augmented enemies as well. They use cloaking and shielding. They can dash from one spot to another. Stuff like that makes combat much more fast-paced. Putting yourself in the middle room won’t keep you safe, unless you use augmentations like the titan shield, which almost transforms you into a tank. Then you can wade into the middle of the action. 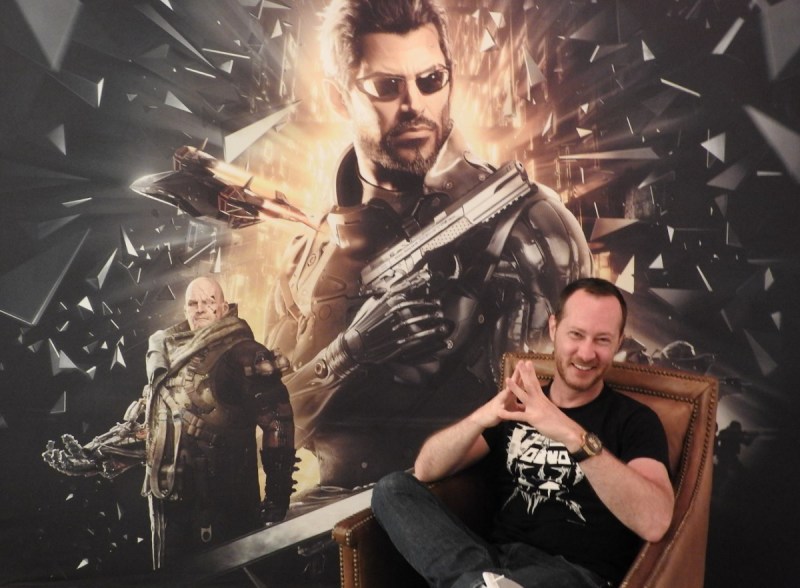 GamesBeat: So you can make combat more survivable in a large group.

Dugas: With augmentations like that, yes. But it consumes energy. You have to be cautious. You might have your titan shield on in the middle of the room and then, oops, you’re out of energy. Then you’re in trouble, and you’ll have to run for cover.

GamesBeat: I’ve played some of the Dubai demo. What are you showing in these levels that you haven’t revealed until today?

Dugas: The Dubai demo is what we showed for hands-on last fall. The real novelty is the Golem map. We showed it hands-off last year, but now you can explore that chunk of the level how you want. You can see the verticality we’re implementing, all the different options. You can use all your augmentations to fight the enemies. You can get a good feel about what we’ve been saying up until now, experiencing it yourself.

GamesBeat: You’ve had a healthy amount of time to work on this.

GamesBeat: How have you used that extra time?

Dugas: Well, there are two components to that. We had the six-month extension that we announced recently, and then the rest of development. Deus Ex runs on the Dawn engine, a new engine that was built fresh for this. Like any technology switch, it never takes just as long as you thought it would take. So that’s one part.

As for the last six months, we could have released the game before, but it was very rough around the edges. We didn’t want to put a game out there that needed more massaging. We wanted to make sure that when it ships in August, it’ll be as good as it can be.

GamesBeat: The video looked very interesting, the live-action trailer. It creates a lot more emotional reaction. What was some of the thinking behind putting that together?

Dugas: Like you said, the emotional impact of what we do is important. That’s what drives us. You can have a game with cool mechanics, but something like Deus Ex that’s so story-driven, that’s about the characters and the context of the world. For us, the live-action trailer was a way to represent what we’re doing that can speak to everyone. Not just gamers who are looking to understand the mechanics. It’s about a fantasy that anyone can be sucked into. It can drive you into wanting to play the game.

We wanted to go for something a bit more mass-market, to talk on a level that everyone understands. That’s the theme of the game, in a way. It’s the emotional connection that we’re trying to achieve. This trailer is the best way to represent that from a perspective that can talk to anyone.

Above: Adam Jensen is still a master of infiltration in Deus Ex: Mankind Divided.

GamesBeat: The bionic arm that you actually created, how did that come about? How did you feel about making some of those ideas real?

Dugas: The Open Bionics deal was more the work of my friends behind the marketing and branding of the franchise. But we worked closely on how this arm would be developed and how it would be faithful to the scenario and the aesthetics of Deus Ex in general.

We’ve been working on this franchise for a long time. We’ve been doing a lot of research — books, documentaries — and teaching ourselves about evolving technology. When we started in 2007, we were thinking about these mechanical arms in a certain way and wondering when this technology might become reality. Since the first game was in 2027, we were like, “I can’t wait until 2027 comes around and we can see how far off we were.” But now we’re only in 2016. Seeing Open Bionics come up with these prosthetics that are functional and look exactly like Adam’s arm — it’s weird.

GamesBeat: Weird in an exciting way, or a scary way?

Dugas: Both! It’s really exciting because it shows that our intuition was good. At the same time, our intuition was really bad, because we’re more than 10 years before Human Revolution and it’s already happening. If people are going to be walking around with these kinds of prosthetics tomorrow—once we master this level of augmentation, eventually they’re going to do even more crazy things. It’s weird and scary, but it’s exciting at the same time. This is where humanity’s going.

GamesBeat: How big a part of the game is this dilemma, in the levels and the gameplay?

Dugas: We have four gameplay pillars. We have hacking, stealth, social, and combat. And exploration is what we call our fifth hidden pillar. It’s hard to balance themes in building the levels. It’s not as if we have the combat level, then the stealth level, then the social level. It’s all happening at once, all the time. It’s a big job for the designers building our maps.

We know the philosophies. We know how to do this. But we always struggle. We have to have a first pitch, a first pass of the level, and then we iterate. Maybe the stealth path is too obvious. Maybe we should put the combat approach up front and hide the stealth to one side. Maybe the level doesn’t have enough social. It’s all about playing, iterating, and feeling out the maps with different augmentations. 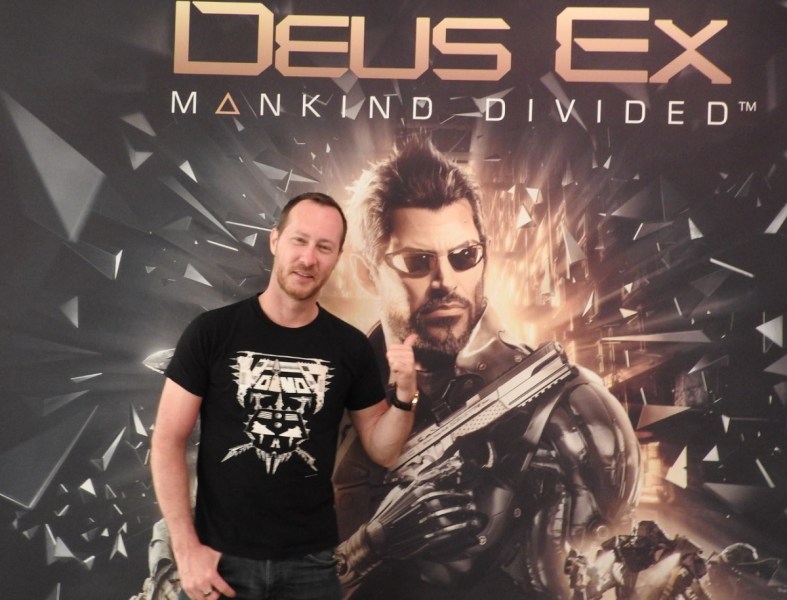 GamesBeat: Is that a challenge for the player, too? Figuring out which augmentations make the level easier.

Dugas: Absolutely. In the end, when you have a lot of ingredients like we have in our game, we guarantee a certain level of difficulty in the sense that we’ll have challenges A, B, and C that everyone will have to go through. But some players are going to go with different augmentations, find different tools, or explore the environment to discover something that’s very advantageous. It’s not necessarily in your face. You have to work for it.

We can’t control the difficulty 100 percent. If you’re a very clever type — connecting the dots, combining this with that — you can go through a challenge and feel like it was too easy. But another player next to you can go through the same thing and feel like it was really tough. It’s part of the magic of Deus Ex. It’s about figuring out your own way through the levels and the world.

GamesBeat: The environment around augmentation now is pretty interesting. Call of Duty has gone there too. It seems like everyone’s competing to do your story the best. Does that put some pressure on you?

Dugas: I can’t comment on that too much. At the same time, though, it’s where the world is going. Deus Ex is all about anticipation, trying to be a window on the future. What’s going to happen to us tomorrow? I can understand why other people are interested in that same subject and want to explore the same themes from different angles. In the end I think it’s cool. They’ll get ideas from what we do. We’ll get ideas from what they do. It’s all good.