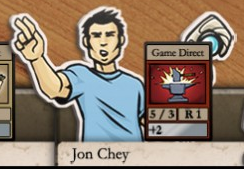 Chey: In the recent past, I’d say Plants vs. Zombies and Ultima are both good examples. In both cases [publisher Electronic Arts] took a franchise that wasn’t free-to-play and turned it into one. Those are interesting cases, though, because I think the results are very different in each.

Above: Plants vs. Zombies 2

GamesBeat: Do you think EA did a good job with those conversions or no?

Chey: I haven’t played a lot of the new Ultima, but I think PVZ2 is a very commendable effort to turn a pay-upfront game into a free-to-play title. I personally would have preferred if it had been left in the original format, but given a mandate to make the conversion, I can’t imagine doing a better job.

GamesBeat: Pretend for a moment that you aren’t making games for a living. Would you agree or empathize with this backlash? Or would you see yourself embracing free-to-play?

Chey: Oh, I do agree [with the backlash]. There are very few free-to-play games that I like, and in general, I am highly suspicious of them.

On the other hand, I’ve played a bunch of them that I like and want to support. For example, World of Tanks is a great game that I’ve poured hundreds of hours into. Compare that to Team Fortress 2, which was my go-to online shooter before WOT. I always felt vaguely guilty that I’d paid once for TF2 and then played it for months after that. With WOT, I’m quite happy to keep chipping in a bit of money here and there because the game is fundamentally good, they provide a continuous online service that I know costs money to run, and they keep expanding and adding to the game. It’s good value for me and makes sense for them as a business.

GamesBeat: What steps have you taken for Card Hunter to assuage any fears or concerns?

Chey: OK, No. 1 is that we started by designing what we thought would be a great game. We didn’t start with a monetization model, as many advised me to, and then build a game around that. Our goal was to create value and then figure out how to get compensated for that.

No. 2 is that we envisage people who want to pay playing the game a lot. We don’t see it is a dead-end grind — we envisage adding more content and keeping the game alive for those who like it.

No. 3 is that we know the core single-player campaign, which is entirely free and is balanced so that you can get through it without paying and without tedious grinding, because we and plenty of our beta testers have played through it that way.

No. 4 is that we’ve just added a single-purchase option to the game, the “Basic Edition,” that unlocks all the remaining single-player content — all of which are optional side-quests — as well as adding a bunch of cosmetic figures, a subscription to the Card Hunter “Club,” and a bit of in-game currency for $25. It’s effectively buying the single-player game if you want more than is available for free.

Finally, I should say that we went to great lengths to ensure that the multiplayer game isn’t pay-to-win, either. Many, perhaps even most, of our top-ranked players in the beta have never paid a cent for the game.