Harebrained Schemes has teamed up with Bandai Namco Entertainment America to publish dungeon-crawler Necropolis this summer. It’s a minimalist game with a breezy tone, but it is astonishingly difficult to play because it has permadeath. If you die, you start over.

We talked about this with Mitch Gitelman, the president of Seattle-based Harebrained Schemes, after a play session with the console version. Gitelman admitted that it isn’t so nice to be so cruel to gamers by tossing them into impossible situations in a game with permadeath. On the other hand, he said that players who are trying the game keep coming back because they want to make it a little bit further. It’s a notion popularized by Dark Souls, a maddeningly difficult series where you only get one life. It’s got an endless maze, like the old dungeon-crawler Rogue from 1980.

Necropolis has a lot of mockery in its narrative, where it notes how many have come before you on a certain path — and have died. Yes, you’re going to die a lot. But the dungeons are procedural, meaning they are different every time. Every time you do a new run, it’s going to be different. The more you learn, the further you can make it into the game the next time. If you keep coming back, then the makers of Necropolis will have a hit.

Bandai Namco is publishing the title on the PlayStation 4 and Xbox One while Harebrained Schemes is self-publishing on Steam on the PC. Here’s an edited transcript of our interview. 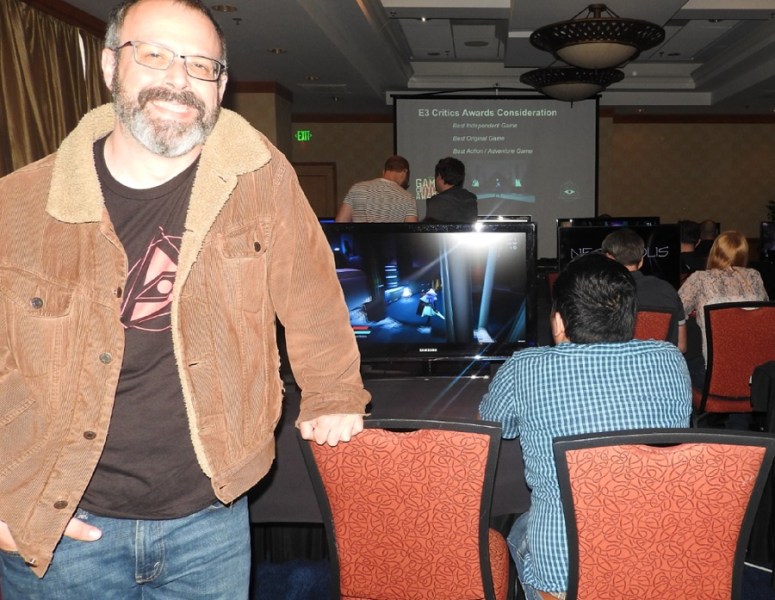 Above: Mitch Gitelman, the president of Harebrained Schemes.

GamesBeat: So you got someone up to level three already.

Mitch Gitelman: In this amount of time, that someone was adroit enough to get there was pretty impressive. There’s a learning curve on this game, no question about it. We planned for it, the right level of frustration. I’ve personally only gotten to level 6, but I started at a deficit because I just suck in general.

GamesBeat: How many levels are there?

Gitelman: At last count, nine. It’s a pyramid, so they get progressively larger.

GamesBeat: You guys pushed the date back a little. What was the reason for that? Did you need to tune the console version?

Gitelman: No, not at all. We developed the game on PC first. Then, when we got together with Bandai Namco and they said they’d like to publish it on console, we decided to simultaneously ship them. So we held everything back to do that.

Meanwhile, what’s great is—yeah, we’re doing console stuff for consoles, the technical certification and all that. It’s a huge chunk of work, so meanwhile we can work on the PC at the same time. Everybody wins.

GamesBeat: This guy is fairly far into the dungeon here, but he’s still level one.

Gitelman: There’s an elevator that always looks the same on every level, so you know you’re at that elevator.

GamesBeat: So when you reach it, then you go down to the next level.

Gitelman: Exactly. There are also secret areas that let you go up and down. It’s very Gary Gygax. Although eventually there are things like—I can’t remember the name of the codex, the magical books you can get. But there’s a feather fall spell. You can jump from one level of the necropolis to the other.

You’re in the interior now, but there are exteriors, too. It turns out that it’s not just a pyramid. It’s this pocket dimension, and there are exteriors inside it. You can jump from one level to the other, but you have to watch it, because each level has progressively harder monsters. If you don’t have the right equipment to take them on, you’ll have a hard time. But that’s your problem. It’s a roguelike.

GamesBeat: The samurai enemies have these little lightning swords.

GamesBeat: A lot of it feels like the timing of your attacks matters.

GamesBeat: Making sure you eat enough, keeping up your stamina, buying enough food.

Gitelman: That’s a big thing too. There’s crafting in the game, so you can craft your own food. You can craft potions. That works out for you. It’s a very straightforward game, but it has a lot of depth and nuance to it, too. For example, we never show you stats in the game. Over time you just start intuiting what’s better or worse based on your gameplay experience. 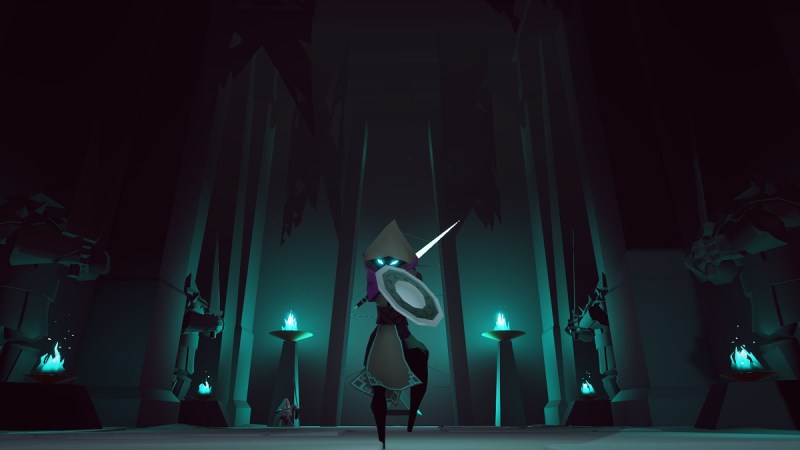 Above: Necropolis gives you one life.

GamesBeat: What’s the secret to making people keep playing, even though they die a lot?

Gitelman: One thing I’ve noticed here is that when people die, as long as they feel like it was their fault and not the game’s fault, they tend to go back in. Also, it’s a matter of—you do these little mini-quests for the brazen heads and you get these little tokens of favor to use for persistent stuff. It’s this little circle that goes down. Get stuff, buy stuff, find cool stuff, learn new things. There’s a lot to learn in this game. As long as people see new content and learn and die in different ways, they don’t mind. If they die the same way every time and they feel like that’s not their fault, then you’re screwed.

GamesBeat: There was some loot on top of a black thing, and we got killed by stepping on top of it. Is that–

Gitelman: Oh, the swords? Were you by a statue?

GamesBeat: Spikes came up around us. We felt like that was a bit of a dirty trick.

Gitelman: The trick with that one is that the traps are also procedurally generated. It found a decent surface to put itself there, I think. We’re dicks. I’m sorry. It’s what it is.

GamesBeat: I see some people go and try to explore every single part of a level.

Gitelman: Yeah, a lot of people do. 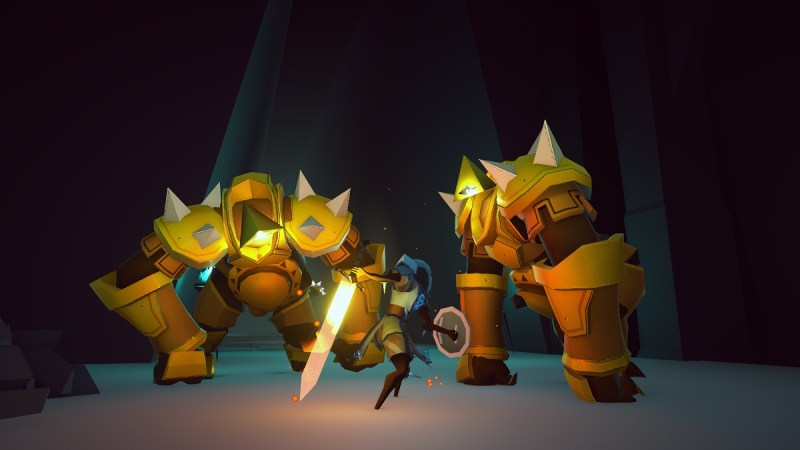 Above: Necropolis is a procedural game.

GamesBeat: Is that the best way to progress? Or is going down into the levels as fast as you can the way to go?

Gitelman: The balancing act goes like this. Again, each level of the dungeon has a different level of monsters. It’s very Gary Gygax D&D. Do you have the right equipment to go down? If you feel confident enough to go down, go down. Speedrun the thing.

Exploring every nook and cranny, all that’s doing is making sure you have as many gems as possible so you can buy stuff. It gives you more options when it comes to buying things, or more opportunities to find something like a scroll that could benefit you. Like the identify scroll. Everything in your backpack—it says, “Potion of something or another, I don’t know.” The identify scroll, if you find one or buy one, it tells you what everything in your backpack is, so you don’t take as many risks. That happened recently. Someone – a reviewer, actually – was playing the game, and he had his back against the wall. He just read this scroll to see what happened, and of course, it was a paralyze scroll. He went out.

GamesBeat: Will you be showing the whole game at E3?

Gitelman: This is the whole game right here. If you were adventurer enough to keep going, you’d see the whole thing. We have no compunction about letting people try that. At the game shows we put a timer on it so we can cycle people through, but we’re not holding anything back.

I’m pretty happy with what we have. I like it when more people get their hands on it. Luckily it’s validating. Sometimes it’s like getting kicked in the nuts over and over again, watching people play your game. But sometimes it’s like, “Oh, hey, I think this crazy gizmo really works.” It’s nice to see that. At E3 we’ll be allowing co-op play, too. We showed that at PAX, but it’ll be nice to see people playing co-op at E3. 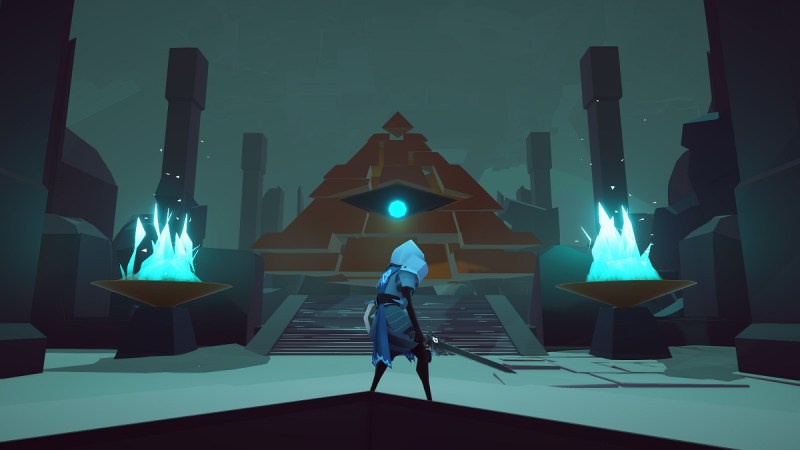 Above: You have to do tasks for rewards in Necropolis.

GamesBeat: Do you expect a lot of competition for records?

Gitelman: We put up a lot of stats at the end. It’ll be up to people to decide what to do with those stats. I expect a whole bunch of streamers will enjoy that. We have our own Twitch channel, too, run by the guy who created Geek and Sundry with Wil Wheaton and Felicia Day. It’s 60 hours a week of programming, so we’ll be streaming it too. That’s a lot of time to fill.

GamesBeat: When you’re playing co-op, does that make it easier or tougher?

Gitelman: We scale it based on the number of players in there. Our Battletech team are the playtesters, actually, because they have some distance from the game. They’re really digging co-op. We took all their feedback, of course. It’s nice having game developers as your playtesters because they don’t just say, “It sucks.” They say, “This here, you should tune it this way.”

GamesBeat: Is it much of an option to just run away from everything? Can you stay alive that way?

Gitelman: Absolutely! Not only that, but like I said, some enemies are natural predators toward other enemies. Running away is not only valid, but it’s really valuable. You can kite one kind of enemy toward another. They’ll fight each other and you can take out the victor who’s already been weakened. That’s a completely valid way to do it.

Running away is also valuable because, depending on which level you’re in and the size of that level, there can be multiple exits from the level. So it’s completely valid. This is a roguelike. Do what you will, you know? There’s no such thing as cheating in this game.

One of those codexes, as an example, the persistent magic tomes you can get, gives you the ability to super jump. You can jump way high up there and the enemies can’t get to you. Then you can craft a bomb up there and start throwing grenades down at them, or drink three or four potions that stack. When you jump down you’re ready to kill all these guys. Once again, it’s all valid. 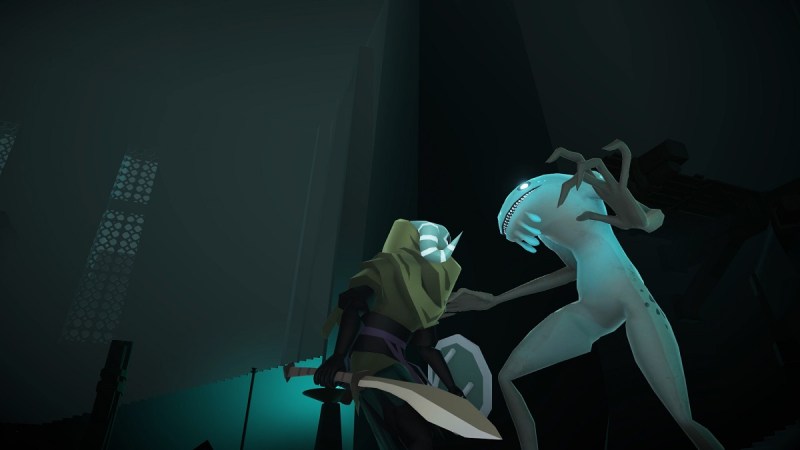 Above: Careful how you swing the sword in Necropolis.