LONDON — The United Kingdom is doing just fine when it comes to its game industry. London and its surrounding areas have long been home to some of the best-known game developers in the world.

But that doesn’t mean that the game industry will thrive on its own without help, according to the creators of a new startup accelerator, Playhubs.

Playhubs was recently started at the sprawling Somerset House in central London by David Gardner, Paul Heydon, Chris Lee, David Lau-Kee, and Nisha Valand. Its nonprofit mission is to help game companies get off the ground and to provide a low-cost co-working space for some of the region’s small but promising game startups.

Peter Molyneux, a longtime game developer and perhaps the most famous British gamemaker (creator of games such as Fable, Black & White, and Godus), said in an interview that England is a “nation of shopkeepers” and the indie game studios are a kind of parallel to that notion.

Lee, an investor and co-founder of companies such as Media Molecule (creator of LittleBigPlanet) and FreeStyle games, told GamesBeat that many of those small companies need mentors, financial advice, and comradeship in their quest to create outstanding games. He views Playhubs’ role as a necessary one for the constant renewal of entrepreneurship in gaming.

Here’s the edited transcript of our conversation. 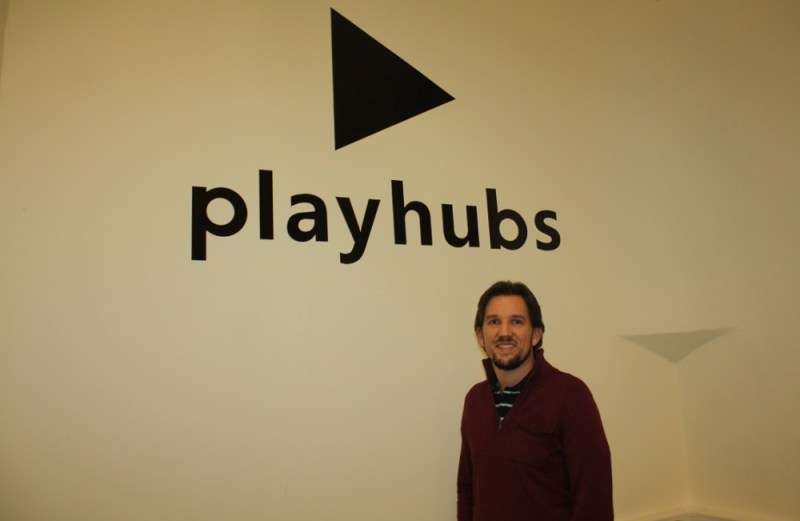 GamesBeat: Can you talk about how the Playhubs game accelerator got started?

Chris Lee: It was an idea that came from myself and the guys behind London Venture Partners – David Gardner, Paul Heydon, and David Lau-Kee. We all reached the same conclusion at the same time. We were all looking for the next big thing, hoping to find investments or studios we could support or be involved in. Although there are some outliers – Space Ape is a fantastic example – we didn’t feel as though there were enough exciting new businesses starting in the U.K.

A lot of it’s down to the fact that it’s more and more complex now to be successful. The U.K. had a great reputation for building original [intellectual property], but it was usually under a work-for-hire model. It was publisher-funded. That would be publishers from the west coast or from Asia. We had a few publishers here back in the day, like Eidos and Codemasters, but predominantly the money was coming from overseas. We were good at building content, but we didn’t necessarily build businesses where we owned the intellectual property and owned the relationship with the consumer.

We started to realize this maybe a year or two ago and thought, “We need to take some positive action.” We needed to build an environment where new entrepreneurs and new startups could come. We could help them fill the gaps in their experience or network or relationships. That’s the principle of Playhubs. It’s a space people can come. It’s not a traditional accelerator, really. We don’t take an equity in the companies. It’s not a traditional incubator where we put people on a program. We expect people to come with an ambition, something they want to achieve, and we’ll help them fill gaps. Maybe there are people they need to meet that they don’t know, or experience they need that they haven’t learned. We’ll mentor them, connect them, and help them hopefully be better prepared to be successful.

GamesBeat: Other countries do some of this. Are you looking at examples in places like Finland or Sweden?

Lee: It’s great. We want to be connected to those. We’re already working, at least informally, with a bunch of those locations. They’re all a testament to how they’ve been able to catalyze those communities. When you look at what’s happening in Finland, it’s fantastic, and the success that’s coming out of Sweden. Stockholm specifically is fantastic.

A lot of that is down to an appetite to fund, an appetite for the government to support. Also — and Finland is a good testament to this — there’s a willingness to share. They believe in this willingness to share information, share experience. David Gardner talks a lot about the idea of a rising tide. If we all share, then hopefully that means there’s a potential for more success for all of us.

There are great examples we can pick from. We’d like to work with them in such a way that some of our candidates or members end up in different parts of the world and can go to different places. We had an event last week, actually, where we had — Ilkka Paananen did a quick welcome to everybody. He said, “Listen, I would love to have Playhubs members come over to Supercell, spend some time with us, learn what we’ve learned.” David Helgason, from a Unity perspective, talked about, “This is what I’ve learned. I’m going to spend some time in Playhubs and help people figure it out.” We just need to try and network across the global community.

GamesBeat: What kind of government involvement is there in Playhubs? Is there some broader government effort beyond this?

Lee: At the moment, there are no specific ties. This is designed as a non-profit. It’s not a commercial enterprise. It’s purely financed by the four of us. We’ll begin to engage on sponsorship opportunities. Because of our networks, we’ve had some great people approach us wanting to be involved. We’ve also started to have conversations with the government. Being located in Somerset House is brilliant because it positions us as wanting to be part of the British cultural scene.

Those conversations will mature. But at the moment, we wanted to build this in the way we thought it needed to be built and then get people involved who believe in the same ideas.

GamesBeat: Over the years, I’ve run into the U.K. trade and investment folks a lot at things like [the Game Developers Conference]. They’ve always seemed pretty active.

Above: Playhubs is at Somerset House in London

GamesBeat: How many projects or companies are you starting with?

Lee: We have space for about 40 people. There’s going to be a mixture. There will be a full-time member, and they’ll have access 24/7. There’s also what we call an associate member. That means they’ll have access about four or five days a month. That could be someone who has a studio in a different part of the U.K. or a different part of Europe, but they spend a lot of time in London. They need somewhere to work, somewhere to be in between meetings, or even somewhere to host meetings. But also they want to network while they’re in London, become connected to interesting people.

We expect the 40 full-time members to break down into about 10 companies or teams. That means they’ve got an idea. They’ve managed to get a group of people together. They might even have some friends and family funding or angel funding, but they’re somewhere between that and being able to demonstrably get a VC engaged in the proposition.

We’d expect someone to be here for between three and six months. We think that’s enough time for them to go out there, network, fill in the missing gaps – whether a resource gap or a knowledge gap – and then hopefully we’ll have helped them, mentored them, matured them to a point where they can leave and be more of a substantive business.

GamesBeat: Is there any funding at the start as well?

Lee: Obviously, I’m looking for investments. We’re actively talking to all of the people who are inside. We don’t have an exclusive right over the funding. There are people like Connect Ventures and Initial Capital and a bunch of angels who are involved and socialize in and around Playhubs. We like to think we can help people source funding more easily than they would have otherwise. But at the moment there isn’t a Playhubs kitty of funding.

It’s something that will be interesting to explore, especially at that very early stage where people maybe only need $30,000 to $50,000, just to really start to put some flesh on an initial idea. That’s difficult money to find. It’s not really a VC point of entry. We might be able to stimulate something from there. There’s a few ideas we’re working on.

GamesBeat: Has anybody done a good job of describing what’s in the U.K. already? Different concentrations of game developers? Peter was mentioning there’s probably 20 in Guildford alone.

Lee: There are some key pockets. There’s Guildford, London. I think of the northwest as quite significant. That’s largely because of Psygnosis. Guildford is largely because of Peter, if you go back to Bullfrog and subsequently Electronic Arts. Everything else splintered from that. Obviously there was Criterion, but that became part of EA. You can always go back to the single mothership. In Warwickshire you can go back to two. One was Codemasters and one was Rare. Then that splintered out into Freestyle Games, Playground Games, Blitz Games. There’s probably 20 or 30 there now.

Brighton is an interesting scene now. That was splintered from what was Black Rock, which was the Disney studio. That created Boss Alien, which created CSR Racing. If you go up a bit further to Scotland, I think Edinburgh and Dundee — that’s from DMA Design, which became Rockstar, but there are splinters out from that. Probably not as many, but Dundee is a really interesting area. I always think of it as pivoting around probably five or six different locations.