Roadhouse Interactive was an ambitious mobile game studio in Vancouver. But like many in the treacherous games business, the Canadian company ran out of cash and shut down.

CEO James Hursthouse confirmed that Roadhouse closed earlier this month and laid off its remaining 120 employees. Earlier in the summer, the company laid off 25 people. It started when one of the company’s biggest clients, a publisher of apps, decided to exit the business altogether, Hursthouse said.

Instead of trying to proceed with a skeleton crew, Roadhouse decided to pull the plug after other efforts failed. He said the company fulfilled its obligations for payroll, and he was happy with that. I spoke with him last week, and here’s an edited transcript of our interview. 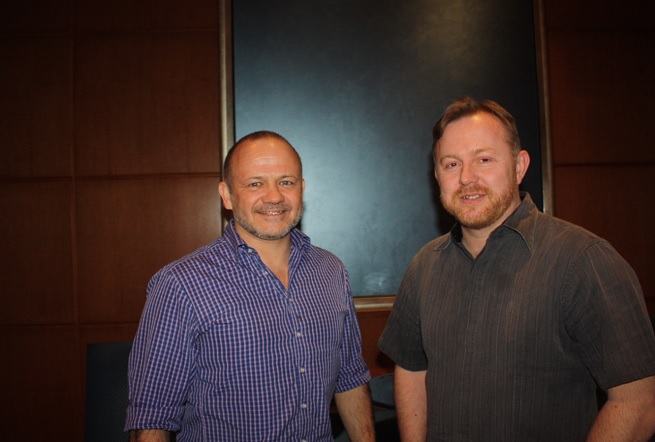 Above: Nick Maliperiman and James Hursthouse (right) of Roadhouse

GamesBeat: Are there any more details you’re able to share about what happened?

James Hursthouse: It’s obviously been quite a difficult summer. The long story short is it was a series of cash flow issues that compounded together. The fundamentals of the business were still pretty strong. We had some great games, and most of the games will continue in one form or another with their publishers or other companies that will take them over. But ultimately, while we still had a great group of people and the business was moving in the right direction, we did have this domino effect of cash flow problems.

In July, one of our key clients decided to get out of the app business altogether. That was the first domino in a series of cash flow issues that led to a significant problem. We still never missed payroll in the history of the company, right up until the end. Everybody was paid up until the day they were let go, which is not so much consolation for some folks, but from my perspective it was important. Now we’re on to figuring out what the next chapter looks like.

GamesBeat: How many people were left at the time you closed?

Hursthouse: We had some layoffs in July, around 25 people at that point in time, which was just a right-sizing exercise. We thought, at that stage, we could still make it through. On September 1, when the business closed, I think there were 125 people affected that day.

GamesBeat: Did you find the environment for raising money pretty tough?

Hursthouse: I don’t know if it was the environment for raising money. Vancouver and British Columbia have a profile as far as the type of money around here. From our perspective it was just this series of events – the cancellation of one project, and then we released the Iron Maiden game in July. We were quite pleased with that. It was monetizing and did pretty well. But in the context of Pokemon Go and an interesting environment over the summer for apps in general, it didn’t do as well as we’d hoped it would. I’m still very confident that game will achieve the success we expected of it, but it wasn’t doing so in a time frame that was going to work for us.

Everything happened very quickly. Obviously the ability to raise money to get over that hump—it was a very short period of time and we weren’t able to do that. We had a few offers for the company, but not within the time frame that was available to us. 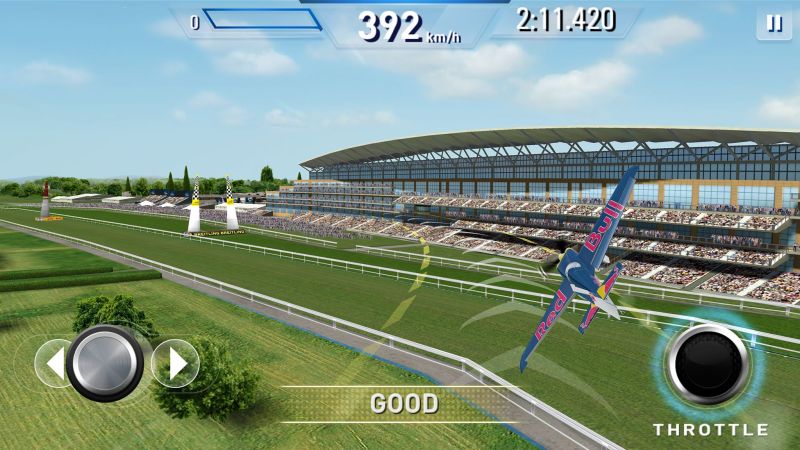 Above: Red Bull Air Race is one of Roadhouse’s previous releases.

GamesBeat: Is there a chance to keep the team together at a new company? What do you see going forward?

Hursthouse: A lot of the games we had are moving forward. In the case of games we built for other companies, those companies have an interest in keeping those games moving. A couple of the teams are still together working on their games for different owners. The Iron Maiden team is continuing to work directly for Nodding Frog, the publisher. The Bingo team is continuing to work together. Obviously it’s only been a couple of weeks, so the dust has only just begun to settle.

It was a great group of people and I know that the inclination is for folks to continue to work together. But Vancouver is going through a bit of a boom right now – not just the games industry, but technology in general. I know that a lot of the guys at Roadhouse will be working for some of the other shops in town and I wish them all well. I don’t see all that much trouble as far as finding another role for these guys. Some of them are continuing to work together and some are going on to new opportunities.

GamesBeat: Do you have a plan for yourself right now?

Hursthouse: I’ll take a few weeks to see what’s around. I love British Columbia. I moved here six years ago and it’s been great. I love Vancouver. I love technology and I love games. It’ll be something in tech and in Vancouver, but I’m not sure what that is yet. I’m still assessing the opportunities.

GamesBeat: What’s your own view of opportunities in the mobile game market versus other things?

Hursthouse: The research we were doing and the market intel we were gathering—I think there’s still room in the mobile games industry. There are some dominant incumbent players, which is certainly part of a late-stage, mature market, but I don’t think people are going to stop using mobile phones or stop wanting to play games on mobile phones. I don’t think that brands and IP holders will want to stop accessing that audience through mobile devices. There’s still an opportunity in mobile, although it’s quite competitive and there are these giant players making it increasingly difficult to stake a claim.

I’m looking at VR and AR, obviously. Mixed reality is the next frontier, whether or not the market itself is ready for that. There’s a lot of activity there. Vancouver is quite well-poised to capitalize on that, given the mix of mobile and console and PC development experience here. Also, as generations of kids grow up having played video games and become employed in all sectors of society—gamification has become a bit of a dirty word, but I do see the influence of game development spreading more broadly across society. There are lots of opportunities. It’ll be interesting to find out what that next chapter is for me. 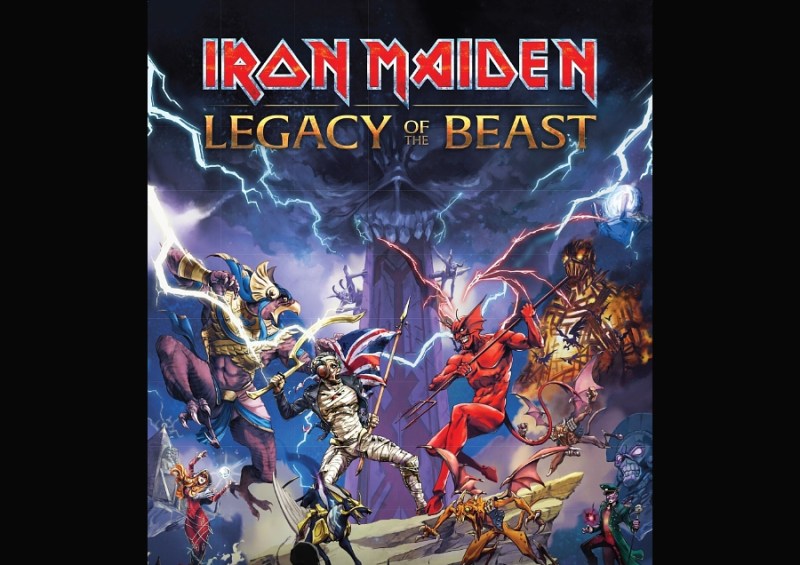 Above: Iron Maiden: Legacy of the Beast

GamesBeat: What’s your view of Canada? Does it seem like a strong player in mobile?

Hursthouse: I think it can be. At Roadhouse we had a great dialogue with the provincial government. In February we visited Ottawa to talk on a federal basis. There’s a renewed interest in technology, especially in B.C. We had B.C. Tech Week. The government’s been talking a lot about its support for the technology sector. Games have a high level of attraction as a gateway to technology careers more broadly for kids. I’ve been quite heavily involved in some programs around that. The government particularly sees games as a cornerstone of tech, an important piece of the jobs strategy moving forward.

There’s a lot of talent here already, a lot of creativity here already. For the development environment, we have the right factors. We could obviously use a bit more seed and series A money that’s willing to invest in content companies, but that’s a challenge wherever you are. Proximity to Asia, single flight to Europe, direct flight away from San Francisco, really good tax rate—it’s a good place to be building anything in creative technology. Not just video games, but animation, VFX, everything more broadly. I’m very much hoping I can figure it how to stay here.

Hursthouse: It was a good six years. We achieved a lot. It was something to see how quickly it can all go away, but at the same time, we did get quite a long way for a number of years. It was fun while it lasted. It’s not the first games company to go out of business and it won’t be the last. You take the risk in order to achieve the reward.

GamesBeat: One thing I wonder, did you consider going down to a skeleton crew and trying to survive that way?

Hursthouse: Without going into too much detail, there were issues that wouldn’t have allowed us to do that. There’s a couple of pieces of employment legislation in British Columbia that make that difficult. We looked at it and we realized that the key value in the company was in the team. That’s been proven out as the teams have moved on to work on these games in different scenarios.

Really, it was the factor of cash flow rather than anything wrong in the fundamentals of business. If we’d cut the team significantly, would we have been able to maximize the value and the success that we all believed existed in, for instance, the Iron Maiden game? There was a factor of being all in. A smaller, skeleton Roadhouse—and as I say, there was the factor of this employment legislation not working in our favor. In the end, we had to take the path we did.