Mixi Inc.’s Monster Strike is a mobile juggernaut in Japan. It frequently ranks among the top-grossing mobile apps on both Android and iOS, boasts over 40 million downloads (in a nation of 127 million people), and it has spawned a devoted fanbase who watch an anime adaptation, go to special Monster Strike-themed live events, and even attend concerts featuring the game’s music.

But despite runaway success in its home country, things haven’t been as rosy for Monster Strike abroad. The mainland Chinese version shut down in 2015, followed by the Korean version last year. While Monster Strike continues to see international success in Taiwan, Mixi has finally decided to pull the plug on the English version (which covers North America and Australia), stating that the game will cease service by August of this year.

Many longtime players were waiting for the other shoe to drop: Things already weren’t looking good when Mixi decided to suspend marketing in North America late last year. But for those who’ve played the game since its English inception in 2014, this marks the tragic end of a great mobile game whose international release was stunningly mishandled. Were it not for a few major mistakes, the game could have been, if not a massive mega-hit, at least a sustainable source of side income for Mixi.

“I think the game is, at its core, really made for a domestic user base (gacha monetization, high frequency of events, art and sound, etc.), so Mixi was facing a huge challenge [in localization] from the get-go,” says Japanese mobile game industry analyst Dr. Serkan Toto.

What did Monster Strike do wrong? Here are some of the mistakes Mixi made, from least to most egregious.

It’s understandable that Monster Strike’s content would lag somewhat behind its parent in Japan — localization takes time and effort to implement, after all, and some things need to be tailored to a different market. But at several points in time, the North American game was many months behind its Japanese counterpart. Players would see news on fansites about all of the cool monsters, events, and interface improvements happening in Japan with no clear timetable of if or when they’d see them in their version of the game. In addition, the Japanese version of the game received several “collaboration” events with other famous media properties that gave players a chance to obtain exclusive monsters and play limited-time dungeons. While some of these collaborations would not have worked well for an audience outside of Japan, like Ultraman and Doraemon, others, like Street Fighter and the megapopular anime Evangelion, would have grabbed some attention from curious players and perhaps also inspired casual players to engage more regularly had they been adapted for the English version.

Monster Strike is one of Japan’s biggest app money makers. “In Japan, it’s known the game focuses a lot on very high-spending users: both the ARPU and ARPPU of Monster Strike are said to be multiple times higher than that of Puzzle & Dragons, for example. This is thanks to the way Mixi designs its title’s “gacha” (random draw system),” notes Toto.

Free-to-play games have to convince players that spending money is a good thing — which is a pretty tough obstacle to overcome sometimes. In Monster Strike, it was especially tough. The game’s premium currency, orbs, are for — among other things — obtaining new and exclusive monsters from the game’s random “hatcher” — the English name for the gacha mechanic. A 50-orb roll from the game’s random monster hatcher cost almost $40 for 10 monsters, and this didn’t guarantee even one of the game’s treasured 5-star monsters. Of course, players could scrimp and save the free orbs that the game hands out to try for new monsters if they didn’t want to spend money — and with rates that low, many Western players felt reluctant to fork over cash. But the 5-star monsters are a huge boon to clearing some of the game’s tougher dungeons, so eager players took every opportunity they could to beat the system and get free rolls without paying a dime.

Early on in the game’s life, the way to do this was through friend invites — invite a friend to the game, and you’d get a code you could redeem for tons of orbs and bonuses. With this, you could make numerous “dummy” accounts using things like Android emulators to acquire orbs for free rolls. Apple eventually forced Mixi to remove this functionality, as it violated its policies.

When the invites were removed, players turned to another means for free orbs: the affinity system. By playing multiplayer games with others on your friends list, you would fill up an affinity gauge, which would give you a daily reward when it maxed out. The rewards in the game’s English version were adjusted from the Japanese version, giving out far more orbs as a reward for playing with people on your friends list. Mixi even gave out free vouchers for a period that would allow players to play a quest and max out affinity (and get rewards) for that day instantly.

While Mixi figured that “one affinity bonus per friend per day” would be good enough to stop exploits, it was wrong. The dummy accounts came back in full force, with people friending, getting affinity, and then defriending numerous players daily to earn piles of free orbs. Groups developed for the sole purpose of farming free orbs with each other: an active circle of 20 players would rake in piles of free orbs each month, which they would hoard to spend when the most powerful new monsters were introduced. Eventually Mixi stopped distributing the instant affinity vouchers, but not before giving out a large amount of free currency to players eager to exploit the system — but without making any further adjustments to affinity rewards, simply making the process harder rather than adjusting it to something better for business. When people are used to getting things for free and suddenly find it more difficult, they’re not necessarily likely to start spending — they’ll either adjust their playing habits or take their freeloading elsewhere. 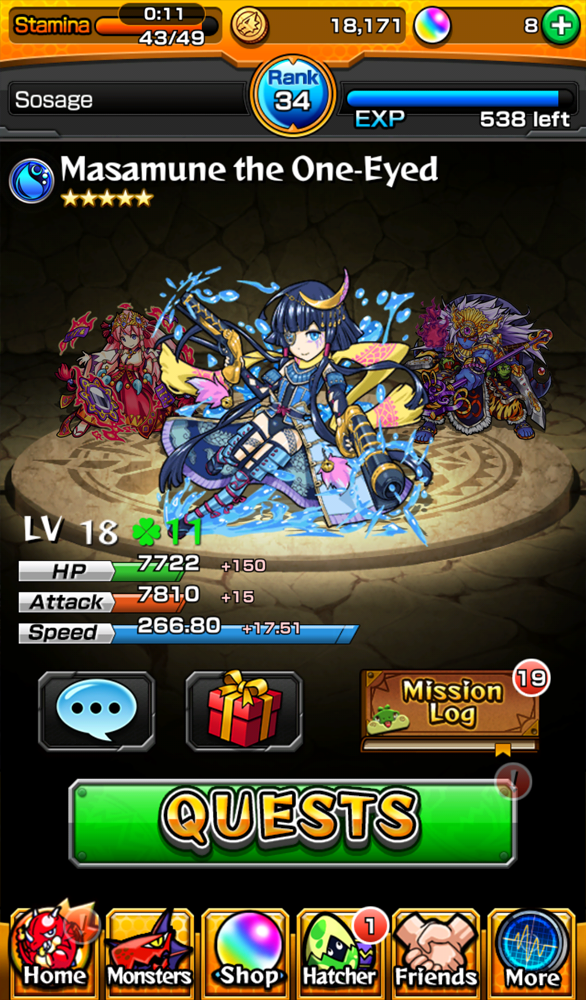 A smart solution — which was partially implemented later in Monster Strike’s life — would have been to eliminate generous affinity rewards and guarantee a 5-star monster for a 50-orb roll and thus provide some guaranteed value to players in exchange for spending. There were a few limited-time offers that included a guaranteed 5-star monster starting from late last year, but unfortunately, this change came too late to make an impact.

Games-as-a-service is a model that thrives on player trust. People are willing to put money into these games because they trust that the game won’t suddenly and radically change overnight into something they no longer enjoy. Mixi learned this the hard way with a decision that, in the eyes of many players, doomed the English version of Monster Strike by alienating its player base and destroying the trust that the company had spent over a year building.

Early in 2016, Mixi trumpeted a partnership with Facebook Creative Labs to help promote Monster Strike in the West. With this deal came a new, localized interface for the English game, a new tagline and logo, even a live-action commercial meant to go viral featuring Andy Samberg (which seems to have completely vanished from the internet as of this writing). But with this marketing push came an announcement that shocked many of the game’s longtime players: Mixi was removing online co-op play.

Monster Strike was, fundamentally, a game that thrived when played with other people.”Forcing people to play a game next to each other is a concept that works well in densely populated areas like Greater Tokyo but fails in regions of the world that are further spread out like the US,” notes Dr. Toto. Early interviews with the localization and promotion team of the English version suggested that they knew how important having online co-op was to this market, and they made sure to implement it in the game as best they could.

However, at some point, Mixi management decided to change course. They wanted — for reasons that may forever remain a mystery — to emphasize the importance of local co-op play to the English market above all else. They started by removing global co-op, a feature that let players look for and join random games, then added additional dungeon clear bonuses that could only be obtained through local co-op play (which many players exploited by making alternate accounts on separate devices). Then, not long after the new marketing blitz, the company announced that support for online co-op would be dropped for the English version with little explanation as to why.

The reaction from players was swift and angry. Mixi never explained why they were dropping the feature (which remained in the original Japanese version of the game), leaving players to theorize why they would do such an absurdly stupid thing. Bad reviews and angry posts began flooding app stores, message boards, and Facebook. New players who might have seen advertisements or promotion would take an interest in the game, only to take note of waves of angry messages decrying removal of a feature players loved. How could anyone look at those reactions and decide they wanted to invest time and money in a game that would betray its own player base?

To this day, we still don’t know why Mixi over thought killing this feature was a good idea. The only thing it accomplished was destroying the trust of their established fanbase — trust no amount of marketing spend could ever hope to bring back. Eventually, online co-op play was restored, but it never recovered — many players had migrated to the Japanese version or simply moved on to different titles, and the small amount of players that either stuck through it or came back to the game weren’t enough to keep the lights on.

Such is how Monster Strike ends: a mobile juggernaut felled by a string of poor decisions. The game’s in no danger of dying off in Japan, but for now, it seems like Mixi’s grand ambitions of global expansion have been struck a severe blow.