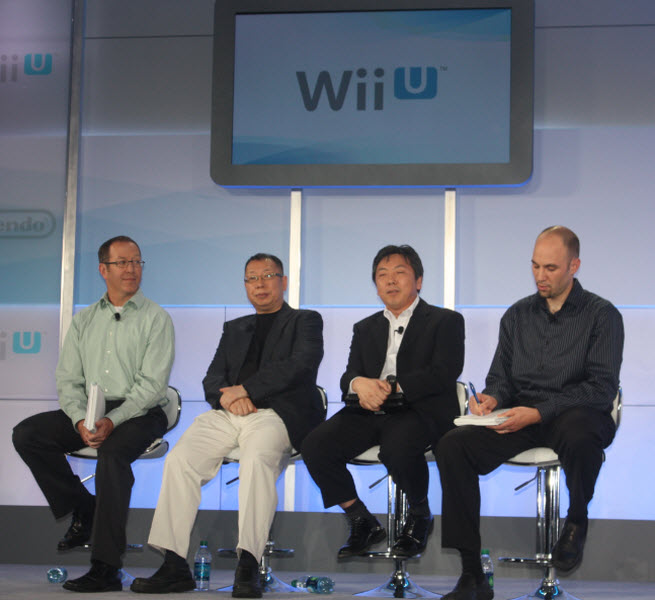 It sounds like a no-brainer that Nintendo should add a second tablet-like gamepad to the new Wii U video game console that it will introduce later this year. But at the Electronic Entertainment Expo (E3) video game trade show, the Japanese company hasn’t shown two gamepads working with a Wii U machine.

Those images are not the same as will be on the big screen. For instance, in the Nintendo Land Animal Crossing game, the player with a gamepad sees two guards who are running around a garden trying to capture little candy-stealing animals. On the big screen, other players see the candy-stealing animals. So the displays are showing different images.

Nintendo of America president and chief operating officer Reggie Fils-Aime confirmed today that the Wii U will support a second gamepad, but Nintendo didn’t show any examples.

Asked about this at an evening event, Katsuya Eguchi (middle right), producer of the Wii U hardware, said that adding a second controller is difficult.

“The reality is it takes processing power to draw an image on a single screen,” he said, speaking through a translator. “If you add a second screen, it requires extra resources from the hardware. There are hurdles we have to overcome. But by implementing another screen, it adds more innovation in gameplay, and it makes it more fun.”

Takashi Tezuka (middle left), a general manager for high-profile Nintendo games, said that adding the different screens could make for a more interesting experience for gamers. That is because you could have traditional games such as Madden NFL Football and have two players play against each other, hiding their plays from each other by setting them on the smaller screens.

But Eguchi reiterated,  “Taking the same image and displaying it on three screens does significantly affect the performance. With three different images on three screens, that is something else. The fun and enjoyment is what you get. What’s most important is how the roles of the screens are divided. To be quite frank, if you try to push too much performance, you need more expensive components, and that raises the price of the hardware. You have to draw a fine line between performance and cost of the hardware and being able to create the experiences that you want to create. That is my frank opinion.”