We are now two decades removed from the start of the Pokémon fad, and I’m starting to think it is more than just a phase.

Back in the late 1990s, it was difficult to understand why Pokémon caught on with so many people around the world. But with the benefit of 20 years of hindsight, we can look back and see that it was popular then for the same reasons it’s still so beloved today. These include its multimedia content strategy, its strong focus on collection, and its paper-rock-scissors battle mechanics. Most important, however, is that Nintendo and The Pokémon Company understand how crucial it is to a developing child to feel like they have a comprehension of complex systems that they can discuss and debate with their friends while their parents look on in bewilderment.

Since debuting in 1996, Pokémon has generated approximately $45 billion in revenue. That’s from the games, the feature-length films, and the merchandise. As we look back on the history of this franchise, let’s dive into why these pocket monsters still matter to millions of people.

Pokémon is the ‘Star Wars’ of video games

When it first debuted, Pokémon was one of the biggest new media launches in decades — especially in the United States. While they were hugely popular games, Red and Blue did not account for the entire Pokémon experience. Instead, Nintendo, Game Freak, and Creatures — the corporate triumvirate that owns The Pokémon Company — entered the market with a massive multimedia strategy that harked back to major toy rollouts of the 1980s and the sci-fi film that turned fandom into a big business: Star Wars.

In 1977, as director George Lucas and Hollywood studio 20th Century Fox were preparing to unleash Star Wars, they agreed to try something new when it came to marketing. Instead of the rote billboards and predictable radio ads, Fox and Lucas poured cash into a marketing assault on all fronts. This included toys, posters, lunchboxes, and more. Not only did this help promote the film, it also generated billions of dollars in revenue for decades.

But more important than the money is the effect that these products had on pop culture. Star Wars was everywhere. It made the property feel not only inescapable, but it put people in a position where they potentially were reminded that they were missing out on something if they were not in on this megatrend. If you can’t buy apparel, breakfast cereal, or even music without seeing Darth Vader, it’s probably something you need to learn about.

A decade after Star Wars, the toy industry flipped this concept on its head to great success. When Mattel, the toy company best known for Barbie, decided it wanted to create a doll that boys would love, it didn’t just throw another piece of plastic on the shelves at Toys ‘R’ Us. Instead, it designed a character called He-Man and gave him a story. When it launched the product line, it did so alongside a Saturday morning cartoon show that kids lost their minds for. He-Man wasn’t just a toy or a 30-minute action adventure, it was a social experience you couldn’t miss out on.

“He-Man was one of the first product lines designed by research,” former Mattel executive Thomas Kalinske told GamesBeat. “We researched the hell out of every aspect of that line. We researched up against Star Wars, DC comics, and everything else that existed at the time.”

That led to $75 million in sales in the earliest days of He-Man, but to get to the next level, Kalinske made deals to get his team’s idea for the He-Man and the Masters of the Universe television program onto channels nationwide.

“After doing the television show, we thought we should do a movie,” said Kalinske. “We did Masters of the Universe with Dolph Lundgren. Now, that wasn’t a big hit, but it was additional exposure.”

He-Man also had a traveling show that would stage events at arenas around the country. This was all part of a strategy to expose every type of kid to Mattel’s product, and that eventually turned the blonde barbarian into a billion-dollar business.

“And I think this is exactly what has occurred with Pokémon,” said Kalinske. “Of course, today, The Pokémon Company has even more opportunities for exposure. They can do a YouTube channel and all kinds of things online.”

For the people in charge of Pokémon, the multimedia-marketing playbook established by He-Man was an obvious way to approach launchubg a property like Pokémon in 1996 and then in the United States in 1997. Only no one else had tried this strategy to this degree before in gaming (even though Kalinske was also involved in the development of Sonic the Hedgehog).

When Pokémon came to the U.S., it was everywhere overnight. It was a cartoon. It was a trading card game. Red and Blue were the biggest must-have Game Boy games. Pikachu, the official mascot character of the franchise, was showing up on every possible of merchandisable surface you can imagine.

The explosive popularity wasn’t magic. Marketing and merchandise worked because the Pokémon designers did the kind of research that helped He-Man catch on. Developer Game Freak decided to make Pikachu the mascot because children have an easier time seeing a primary color like yellow and only Winnie-the-Pooh bear was also yellow at that time. And when it came time to name the electric rat, the developers struggled to find something that would work in both English and Japanese, according to an interview in GamePro magazine.

That smart research combined with the merchandise and marketing and television show to make Pokémon more than just a brand. It was a hip fad that you could not miss out on. If you didn’t understand it, that was a personal failing. For kids, you got it and talked about it constantly with your friends or you were left out of the fun and potentially ostracized.

Of course, Pokémon — like Star Wars or He-Man — would’ve had found an audience regardless of its marketing. But the cross-medium promotion likely propelled the series into the realm of cultural phenomenon.

It understands that kids want to own knowledge

But while the marketing model turned Pokémon into a phenomenon, the game, the television show, and the cards still have a huge audience today because the series understands something about humans. Digging into the world of pocket monsters gives fans the opportunity to learn and specialize in complex databases of knowledge.

Pokémon isn’t just a game about cute animals fighting one another. That gives it a certain amount of initial appeal, but it earns a last attraction by offering up an esoteric rule set that is simultaneously simple enough for kids to understand while cryptic enough to confuse parents. Pokémon is an opportunity for a child to completely absorb themselves in a world of arcane concepts. For many kids, this is one of the first chances they’ll get to feel like a true expert on a subject, and that’s a critical step in growing into an adult. You need to know that you have the capacity to learn something that even your parents cannot grasp. It’s the same thing that makes a game like Magic: The Gathering popular with generation after generation of players.

Nintendo’s designers surface these systems for every kind of player. You can learn how to specialize in catching rare creatures. Or maybe you’ll prefer figuring out the nuances of the breeding system. Or maybe you’ll want to spend all of your time on endgame player-versus-player competitions. 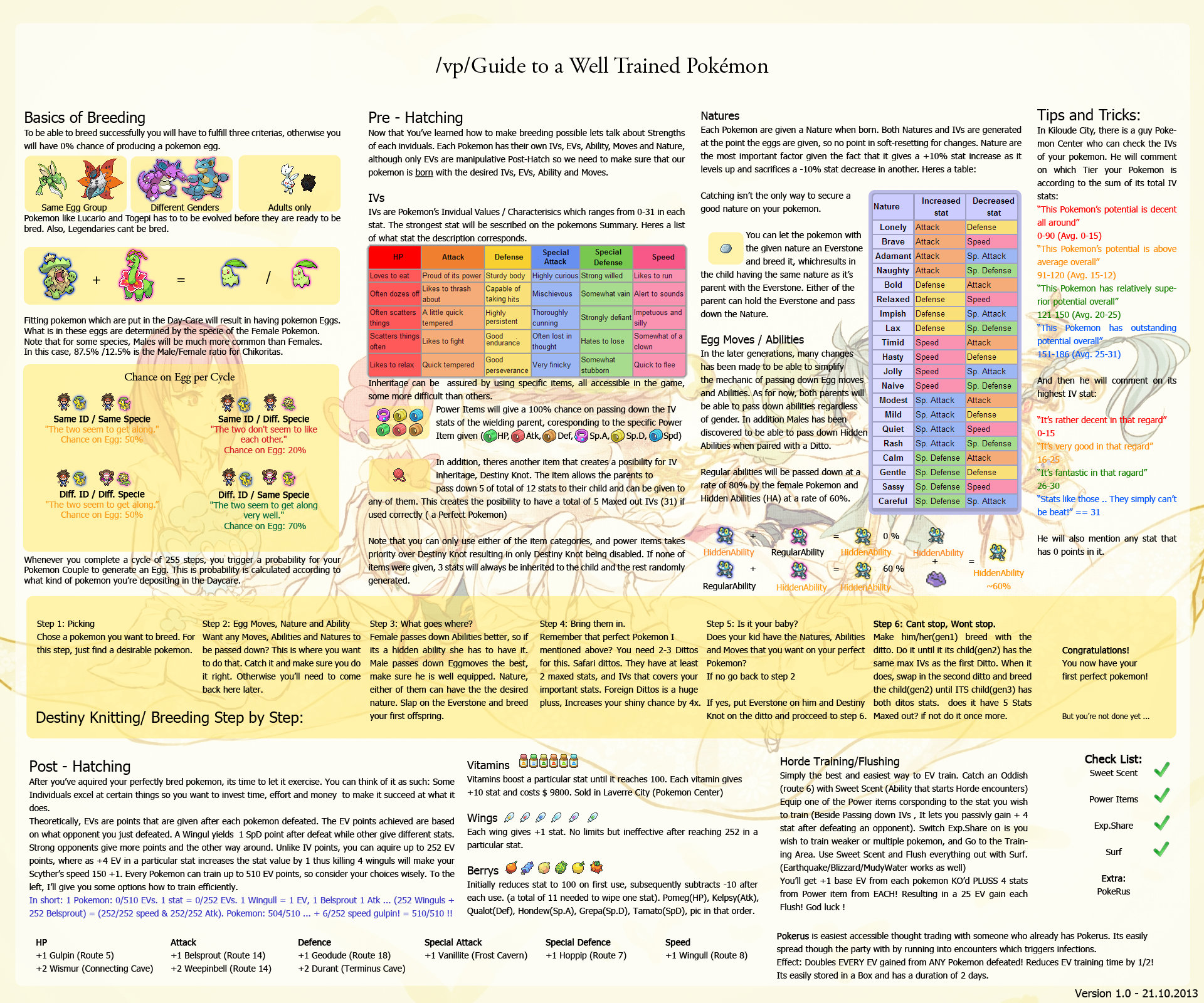 Above: An “easy” guide to breeding Pokémon.

But you don’t need to go so deep. Even learning the different Pokémon types can give you a feeling that you own a piece of understanding, and that’s always valuable.

Finally, impenetrable systems are only appealing if they build on a strong foundation. You want to learn how to breed a shiny creature because the game has made owning and displaying a monster like that valuable.

For the Pokémon games, combat and collecting define the series. And Nintendo hasn’t really changed these aspects for that reason over the past 20 years.

The battles are still menu-based paper-rock-scissors confrontations. You learn immediately in each game that fire beats grass, grass beats water, and water beats fire. It’s an idea that most people will recognize immediately. And that builds a bridge that leads to players feeling like they can go from this rudimentary understanding to having a mastery of the more robust systems.

By the end of even the most casual playthrough of a Pokémon role-playing adventure, every player is going to have a firm grasp of what rock, steel, and ghost types are strong and weak against. And most players will spend some time crafting a team that is capable of coming out victorious in a number of circumstances. Customizing a crew for combat and encountering battle after battle where you know exactly what to do is satisfying in a really fundamental way.

At the same time, nearly all humans feel a need to gather and collate. Pokémon gives you hours of gameplay where you are capturing more and more rare monsters. And as you grab them, you get to check them off a list. It’s a simple idea, but almost no game has ever done it better than the Pokémon franchise.

And, again, this is why Nintendo has changes so little from Red and Blue through X and Y.

Nintendo, Game Freak, and Creatures have developed a timeless formula that will attract humans for generations. It does too many smart things, and the people in charge of the series clearly understand why it has so many fans.

If anything, The Pokémon Company is getting ready to find new ways to capitalize on the brand with upcoming releases like the GPS-powered augmented reality smartphone game Pokémon Go. And with rumors suggesting Nintendo’s upcoming NX system may combine its home console and handheld systems into one unit, we may soon have the first main entry built for your television.

With its history and strong foundation, it seems inevitable that Pokémon will keep its momentum going through 2036 and beyond.