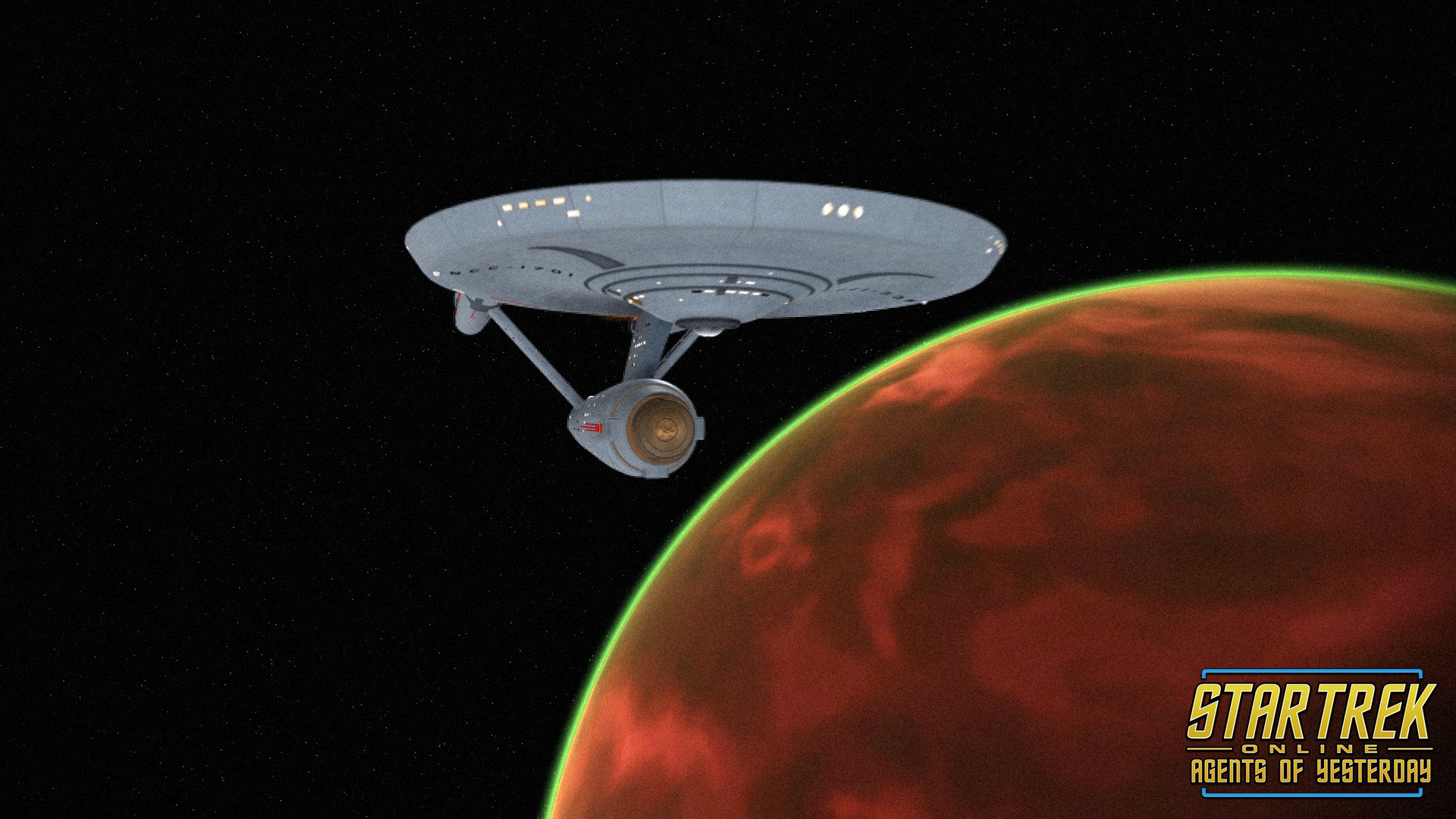 GamesBeat: Is your player base Star Trek fans, or MMO players who found their way into the Star Trek universe?

Ricossa: I’d say most of our players are Star Trek fans. But we do have some that are just big MMO or sci-fi fans.

Ricossa: Callbacks everywhere, all over the place. We have an episode where you’ll go back in time during an episode taking place on the Enterprise. You’ll be trying to stay out of view, the just-off-camera thing. One of our episodes is based on a story that was told on Deep Space Nine by one of the Klingons that was in that Original Series era, talking about this great trap he sprung on the Federation. We built that into an episode. So yeah, you’ll definitely be seeing familiar places, familiar names, familiar enemies. Definitely getting that nostalgia going. 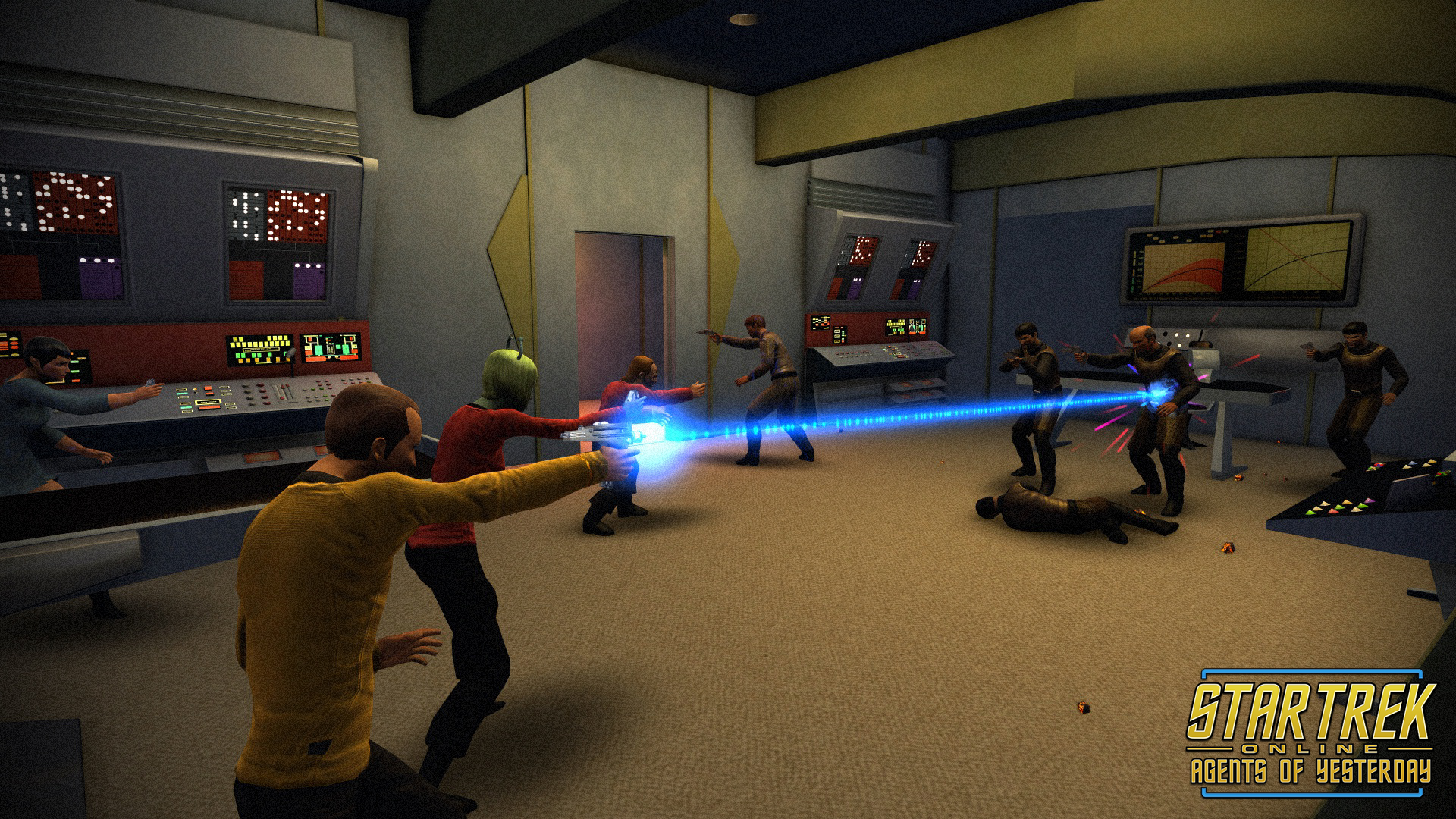 Above: Set phasers to fun!

GamesBeat: Can you still use some of these ships in the modern era, the classic ships?

Ricossa: We have kind of future versions of these ships. You can put the Original Series costumes on them. We’re kind of saying that when they’re working in that future era, the guts of the ship are future tech, but the exterior is your classic starship.

GamesBeat: So you figured your way out of that plot hole.

Ricossa: Sure. You’re a temporal agent. You have to have your James Bond car, your Aston Martin with the machine guns. That’s your little TOS ship full of future tech.

GamesBeat: You said you did a lot of research. What was that process like?

Ricossa: Most of us have seen every episode, so we were going through and doing a rewatch and refreshing ourselves. Typically it’s picking and choosing a few episodes, but almost everyone on the team did a full rewatch of the Original Series. It was very cool for the team, kind of something we can bond over. Not just burning through at home, getting through as many episodes as you can in the night.

GamesBeat: It seems like recently, the expansions have been based around a particular show. The last one, Dealta Rising, was a Voyager-based expansion. Now this one focuses on the Original Series. Is that a trend you think will continue? 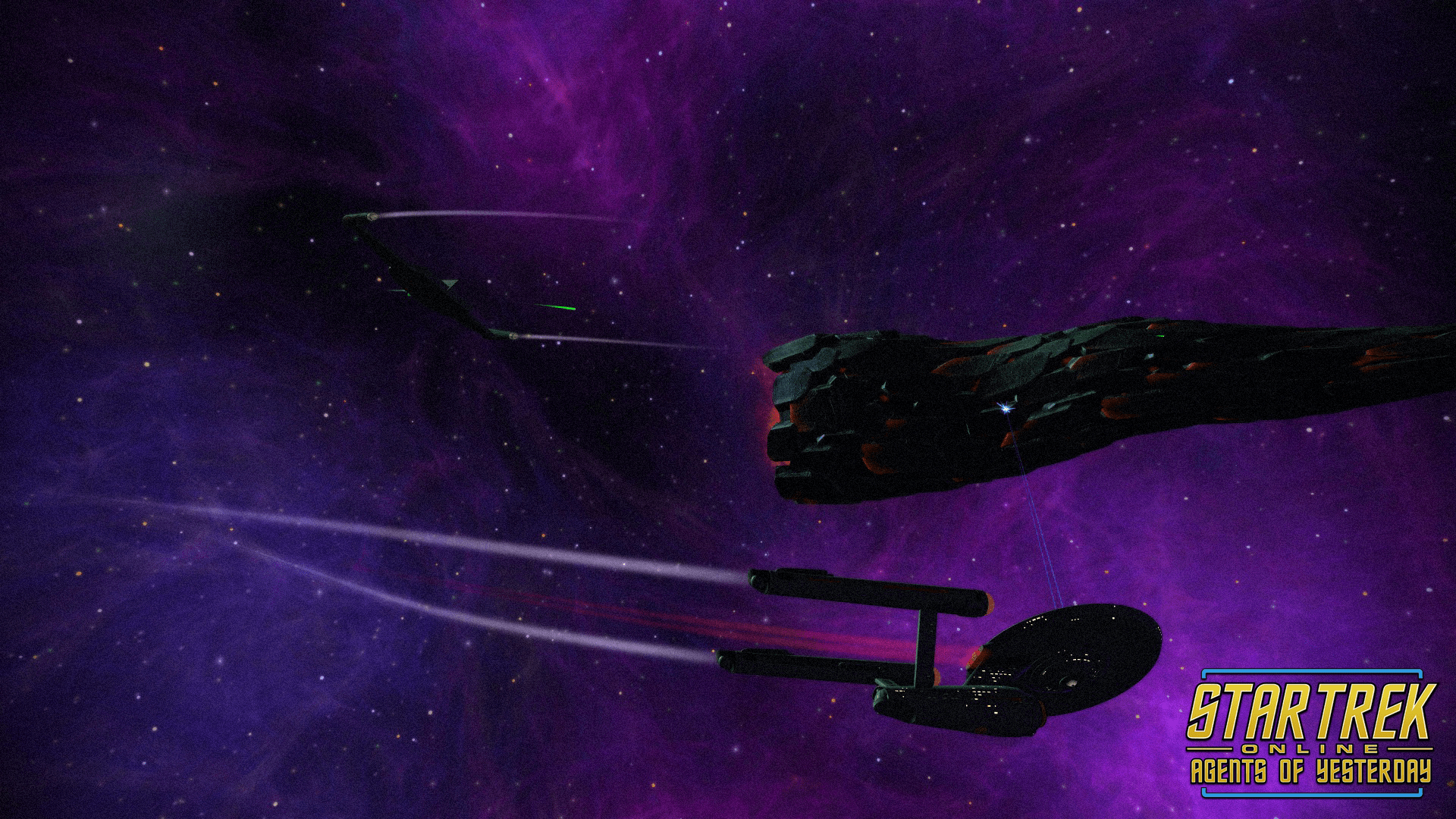 Above: The Enterprise fighting the Doomsday Device.

GamesBeat: I saw that you got some of the Original Series actors to work on the expansion.

Ricossa: That’s correct. We have Walter Koenig, who played Chekov. We have Chris Doohan, the son of James Doohan, who plays Scotty. And then we have Chase Masterson coming in playing Admiral Leeta , the mirror Leeta from the mirror universe. She’s in a few scenes. We have Matt Winston, who played Agent Daniels on Enterprise. And then we have Joseph Gatt, from the Abrams movies. We’re bringing stuff from those movies into the game for the first time.

GamesBeat: How does the Abrams timeline fit in?

Ricossa: It’s not too hard to justify. It’s very cool storylines, very interesting props and ships. It was exciting for us to get right into that. It’s something we looked into 10 or so months before we began work on the expansion and we were able to get approval from CBS and Paramount. That was great.

GamesBeat: What do you think is the main thing your fans want from an expansion?

Ricossa: It’s all of the above. It’s new stories for sure, with new actors they can play with in new episodes. New content to engage in outside of stories. We have the temporal agent recruitment system. We have the temporal primary specialization. We’ve got the reputations. There’s a lot going on in this expansion.

GamesBeat: We know another Star Trek show is coming up. Is that something they let you guys know about, in case you want to use that in the game, or are you as in the dark as all of us are?

Ricossa: They’re not telling us all the details, but we’re probably not in as much dark as everyone else. We’ve been talking with CBS and we’ll have more talks as the year goes on. That way we can get more detailed information. We’re definitely going to get in on the new show. Above: Fighting those dirty Klingons.

GamesBeat: You have so much stuff you could possibly pull from when making an MMO. It’s a property that gives you a lot to look into. Do you have a lot of debates about what the next expansion should be? Or was it obvious that you wanted to do the Original Series?

Ricossa: It was definitely obvious that we should do the Original Series because of the 50th anniversary. But which episodes were going to be represented, that’s where the debates took place. “I love this one, I love that one.”

GamesBeat: Do you have a favorite?

Ricossa: I do. I really like “The Arena.” I think that’s absolutely fantastic. It’s a classic. After the tutorial that’s actually the very first episode.

GamesBeat: Do you think this has enough content for fans of The Next Generation and beyond?

Ricossa: Absolutely. The story is a temporal story, right? So if you create a new character the first half is all TOS, but then you start bouncing around through all different eras. Future, past, present, all over the place. There’s enough for everyone in there.