The Electronic Entertainment Expo trade show is over, and we’ve got a few games we cannot stop thinking about. At the top of that list? Star Wars: Battlefront.

We decided to bring together GamesBeat writers Jeffrey Grubb and Mike Minotti to talk about why they’re so excited for this movie licensed game.

I guess we should get the basics out of the way first: Star Wars: Battlefront is a multiplayer shooter built by DICE, the Electronic Arts’ developer that makes the Battlefield games.

Knowing that, I kinda went into the Battlefront demo that EA was running on the E3 show floor with a lot of skepticism. First, I don’t really love DICE shooters. I’ve always preferred Call of Duty. Second, this is a movie licensed game. EA wants to push this out in November, which will have it on store shelves a month before Disney and Lucasfilm release Star Wars: The Force Awakens in December.

For me, that all meant that I needed to keep my hopes in check for Battlefront.

But, Mike, we played it. And I think I already love it.

What is happening here?

You know, maybe having our expectations lowered was a good thing. Like, it seemed like a lot of people wanted to be down on this game. They were scoffing at the lack of space battles and whatnot. But after playing it, I couldn’t care less. The experiences they presented us, with the Hoth multiplayer level and the Sullust co-op wave-based thing, felt great.

You know, there’s definitely that Battlefield flavor, but — and I worried about this — it doesn’t feel like Battlefield 4 with a Star Wars skin. In some ways, it feels like the most Star Wars-y Star Wars game I’ve played. Being in charge of the guns on an AT-AT and shooting down a Rebel snowspeeder piloted by another player as it whizzed by me — that was a legitimate movie moment that I was able to organically and spontaneously create in the game.

And it takes all the best parts of Battlefield to make a good Star Wars game.

The Hoth level that you mentioned, DICE sets it up a lot like one of its standard multiplayer levels where the two teams fight over a couple of points on the map before moving on to an entirely different part of the level. Only in this game, that march forward is all about the AT-ATs stomping through the snow to get close enough to take out the Rebels’ shield generator.

And while it was awesome to get those power-ups that enable you to pilot the AT-AT (well, really just aim its weapons), it still felt so incredibly like Star Wars when I was on the ground as one of the grunts. 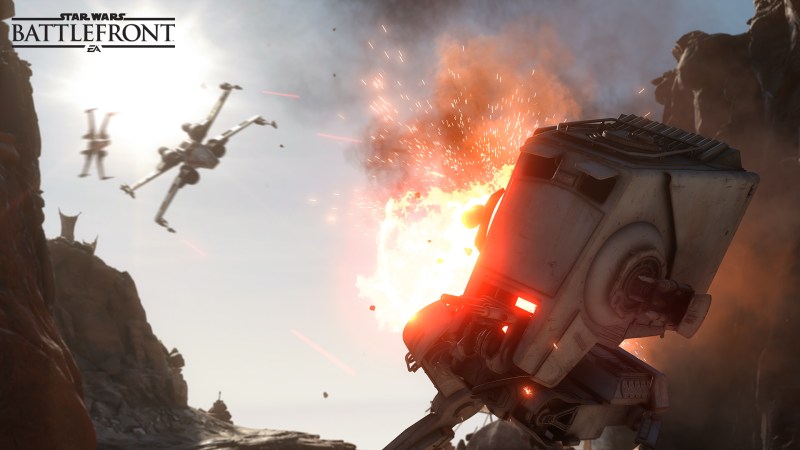 This feels a lot like when I played Shadows of the Empire for the first time. That ancient Nintendo 64 launch game nailed the feeling of the Hoth battle from the air by putting you in a speeder. Since then, we’ve just wanted games to give us more of that. And yeah, this level does feature some of that, but it does for the Stormtrooper vs. Rebel combat what Shadows of the Empire did for the snowspeeder vs. AT-AT combat.

Yeah, the Hoth level is ultimately about controlling points on the map, but the objective really feels more important and logical than that. Basically, the win condition for the Empire is protecting the AT-ATs so that they’ll eventually march to the shield generator and destroy it. The Rebels need to destroy the AT-ATs to win. The control points actually allow the Rebels to call in Y-Wing attacks that will make the AT-ATs vulnerable to attack. So, yeah, you still get that tried-and-true control point gameplay, but it feels much grander and purposeful here.

The Shadows of the Empire comparison is interesting. Like Battlefront, that was the first big Star Wars games on a new console generation. It showed us just how much closer we can get to replicating the experience of the movies digitally. And I think the fact that the PlayStation 3 and Xbox 360 generation kind of lacked in great Star Wars games (Force Unleashed was fun but not really memorable) also really helps Battlefront. I mean, when you think of Star Wars shooters, you think of the original Battlefront series, Jedi Knight, and Republic Commando. Those are all pretty old games. We’re well overdue for a new one. 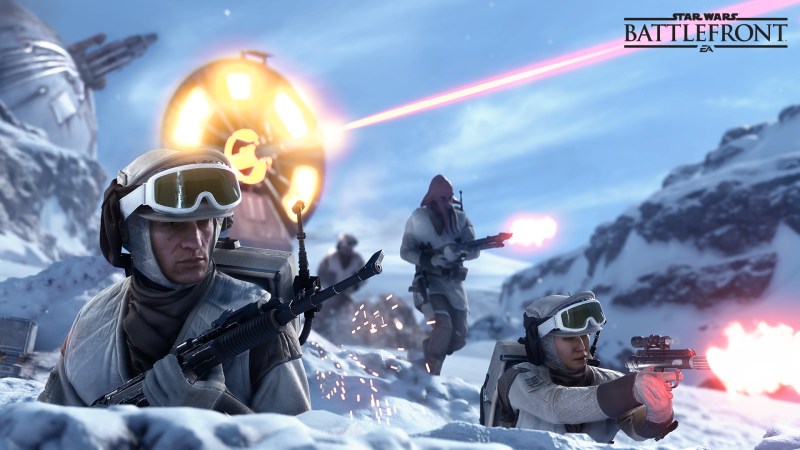 So I’m hyped. You’re hyped. But should anything worry us?

I can’t think of any game I want to play more after going to E3 than Star Wars with the possible exception of Mario Maker. But I kinda know what to expect from Mario — I think that Battlefront could still let me down.

We have a great multiplayer core here, but I hope that DICE has had enough time to refine several stages. I want the same level of Star Wars-ness that I got from Hoth on at least eight awesome maps — and preferably a lot more than that.

And the lack of a “real” single-player experience is going to hurt it as well. We played the cooperative mode together, and I dug the wave-based mechanics. But that’s not going to replace a story campaign for a lot of people.

So my biggest concern is that Battlefront comes out and has some really great stuff, but not enough of it.

How about you, Mike? Are you worried about anything when it comes to Battlefront?

The idea of not having enough maps bothers me. That was one of my hang-ups with Splatoon. The game itself was great, but it needed more content. At this point, I don’t doubt that Battlefront will be super fun. I just hope that it has enough maps and modes to make everyone and me happy. And I don’t want it to be a situation where content is light and then they promise DLC, even free DLC, later.

Other than that, I’m feeling pretty good. The lack of a single-player campaign doesn’t bother me too much. I mean, I remember one of the older Battlefronts had one that was pretty much just bot matches on all of the maps with some voice-over between them. I don’t really think we need that. And, like you, I was someone who really enjoyed Titanfall, and the lack of a real single-player campaign didn’t bother me there. I’m fine with a game that focuses on multiplayer, as long as that aspect fully delivers.