A technology company in Washington state has 75 million users. It earns more profits-per-employee than Apple or Google, and its fans adore it. That company is Valve Corporation, the developer that first created the popular PC shooter Half-Life back in the ’90s and now runs online software store Steam.

Valve is a behemoth in the game industry, but it isn’t satisfied with its past and current achievements. No, Valve is currently working on changing the nature of the PC forever by taking on Windows, turning its community into content creators, and helping to bring virtual reality to consumers.

Right now, Valve’s biggest project is working with hardware manufacturers like Dell and Alienware to produce set-top boxes that run its new Linux-based operating system called SteamOS. The company calls these boxes Steam Machines. Both the hardware units and the new OS take their names from (and fully integrate) the Steam digital-distribution network. Valve’s plan for the Steam Machines is to combine the openness of PCs with the convenience and accessibility of consoles on living-room television sets.

It’s a bold strategy — one that would sound kinda crazy coming from any other company.

The truth is, gamers would laugh off a plan like the Steam Machines from anyone else for a number of reasons: Linux is not Windows. PC gamers don’t care about playing in the living room. The open nature of PCs is the antithesis of the curated platforms that big companies like Nintendo, Sony, and Microsoft have offered for years on the television.

These are all major hurdles — obstacles of perception and technology. So why aren’t gamers laughing at Valve?

To understand why this big idea seems reasonable coming from the Bellevue-based corporation, you need to understand Steam. We need to look at what Steam is now and how it got to the point of totally dominating PC gaming.

The reach of Steam

Let’s get the basics out of the way. At its core, Steam is the iTunes of gaming. 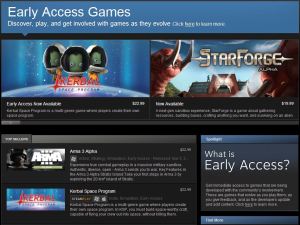 Above: A game for sale on Steam.

It is a portal through which developers and publishers can sell software to gamers. It’s all digital, which means that unlike Amazon, customers have no option to order a physical disc in retail packaging. Valve takes a cut of what’s sold. Publishers and developers take the rest. Once a customer buys a game, they can then use Steam to launch it and connect with others.

The service offers games from major companies like Assassin’s Creed publisher Ubisoft and Call of Duty publisher Activision, but Steam is also one of the best platforms for independent studios looking to sell their products. Small developers can make a lot of money on Steam, which is primarily due to the size of Steam’s customer base.

Steam has 75 million active user accounts, according to Valve.

That’s a massive number of people logging onto Steam to play and potentially purchase games. On an average day, the service hosts around 6.5 million peak concurrent users.

The thing about these numbers is that they are even more impressive when you consider the nature of a Steam customer. This isn’t the same kind of “daily active users” that frequent free-to-play games like Clash of Clans or Candy Crush Saga on mobile.

If Steam is an iTunes for gaming, Valve sets the service apart with its blockbuster quarterly sales. Four times a year — in winter, spring, summer, and fall — Valve and its publishing partners mark down huge swaths of the back catalog available on the store. Games that sold for $60 just a few months before will go for $30 or potentially much less. Many frugal gaming fans purposefully hold off on new purchases to pick up a bigger number of titles during these discount periods. This is in addition to smaller, more focused weekly sales.

At this point, Steam isn’t the only service holding these kinds of sales. Amazon, GOG, and others all features massive discounts quarterly or biannually. Valve’s sales are the ones that usually grab headlines and the attention of the wider gaming community.

Thanks to these bargains, even people with only a passing interest in gaming often have a pretty substantial library of titles on their Steam account.