SHANGHAI — Xaiofeng Zeng is one of the veteran analysts who studies the Chinese gaming market. And he lives in Shanghai. Zeng works as a senior analyst for market researcher Niko Partners, and he recently forecast that the Sony and Microsoft game consoles will sell just 550,000 systems in 2015 — a tiny amount compared to expectations.

He is, however, bullish on the growth of a variety of segments in China’s multifaceted market, including PC online games such as multiplayer online battle arena (MOBA) games, mobile games, over-the-top (OTT) set-top box gaming, and the export of Chinese games to Western markets.

Talking through a translator, Zeng spoke frankly about the realities of the market in one of the world’s fastest growing markets which, at the moment, faces a lot of economic uncertainty.

Here’s an edited transcript of our interview. Here’s a link to our interview with Zeng a year ago. We’ll be talking about a lot of these topics at our GamesBeat 2015 conference on October 12 and October 13 in San Francisco. 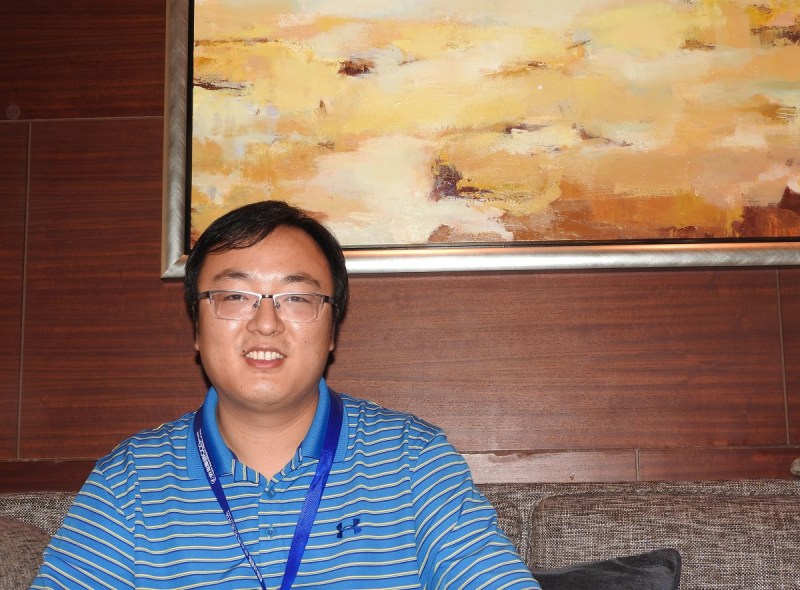 GamesBeat: I wonder what your view of the Chinese market is right now based on what you’re learning at ChinaJoy. The stock has slowed down. I don’t know if that’s affecting attitudes about the attractiveness of investment in the game industry. There also seems to be a lot of interest in moving out of China, into other territories. We’ve seen the news about the distribution of consoles going wider. Does any of this affect your market predictions?

Zeng: At ChinaJoy I’ve seen two trends. One is introducing domestic products outward, the other is bringing overseas games to the local market. Between those two, the more important one is that I see more Chinese people wanting to bring their own products to other markets. That’s for two reasons. One is increasing competition in China. The other is that Chinese enterprises are very interested in investing overseas, especially in southeast Asia.

We’re optimistic about the Chinese market, though, because there are a huge number of players here. I can see kids as young as five or six playing games from companies like Tencent. That’s good news for the future of the game industry.

We have different situations in different areas of the game industry. PC continues to slow down, but it’ll continue to account for a large amount of market share in China. Multiplayer online battle arena (MOBA) games are a big factor in that share. 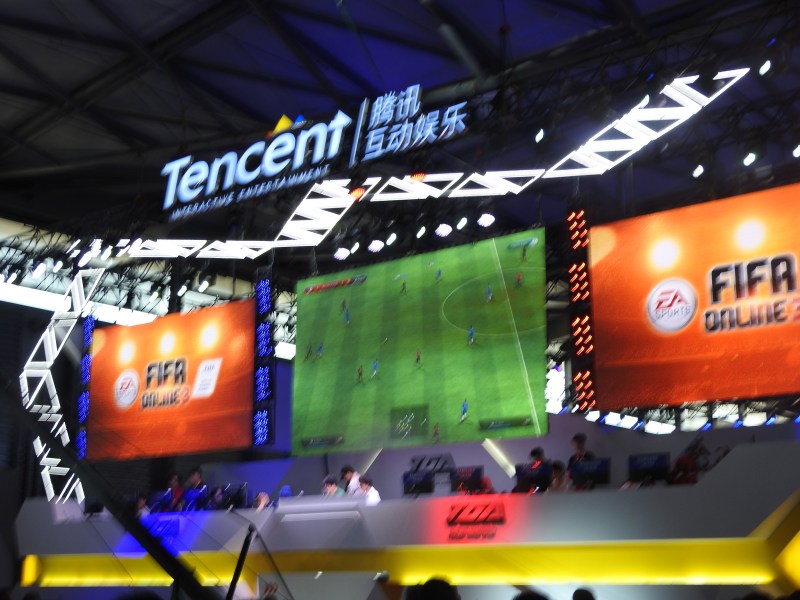 GamesBeat: Do your numbers already show that China is the world’s biggest game market in 2015? Does it still have the fastest growth rate among the big territories?

Zeng: I need to reconfirm that, but I’m pretty optimistic that if we combined PC and mobile together, the result would be as you say. For consoles, last year the government loosened policies as far as the importation of console games. Now gamers can buy genuine products. But the market performance is still below expectations for the console companies.

For set-top box gaming, the situation is similar to mobile games. It’s easy to use and combines well with other entertainment on the TV. People can enjoy simple games at home that are similar to their favorite mobile games. The growth rate in that market should be very positive. 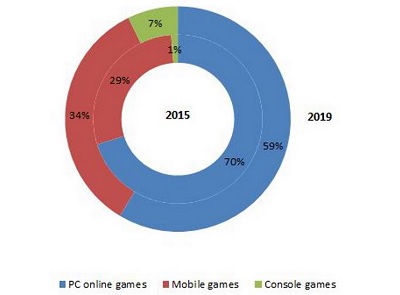 Above: Niko Partners predicts PC online games will continue to dominate in China.

GamesBeat: Is that getting to be a larger measurable market for games, the over-the-top set-top boxes and Android consoles?

Zeng: There are some bottlenecks when it comes to the future of the OTT box market. One is government policy. At the end of 2014, the government released a policy indicating that OTT boxes need to work with content providers, which sets limits on the content the box can provide to audiences. This is a kind of censorship, both of content and of distribution. While that’s in effect, this might be a limited space.

The second issue is consumer behavior. A lot of consumers in China aren’t used to watching TV anymore, especially younger people. Transferring their consumer behavior from mobile and PC to a TV-based system—that won’t be transformed in a short time.

The third issue is the games themselves. OTT box games are too similar to mobile games, with the exception of the controller interface. PC games are very different from mobile games. If we don’t see games that are very attractive consumers, that encourage them to put down the phone and stay in the living room, that’s a problem. Developers will need to create games that pull players to the OTT box.

Mobile games are enjoying the fastest growth rate in China, but at this year’s China Joy, I see medium-sized and smaller companies having a hard time digging in to the market. There might be problems as far as further growth for those companies.

GamesBeat: I wanted to ask about the console market. You’re predicting 550,000 sales for Xbox One and PlayStation 4 in China this year, which is a relatively small number. Can you explain why it’s still so difficult to sell consoles here?

Zeng: We’ve estimated that between Xbox One and PlayStation 4, the total sales in China this year will be more like 550,000 consoles. Up to the end of June, they’ve sold about 300,000 so far, which is far below expectations from most consulting firms.

I had an interview with a representative from Microsoft recently. They told me that the reason for the slow market penetration is because they had too few games. Compared to the overseas market, which already has hundreds of high-quality games, China is very different. In March and April of 2015, Sony opened the lockout on the PS4 so that you can play pirated games, but still, official games for the platform are very few.

GamesBeat: Are both the consoles and the games still too expensive?

Zeng: We’ve done a market survey. Consumers now think the price is quite reasonable. That’s not the problem. The problem is that there aren’t enough quality games to attract them to playing on console. Sony and Microsoft have done similar surveys and found similar results. Hardware prices are decreasing, too, so that’s becoming even less of an issue. 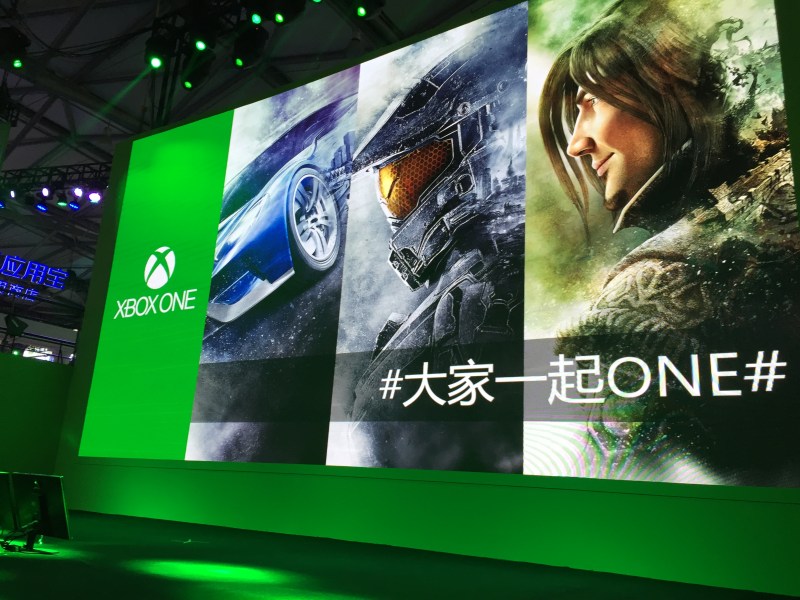 Above: Microsoft led with its branded characters for its major franchises at ChinaJoy 2015.

GamesBeat: Phil Spencer from Microsoft spoke here. He said that publishers need the government to approve more games. I wonder if that’s also a slow process.

Zeng: The government does enforce strict censorship on games. On the bright side, they’ve accelerated the approval process for console games. It’s not enough for Chinese gamers yet, though. 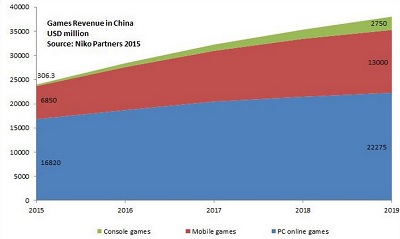 Above: China will see strong growth across the board in gaming.

Zeng: I’m familiar with the game, but I’ve never played it. From the information we’ve gotten from Sony and Microsoft, they expect a number of big game releases in August. But for the moment I don’t see any big market penetration coming through these games.

GamesBeat: Robert Xiao, the CEO of Perfect World, told me they’re working on multiple Xbox games for the Chinese market, and that they’ll release them every year going forward. Spencer said that his definition of success would be to have Chinese-made games appearing on the Xbox One in China and becoming successful worldwide beyond that. Are those prospects that could improve the market?

Zeng: Perfect World has closed studios in Chengdu and other cities that were working on console games. I agree that it’s the first company designing for Xbox, but I doubt that it’ll create any exclusive Xbox games. It might be easier for them to transfer games from PC to Xbox. There are professional teams in Shanghai still working on Xbox game design, but the major part of them are targeting the overseas market. The console market in China is still too small. A couple of companies are also working with Sony, but they do games similar to mobile games.

GamesBeat: Do you feel that Chinese game companies and Chinese consumers are excited about virtual reality?

Zeng: We did a focus group on VR with Chinese consumers. When we first showed it to them, they thought it was very cool and were very excited. When we started talking about price, though, they were less committed. They also have their own ideas about VR. They wonder whether the headsets will affect your eyesight, whether they’ll be too heavy, whether they’ll make you dizzy.

But mainly consumers are concerned with price. Mobile games are popular because they’re free. People are also concerned about the type of games they can play on VR devices. Games like shooters or sports might be good for these devices, but many other genres might not be. 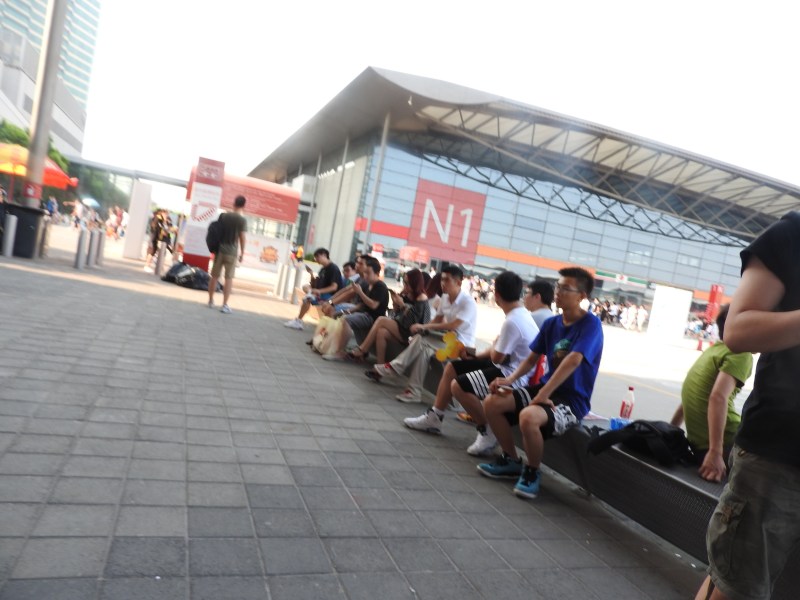 GamesBeat: This is the second year I’ve come here, and I’m still running into Chinese game companies I’ve never heard of that have more than 1,000 employees. It’s very exciting and surprising. What are some of the most interesting things, to you, about the Chinese market that might be likewise surprising?

Zeng: What surprises me most is that every year when I come to ChinaJoy, the biggest companies are still the traditional ones. We don’t see new companies moving to the top of the game industry. The companies, as you say, that employ more than 1,000 people, are very big in size, but the quality of the games they make will never take them to the top.

GamesBeat: What do you notice about the behavior of some of those big traditional companies, like Tencent? What sets them apart? It seems like most of them are still trying to buy Western companies or bring their content to the West as well as expanding into markets like India. Is going global still the predominant pattern with these companies?

Zeng: I do believe that their focus is on the overseas market. Tencent has an office in the U.S. Before, there was a great deal of research and development there, but I believe they are now in favor of buying up more independent games made in the United States. I see that trend continuing in the future. Also, for these big companies, apart from sustaining their status and market share on PC, they’ll put more of their effort into mobile games.