In the competitive field of trading card games, few stick around long enough to make any sort of lasting impression, especially those that spawned from existing entertainment franchises. And continuing to thrive in 2016 means competing with far more affordable electronic card games like Hearthstone: Heroes of Warcraft, which leads a $1.2 billion market.

Despite these challenges, the Pokémon TCG managed to stay among the most popular hits in the genre for nearly 20 years, and it’s still going strong thanks to some smart design and a wildly popular theme. But more than anything, the reason it’s still near the top is because it embodies the Pokémon franchise — which brings in $2.1 billion a year  in merchandise, TV, movie, and game revenues. It gave it an even more social vehicle long before Pokémon Go brought crowds of trainers together. 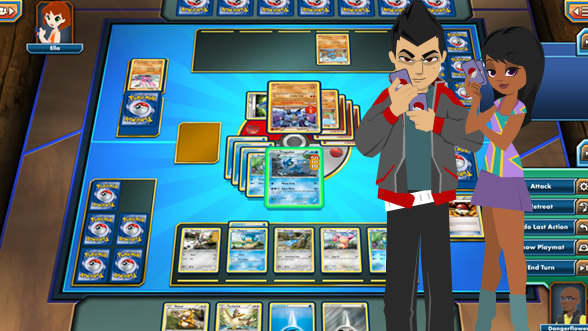 Above: You can even play online on a virtual tabletop with other peop

The heart of battle

The most critical reason the Pokémon TCG enjoys such popularity is because of how closely it simulates battles from the main series without dumbing them down. You still field a team of up to six Pokémon and battle your opponents’ 1-on-1, with the option to swap them out for a fresh Pokémon if you so choose. Here, your team is made up of cards you draw from your deck, which is far more variable than the video game where you just choose which Pokémon you want in the battle. But the variance has a remedy — you can build your deck to include whatever Pokémon you want as well as cards that let you go find specific other cards and put them into your hand.

Now if you’re used to card games with seemingly more complicated board states like Magic or Hearthstone, 1-on-1 battles must sound incredibly dull. But that vastly underestimates how many shenanigans happen with benched Pokémon, including abilities that let you swap monsters on the sly way easier than it normally is to or deal indirect damage to benched Pokémon. There’s also Evolution cards that let you evolve your squad, letting you choose whether to beef up your active Pokémon or investing in a future fight by shoring up your Benched ones. Trainer cards fill the same role as items in the video games, letting you heal, buff, or affect your performance in some way.

More than anything, though, the overall structure of how the TCG is played is equal parts breezy and dynamic, making for an accessible experience for any kind of Pokémon fan.

Still, it’s not even close to being an exact 1-to-1 conversion, mostly thanks to how differently card games often operate to video games. Random chance is a much greater issue, meaning the classic win condition of knocking out all of your opponent’s Pokémon becomes lopsided. If you include too few Pokémon cards in your deck, you risk having too few committed to the board, paving the way for your opponent to steal a quick win. Because of this, decks are built in a way that prevents this from happening usually, and because you can replenish your supply of Benched Pokémon with any new ones you draw, trying to deal with your opponent’s entire force can become a laborious task.

Enter Prizes, the secret spice that makes the game interesting. Players begin with six cards in their deck face down in front of them. When someone knocks out an opponent’s Pokémon, they can take one of these cards into their hand. Once all six Prizes are taken, that player wins. 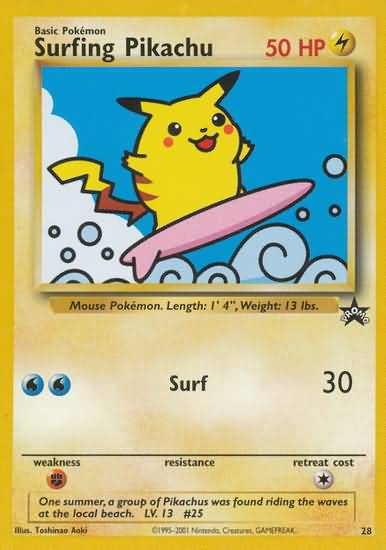 Above: Yep, Surfing Pikachu is a real card.

This mechanic works so well because it grants a feeling of gratification and achievement before a winner is ever declared, lending a more concrete narrative ebb and flow. It also plays around with the inherent variance of a deck of cards by always threatening to lock you out of certain cards in your deck. Thanks to the many cards that let you search your deck for a specific card, the best decks can mitigate the randomness of drawing cards. But because six of your cards are set aside as Prizes, it’s not a given that you’ll have access to the card you need, creating a kind of tension not seen in other games and an urgency to KO your opponent’s Pokémon to claim your Prizes just in case something you need is among them.

More than anything, the Pokémon TCG is about having fun with Pokémon. That sounds trite, but lots of the cards treat the property with a sense of whimsy not found in the rest of the franchise’s media. One needs only to look at the varying Pikachu promo cards to understand that, including a Surfing Pikachu that uses a Water attack, and a Pikachu that uses balloons to fly and can use the Fly special attack. One of the earlier sets also focused entirely on recurring series antagonists Team Rocket and evil (dubbed “Dark”) versions of Pokémon. There was even a card that simulated the silly contraptions that the bumbling team used.

Another big part of the thematic appeal of the TCG is that it features much more overlap with the cartoon than the video game. The visuals of many of the cards depict the animated versions of all the characters, putting them front and center, which gives it maximum multimedia synergy, something the Pokémon brand has mastered over the years.

But perhaps the biggest reason for its success is the fact that it literally brings Pokémon fans together. You absolutely can experience the video games playing by yourself and only sharing your experiences with others after the fact, but it’s next to impossible to say the same about the TCG, where its entire focus is multiplayer. Even when you’re playing a Pokémon game single player, the franchise has always emphasized that the core of Pokémon is social. It’s about the love of Pokémon and sharing it with others who love it as well, the exact reason Pokémon Go is such a smashing success, and the TCG is no different.

A Pokémon by any other name

Really the branding is at the center of what makes the Pokémon TCG special. That sounds pretty cynical, but really it’s a perfect convergence of how flexible a franchise can be, how it can escape its own bounds and expand its own definition.

Solid mechanics and thematic elements that stay true to its source material don’t just make for a great game, they come together to create an experience that’s as much Pokémon as the video games are.