This shows that it’s still possible to create a core console game with spectacular demand. The new game works with an iPad app that has also gotten more than 1.5 million downloads.

While Assassin’s Creed may generate more revenue now, Watch Dogs is something that could create more new customers for Ubisoft in the long term, Guillemot said.

We attended a press briefing with the chief executive of French game publisher Ubisoft on Sunday evening. Here’s an edited transcript of our conversation.

GamesBeat: Does it look like Watch Dogs can potentially become a huge franchise for you guys? Is that the idea?

Yves Guillemot: It is. We were able to create tools and mechanics that we’re going to improve on, step by step. We think it can become a huge brand for the company. The subject of hacking has endless possibilities. There’s a lot of potential in the long run.

GamesBeat: I know there had been a lot of attempts to make good interactions between tablets and games. Do you think that’ll be a big element of future games?

Guillemot: I think so. I’m happy it worked well, because it’s going to help us go one step further. What we liked very much is the seamless online multiplayer and single-player, also. That’s something we think we can develop, giving you a chance to play alone and also have your friends come in and have fun with them. Those two things stand out.

GamesBeat: Do you have any estimate of how much people use the online capability?

Guillemot: We had almost 1.5 million downloads of the mobile app. On the multiplayer, I don’t have stats to hand. A lot of people played with it, but I don’t have an exact number.

GamesBeat: So that’s 1.5 million out of 4 million that bought the game?

Guillemot: Yeah. But what I like the most is that it’s not automatically 1.5 million of the 4 [million]. And the four was only the first week, so anyway you have more. But you don’t need to buy the game. You can download the app, and you can play with other people who have the game. That’s what I want to do a lot more in the future – make sure that even if just you buy the game, all your friends can compete with you. They can create armies or munitions and share them with you. They get something for their mobile game and you get a chance to shine more in your console game.

That’s what we need to do in the industry. We need to have more people playing these brands, whether they’re on console or PC.

GamesBeat: Do you feel, now that the game’s out and you’ve seen reviews, that waiting to release Watch Dogs was the right decision?

Guillemot: Yeah, we think so. First, it gave us a way to make everything work together. You spoke about mobile and the multiplayer and so on. Current-gen was a factor as well. We needed time to tweak all these things.

What’s interesting, also, is that we’re already doing some extra content. You’ll see more and more of the possibilities of Watch Dogs soon. I can’t say much today – we won’t be talking about it at the press conference — but there will be some surprises there. 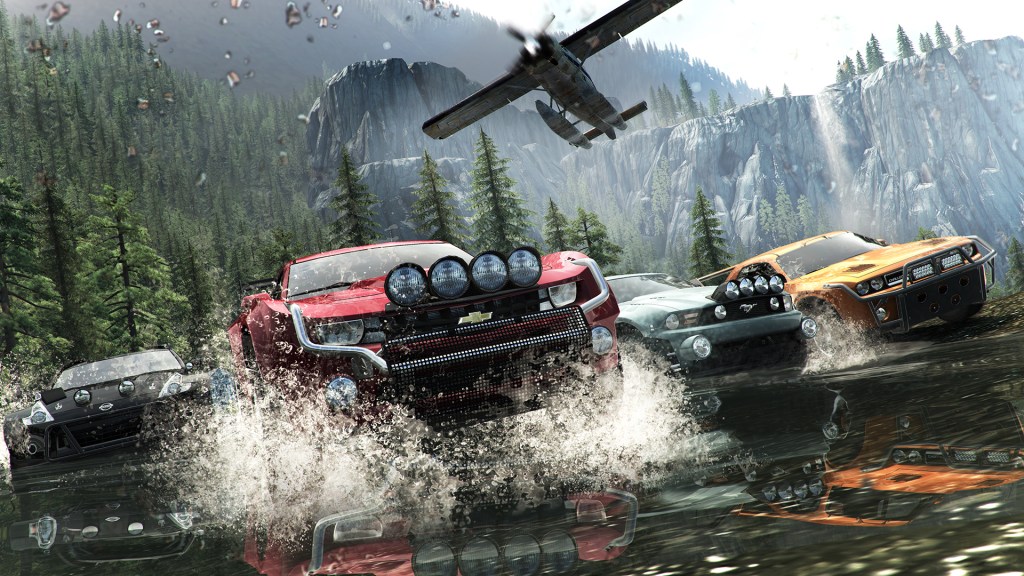 Above: The Crew’s open-world racing levels take place in the United States.

GamesBeat: With a lot of your games – The Crew, Watch Dogs, Assassin’s Creed – you’re deliberately trying to include support for tablets or mobile, but you’re also looking at ways to extend the life of your games, either through making them more like an MMO, or giving them more of an open-world structure. Is that something you’ll be doing with future games as well?

Guillemot: Yes. That’s something we want to do more and more, to make sure you can play a longer time with a game, that you can come back because things change in the future. We want gamers to have an influence on the game, to be able to go into the game and tweak some elements. I want our games to be more alive, so they can evolve, and you’re interested in coming back to play because things have changed. You have the opportunity to be surprised again.

GamesBeat: There were some issues with Uplay when Watch Dogs came out. Do you know what happened there?