If Vivendi had succeeded in its hostile takeover of Ubisoft, you can bet the French video game publisher wouldn’t still have 14,000 employees, including 12,000 game developers. Tencent came in as a white knight investor and bought out Vivendi’s shares, relieving Ubisoft of the looming threat.

Ubisoft is using those developers to work on a very ambitious slate of games, including Assassin’s Creed: Odyssey and the pirate game Skull & Bones. The latter is coming from the relatively young Ubisoft Singapore studio, but no less than six studios are contributing to that game, which arrives in 2019.

While other game publishers use one studio to make a game, Ubisoft long ago broke down game and geographic barriers to get its studios to collaborate in an all-hands-on-deck manner to ship major games as they approached their ship dates. The company is also spending a lot more time on games after they ship.

The original title Tom Clancy’s The Division had a rocky start with a lot of bugs. The number of players returning to the game slipped dramatically at the beginning. But Ubisoft poured a lot of resources into getting rid of the bugs and adding new live events and other content to get gamers back. The result is the strongest audience yet as the company announced The Division 2 at its recent press event at the Electronic Entertainment Expo (E3).

I talked with Laurent Detoc, head of Ubisoft North America, about the company’s strategy at E3. Here’s edited transcript of our interview. 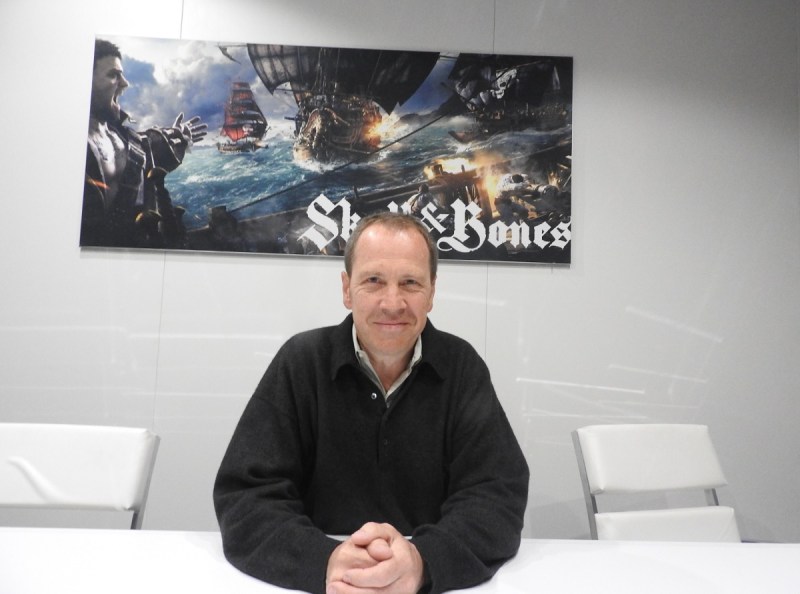 Above: Laurent Detoc is head of Ubisoft North America.

GamesBeat: What do you think of the battle royale craze?

Laurent Detoc: I was going to go by anecdotal evidence. In my house I have a 14-year-old who plays Rainbow Six: Seige, even though his father knows better than to let him play a mature game. [laughs] He’s been playing Rainbow, and then Fortnite comes along. He started playing Fortnite, but until then I couldn’t get him off Rainbow — not with Far Cry, not with Assassin’s Creed. He wasn’t latching on to anything until Fortnite comes along.

Soon after that, though, I realized that he was going back to Rainbow more and more. There was a pattern to how he played one or the other. When he’s with his friends at home, they play Fortnite. There’s an added element to that. But when he’s alone and wants a 15-minute break, he’ll play a game of Rainbow. He’s now playing more Rainbow than he was two months ago.

GamesBeat: Does he want Rainbow with 100 people?

Detoc: That’s the thing. I don’t think Rainbow is the right game to play with that many people. Not every game is going to lend itself to a battle royale mode. That’s why I make the loose comparison to Capture the Flag. A number of shooters may end up having a very credible battle royale mode inside them, because it makes sense. It works with their gameplay. We’ll see if Fortnite can maintain such a strong ownership of the genre, or if it turns out to be more popular as a mode for many games.

GamesBeat: It seems to have all of the things that finally came together. The free-to-play, the more accessible art style, the crazy fun.

Detoc: They do a lot of things right, for sure. The dance moves are extremely popular. You can’t do the dance moves if you have a hardcore military art style. That wouldn’t jell very well. 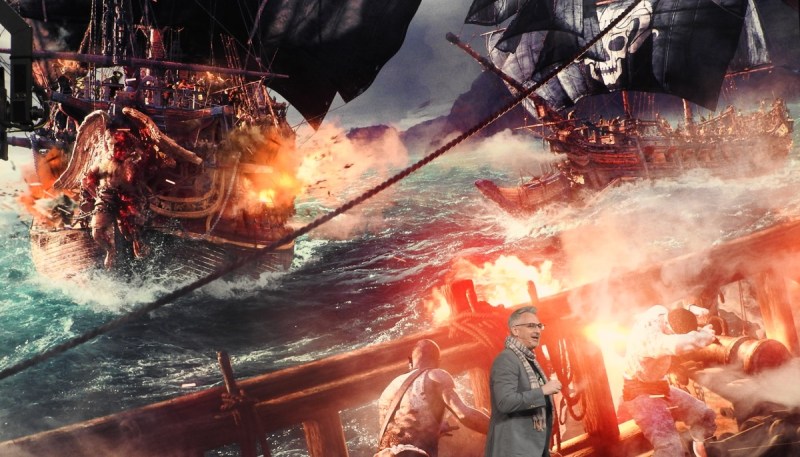 GamesBeat: I played Skull and Bones, and I’m not sure that would work with 100 people either. It seems like almost random luck as to who survives to the end. It’s hard to kill 20 ships before you sink.

Detoc: The shooter genre lends itself really well to the idea. There may be some games that take place at shorter ranges, a melee or other short-distance game that ends up working with a big group, up to 100. My point is more that the aspect of playing battle royale will exist in more games, and by extension make it less special than it is today.

GamesBeat: Any other big trends you noticed at E3?

You have multiplayer-only games, or games with extreme amounts of multiplayer. The Division 2, Skull and Bones. They continue over time. You build games that last 10 years. If we go back in time, you launched a game and moved on. Three months later that game is mostly dead. Now we keep on working.

The Division 2 has a very good story to tell from the first game. At first the game was highly anticipated and delivered a lot of content, but then it quickly fell short. We talk about how consumer sentiment went all the way down to 30 percent positive a few months after it shipped. I started an 18-month turnaround with the release of patch 1.4 that tried to fix a lot of those issues. Patch 1.8 was another landmark event. As a consequence of the work we put into the game with those patches and update, customer sentiment is now 80 percent positive. 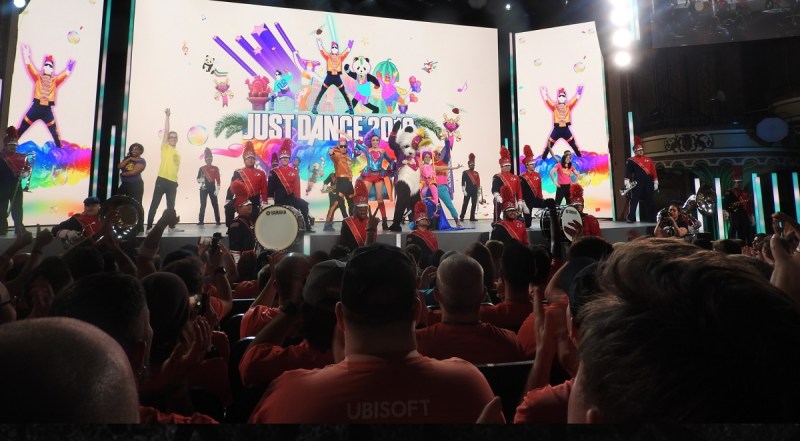 Detoc: It hasn’t happened in the past because this just isn’t how publishers have historically approached engagement and retention in games. We didn’t need to. A game was done and it shipped. There weren’t live elements to a game. Now that games have live elements, the smart way to handle them is to keep working on them to maintain engagement. That way you can build toward the next game, too.

We’re not alone in doing that entirely. Not that I’m too much in the business of praising my competitors, but I remember when Diablo III had a dozen or more patches in the first year of release. People seem to look at that more like, the game was broken and it needed a lot of work to fix bugs. But it’s the same spirit. Whether the game is broken or it’s missing some elements, it creates a similar kind of frustration from the player, and you address that the same way. You continue to work on it. 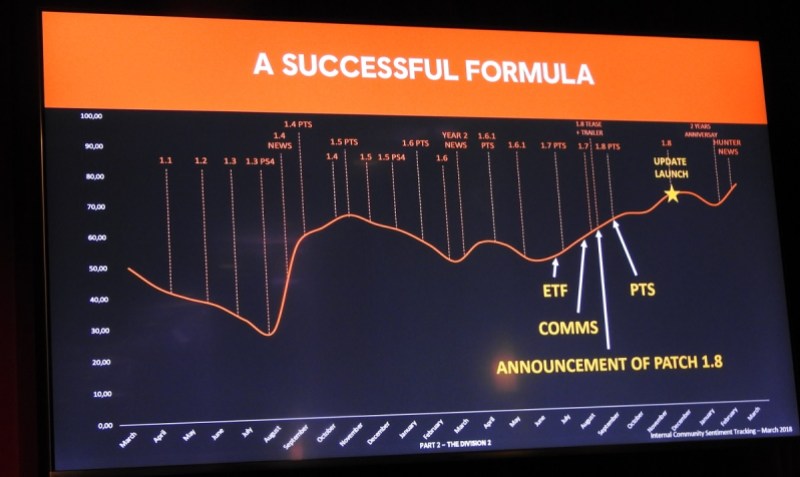 Above: How Ubisoft brought The Division back.

In the case of The Division we added gameplay. In the case of Rainbow we added content. In the case of Ghost Recon we built on the PvP mode six months later. You keep on adding to the experience, and you see people talk about it later. After a year and a half people said that The Division was the best it was ever been, and that helped bring in even more new people. A lot of the people who’ve played The Division came to the brand after patch 1.4. They saw the game in a much better state. When you look at that sentiment going from 30 to 80, a lot of people first came to the game when it was doing better. Now we’re looking at Division 2 with a super happy community, very engaged and satisfied, and they’re looking forward to the sequel.

That trend is certainly going to continue. Games don’t end. They don’t stop. We have to commit to making sure that they don’t stop. When people understand that, they stay with them. 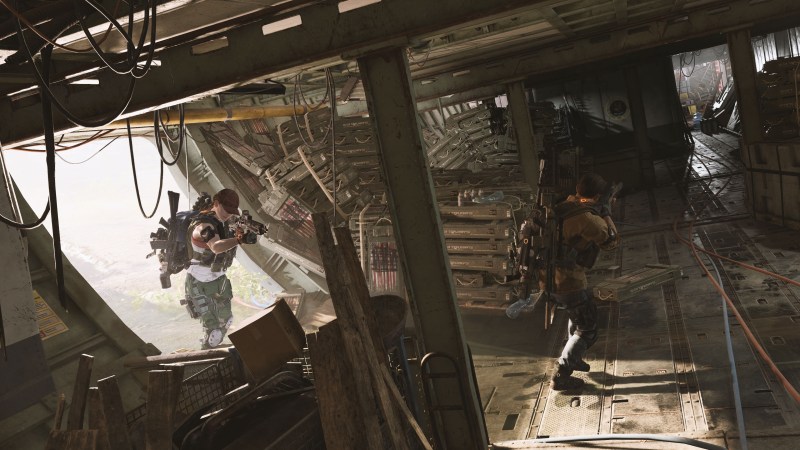 GamesBeat: I see a double-edged sword here, where we see very compelling economics for multiplayer and live operations. You can launch a game and grow its sales year to year. It doesn’t tail off. But I worry about what happened to something like Amy Hennig’s Star Wars game at EA. Publishers just say they don’t want to make linear single-player games anymore. You lose the single-player inspiration for playing multiplayer. I feel like that’s what single-player has always done. It tells me why I’m here and why I want to go back to the universe and the story. I worry that those economics are going to mean that single-player gets left behind.

Detoc: Part of the answer to that is accessibility. Multiplayer modes are very difficult for me. My eyes don’t twitch fast enough. Going back to Rainbow Six Vegas, I remember being about 20 hours into the game, and I thought I was good enough to go online. I got slaughtered. I felt like there was no place for me there. I’m not “professional” enough. So I played the single-player part of the game.

Going back to the same brand today, it’s hard for me to play Rainbow because it’s too difficult. I don’t win very much. So how do you keep guys like me or you thinking that single-player is a stepping stone to multiplayer? I think you have to make it more accessible, which we’re doing. We just did that on For Honor recently, where we brought a whole menu of progression so that people can understand how to play better.

It’s a different single-player experience compared to what you were talking about, the very strong narrative, but still, the single-player experience exists. With For Honor we have statistics on how people who go through the training end up performing better afterward in the multiplayer. It’s still missing that layer of storytelling, because accessibility is only one part of the equation. But it at least engages single-player gamers more than just throwing them to the wolves in multiplayer.

To the element of narrative and storytelling, I think we have enough of that in the business still. God of War just did well. Far Cry 5 just did well. Assassin’s Creed is very strong in that area. Those first two games I mentioned, they arrived in the landscape of Fortnite being the surprise of the decade, but they still did well, and they have very strong narratives. I don’t think it’s quite over. A lot of people still want to have their hands held and be taken through those types of experiences, like with Odyssey later this year.