Rovio’s ambition is to make Angry Birds bigger than Mickey Mouse. But to do that, it has to keep making games that are more popular than their predecessors. With the launch today of Angry Birds Go!, Rovio’s ability to do that will be put to the test.

After all, we all may be a little sick of the cute-and-angry fowls. The pigs are getting on our nerves too, after nearly 2 billion downloads of the previous games. Still, Espoo, Finland-based Rovio is giving it its best shot as the free-to-play Angry Birds Go! storms into app stores around the world in a simultaneous global launch.

These are not the kind of rankings that Rovio has been used to. With Angry Birds Go!, Rovio has taken its birds into three dimensions as they race through Piggy Island. The game is a downhill kart racing title akin to Nintendo’s Mario Kart. It has 50 different soapbox karts. 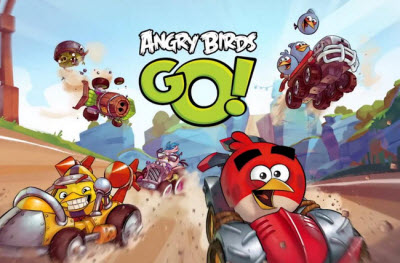 “Angry Birds Go! is our first major free-to-play Angry Birds game, and while we’re super excited to step into this new territory, we’re also staying true to our roots,” said Jami Laes, executive vice president of games at Rovio Entertainment. “As with every previous Angry Birds game, there’s lots of free content and we have great new updates already planned – including the eagerly awaited arrival of multiplayer. Our main goal is to provide an amazing experience with more than enough content to make sure everyone has a blast. We do offer some really awesome premium content for fans who want a bit more, but we’ve designed the game so that you don’t have to pay to have a great time. The soft launch in select markets has helped us figure out what’s working well.”

The game has sponsors for its content, as Rovio has cut deals with State Farm, the Goldfish Brand and Target. The game will also feature connectivity with Hasbro’s Telepods digital toy platform. The Telepods platform, initially introduced with Angry Birds Star Wars II earlier this year, allows the integration of physical toy characters into the mobile gaming experience. Players can teleport their physical Angry Birds Go! karts into the digital game.

“With one million Angry Birds Star Wars Telepods figures sold within a month of becoming available, the Telepods line is one of the hottest toys for the holidays and Hasbro continues to deliver a seamless physical to digital play experience with the new Angry Birds Go! Telepods line,” said John Frascotti, chief marketing officer at Hasbr. “Rovio has developed a fantastic new property with Angry Birds Go! and we look forward to fans enjoying the new Telepods line as well as the Angry Birds Go! Jenga games.”

And those kinds of deals show how much that Angry Birds has become a branding and merchandise play. It’s a broader entertainment platform, not just a game. But the health of the Angry Birds economy depends on how well the games are received. Angry Birds Go! is out today for iOS, Android devices, Windows Phone 8, and Blackberry 10.