Ubisoft hopes to take on the kings of driving games with its open-world street racing title, The Crew. The game really feels like you can just go driving across the entire United States, with more than 5,000 miles of roads.

That huge set of places to drive is one way the company hopes to become competitive with a new brand in a cutthroat category of games that includes Sony’s Gran Turismo and Electronic Arts’ Need for Speed. The Ubisoft title seems like a simulated open world, but it has some cool features that make it extremely easy for friends to gather together and race against each other or with strangers. It is aimed at the next-generation of consoles, as Ubisoft believes that the best time  to enter a new area of gaming is at a time when new consoles arrive and gamers are more willing to experiment. Ubisoft wants to set itself apart by making racing games more social. 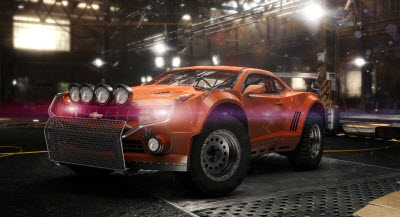 Above: The Crew Camaro

Having played the preview, I can attest that the game appears to be highly ambitious. You can trick out real cars in your garage, like the Chevy Camaro at the right. There are a large number of real cars in the game, but Ubisoft is still signing up car makers so it won’t say how many just yet. Each car has five tunings, and each tuning can have thousands of unique parts. That gives you an idea of how customizable the game is.

The Crew has a huge map of the U.S. for its user interface. You pick a spot and the game zooms in on it. Then you can see a section of the road that is laid out as the race track. You have to beat that track and your friends within a certain time. You can share your score with others and brag about your victory.

You can take to the open road. But the game has a narrative where your mission is to infiltrate and overtake the 510s, a gang that has grown up around Detroit’s illegal street racing scene. You have to grow your reputation in the underground racing scene and sabotage their activities city by city. You have to take down a convoy or escape the police. If you win, you earn some virtual currency that you can spend on parts for your rig.  The map includes large scale versions of New York City, Los Angeles, Miami Beach, and Monument Valley. Each has a variety of challenges for you to master.

Tristan Lefranc, the online producer for the game, said that the game is made for “car freaks” who want to customize their games as much as possible in a living, breathing racing world. He said that you can get caught by the police and fined. That fine is deducted from your virtual currency, so you don’t really want to pile up the citations. You can also earn rewards that reduce the fines that you pay.

I raced through one track in a rural place. I had a huge tricked-out truck and was up against some much faster hot rods. I lost, but tried to make up time by driving across the open country. I did fine with my short cut until I drove into a lake. I suggested that Ubisoft charge for car washes, but there are no such plans right now.

The map includes 1,000 real-world landmarks. The environments include city streets, suburbs, hillsides, cornfields, canyons, desert dunes, or even race tracks. When you race a challenge, you can see how your friends did on the same segment of road and race against their “ghosts.”

You can continue the experience on iOS, Android tablets, and on the web. The Crew lets you keep track of your friends’ performances and tinker with your ride before playing. The game ships in 2014 on next-generation platforms. Ivory Tower is making the game in collaboration with Ubisoft Reflections. They have been working on the game for almost four years. That’s a huge investment. 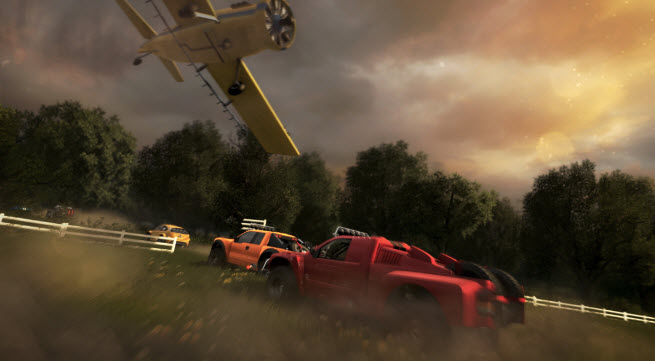 Above: The Crew cropduster