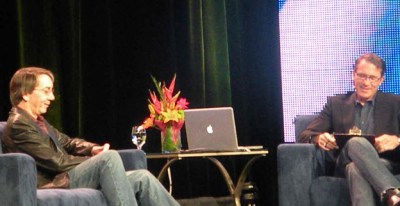 Will Wright believes that successful games depend on a feedback cycle where designers create games and incorporate the feedback and content generated by users. As such, the best games evolve after they ship and game companies should do a lot more to reap benefits from game usage data.

A game designer at Electronic Arts, Wright has created some of the best selling games of all time, including The Sims franchise, which has sold more than 100 million copies. He shared some of his secrets about the process — and how to incorporate users into game design — at the Web 2.0 Expo in San Francisco today in conversation with Federated Media chief executive John Battelle.

Wright acknowledged that his latest game, Spore, wasn’t the blockbuster it was expected to be. Spore is a mult-dimensional game where you could start life as a single-cell animal, evolve into a creature, grow into a tribe and planet-wide civilization, and then take over the universe. Many people expected Spore to be one of the best-selling games of all time, given Wright’s track record, huge publicity that included a cover story on Wired magazine, and Wright’s seven-year journey to complete the game. (See our interview with Wright).

But the game has sold in the low millions and it isn’t clear whether it will have any of the traction that The Sims did. (A new version, The Sims 3, will launch in June, more than nine years after the first game debuted.)

Wright said that hardcore gamers were disappointed with the lack of depth. But Wright said EA had designed the game to be akin to a toy, which is very accessible to a broader market of consumers but is really only appealing if it taps into as the player’s own imagination. The game includes sophisticated tools for creating characters, so much so that the fun part of the game is playing God. On that front, Wright believes the game was successful. Spore players have created more than 100 million creatures, objects, and vehicles which they share with the universe of Spore players.

“The game turns into a tool of self-expression,” Wright said.

Spore lets you upload a video of your creature to YouTube, and it takes the uploaded creatures and uses them to populate the worlds of single-player games. In that sense, the user-generated content makes every Spore game into a unique toy galaxy, Wright said.

To keep Spore interest high, EA is taking the assets and plans to build new Spore experiences. Lucy Bradshaw, who heads the Maxis studio that made Spore within EA, said that the community feedback changed the company’s plans for sequels to Spore. EA has several Spore spin-offs coming and it is releasing an applications programming interface to access the user-generated Spore content so that others can build applications around the database.

“Spore the game is one instance of that data set,” Wright said. “The data set is the valuable part. I don’t want to be all-controlling on this data set. I want it to be the nexus of the community.”

In that sense, Battelle noted, Wright’s beliefs about game design are consistent with the idea of Web 2.0, where users drive the content. Wright also acknowledged that EA was forced to listen to the community regarding its “corporate decision” to include digital rights management (DRM) on Spore, which limited how many times a user could install the game on computers. He said EA was surprised by the outcry from angry users (who faced problems such as unsuccessful installs that used up their installation limits). EA has since rescinded the DRM by issuing a patch that essentially removes it.

“That goes in the category of corporate learning,” Wright said. “People are playing a lot of money for a game. You don’t want to treat them as criminals because of the piracy issue.”

Wright says that game designers have to recognize such corporate restraints as they design their games. They should be imaginative enough to create something innovative, but also recognize there are political hurdles to overcome in lining up corporate support, such as a marketing budget.

As for the future, Wright said that users will drive the roadmap for future versions of Spore and the Sims. Wright said that social games are coming into their own, particularly with the launch of the Nintendo Wii, where watching your friends make fools of themselves in front of the TV with the Wii motion-sensing controller is half the fun. That’s a shift, he said, since designers usually focus on immersive games, where you are completely immersed in the fictional world of a game. By contrast, the Wii has reminded everyone of the fun to be had with non-immersive games, where you are fully aware of who you’re playing a game with.

Wright noted that user-generated worlds such as Second Life are more like platforms, not games. And that the fun of the worlds depends on what the users do with them. The problem that limits worlds such as Second Life is that the creation tools are so hard to use that relatively few people bother with them. At the same time, Wright said that it would be cool to allow users to generate not only objects, but behaviors (such as dancing characters), using tools that don’t require a programmer’s expertise. Again, this fits with Wright’s belief that a game designer’s role is to spark creativity in users.

“We’ve been thinking about how to do that for 15 years,” he said. It’s a hard problem because it requires programming knowledge. But if one percent of the people can program and 99 percent can enjoy it, that could be a win-win.”

The future will involve finding ways to let people get more personally and emotionally attached to games. Wright said that people like to enhance and share their own identities through their wardrobes or cars, and that games should allow the same thing. Wright said he is very interested in games that can intersect with the real world, such as “augmented reality games” that let you play games in certain locations via a mobile phone. In such games, virtual reality combines with the real world.

Wright noted the huge appetite for alternative business models in Asia, where players can play a game for free but pay for virtual objects they collect in games. There is a kind of “Cambrian explosion” of startups trying to tap such models now. Wright says such games won’t kill off $40 retail games, but they will become part of a wide array of game types and business models that users are likely to embrace.

Not surprisingly, Wright’s view of game design spills over into other areas. He said said that games show a lot of promise as a way to better educate children. Since kids love to explore game worlds, they can learn while playing them via trial and error. Playing games thus lets children learn the scientific method that will serve them in the real world. While games are often viewed as a waste of time, Wright said they are great at sparking imaginative fire in kids and so they can inspire children to want to learn about a subject.

“Once you get a kid motivated, you get out of their way and they learn on their own,” he said.