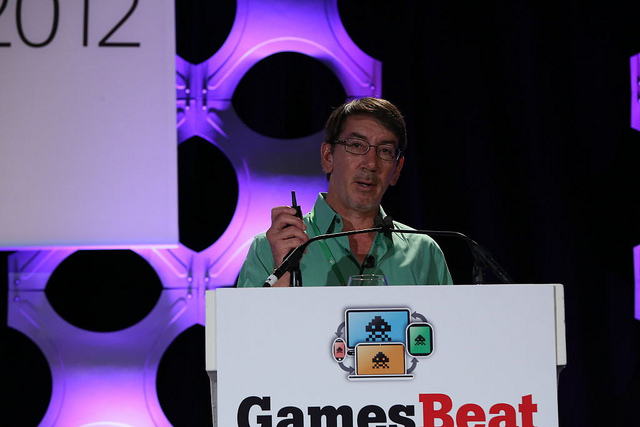 After more than 30 years of steady evolution, gaming has reached its own version of the Cambrian Explosion, SimCity creator and Stupid Fun Club founder Will Wright argued today during his GamesBeat 2012 keynote speech in San Francisco.

“Lately, it feels as if the industry has exploded in a million directions at once,” Wright said, “and I think that’s very healthy.”

Wright is one of the most legendary names in gaming. He’s the creator of the SimCity and The Sims franchises, two of gaming’s cornerstones.

This explosion includes mobile and social platforms, but Wright believes gaming can go still further. “[Video games] should be as personal to us as our dreams,” Wright said.

To illustrate his point, Wright went on a whirlwind tour across 30 years of technology, beginning with how the military uses wargames to map out war plans and continuing through the evolution of writing, the explosion of personal data, and the ways in which technology alters our personal perceptions.

One trend Wright highlighted was the rise of augmented reality through smartphones and other devices, which he argued is conditioning us to a new worldview that effectively blurs the real with the digital. This new perception opens us to possibilities that might have been invisible before, such as “illuminating” something like a gathering of car collectors around the corner that we otherwise would not have known about.

“Gaming technology can be a matchmaking device for the world around me versus very particular things, like what mood I’m in,” Wright said. “I think it could potentially make my life far more interesting.”

Wright also believes in the power of metrics to make experiences more personal, which he highlighted by showing how data from The Sims could be used to uncover roadblocks and other issues, with mechanics being modified to match. Going forward, this data will only get more comprehensive, he said. What Wright described as “little islands of data” are breaking down as we move into the cloud, with the result a growing “wake” of information on social networks. Already, such data influence the design of social games like Farmville, allowing developers to determine what is “sticky” with gamers and what isn’t.

Based on this, Wright believes that the one overriding trend in gaming is personalization. In essence, reality will begin to replace consoles as the platform. “We don’t have these little islands. We are building experiences that are accessible at any time. They will be more like biological experiences.”

The rapid proliferation of sensors such as those in Google Maps and increasingly granular metric analysis will enable such experiences, Wright said. Already, Wright’s Stupid Fun Club has launched a new venture with Warner Digital to explore some of these possibilities, using personal metrics to bring new experiences.

“I believe this is the direction that games are going,” Wright said with confidence. “We want games to be more relevant to the individual. We want them to be more personal to our lives.”