The creator of SimCity is back. Will Wright has cofounded Syntertainment, a new startup that has raised $5 million from investors, including Andreessen Horowitz and former Electronic Arts chief executive John Riccitiello. 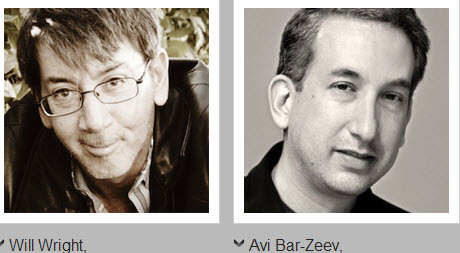 Above: Will Wright and Avi Bar-Zeev

In an exclusive interview with GamesBeat, Wright said the company will focus on the intersection of entertainment and reality.

“This is not a huge megaproject,” he said. “It is an evolution of my interests.”

He has teamed up with Silicon Valley technology veteran Avi Bar-Zeev, who is a cofounder. Both men are mum on exactly what they’re going to do. But whatever it is, it’s going to get a lot of attention.

The company will not use the same ideas that Wright talked about with his two previous startups, the Stupid Fun Club and the now shut-down Hive Mind.

The Stupid Fun Club is now a shell company that has licensed some of its projects. But Hive Mind ran into a legal dispute among founders, and Wright settled litigation related to it. For that company, Wright had advocated the idea of personal gaming, a vision that combined gaming with big data metrics about a person that could be used to personalize a game. It also focused on mobile location services.

While those startups didn’t take off, Wright is clearly a widely admired game designer. Self-educated, he reads voraciously and has been inspired by a vast array of subjects — things like architecture and science fiction — in coming up with the original and unusual designs for his games. Wright’s games have included blockbusters like SimCity, The Sims, and Spore. His works have generated over $1 billion in sales and have opened up new categories in the video game business.

Wright said the new company will not use the same idea, but it does employ a number of the team members from the Stupid Fun Club, including Wright’s wife, Anya Wright.

Bar-Zeev said in an interview with GamesBeat that he had been an admirer of Wright’s for years. He was the cofounder of Keyhole, the planet mapping application that became Google Earth. He also contributed technology to F5 Networks (an IT infrastructure company) and Linden Lab, the maker of the Second Life virtual world. He spent the last four years at Microsoft working on products associated with the Bing search engine and the Xbox group.

“I’m better on the tech side of things, while Will is creative,” Bar-Zeev said. “I’ve been an admirer of his for years. I tried to work with him at EA, but I was offered a job in a different division. So I turned it down.”

Wright started the firm at the end of last year, and Bar-Zeev joined in February. Since then, they have been designing their project and recruiting.

Riccitiello will serve as the third board member in addition to the cofounders. The company has an all-star set of investors, including the venture fund started by Netscape web-browser pioneers Marc Andreessen and Ben Horowitz.

“John [Riccitiello] and I get along great,” Wright said. “I have always had a good working relationship with him and a lot of fun.”

Andreessen Horowitz led the funding round, which may close in two parts as another new investor comes on board. The first part has closed. Other investors include the Mayfield Fund, led by managing director Tim Chang (who Wright noted is a “quantified self” expert). Another angel investor is Dennis Crowley, the chief executive of location services firm Foursquare. Max Levchin, founder of Slide (a maker of third-party apps for Facebook that Google acquired in 2010 and shut down in 2013) and HVF (a “data-focused umbrella project”), has also invested.

Wright clearly could have raised more than $5 million, but he said that the amount of money is a good match for the size of the project. The team has 11 members now, and this could grow to 20. At some point, Wright said, he could go back for more funding at a higher valuation without giving up a lot of ownership.

Wright said he had not met the partners at Andreessen Horowitz before he pitched them.

“They have been great to work with,” Wright said. “We like their view of founders.”

Asked what he learned from his previous efforts, Wright said, “The world is changing so fast in these areas. We’ve seen the rise of the app market, indie games. There are still Grand Theft Auto games and things like that around. But the rest of the market is evolving so fast. You now have to have a distribution system to go with your game.”