Editors note: This has some story spoilers.

As a movie, Until Dawn might be a forgettable horror flick. But as a video game, it’s much more interesting as an immersive and emotional experience. And it’s proof that interactive horror games don’t have to suck.

The mature-rated game is one of the sleeper exclusives on the PlayStation 4, and it’s scheduled to arrive during a summer lull on Aug. 25. I played through a deep preview of four of the game’s episodes, and I found the psychological thriller to be quite intriguing. So much so that I played it all in one sitting and felt it very hard to put down the controller. 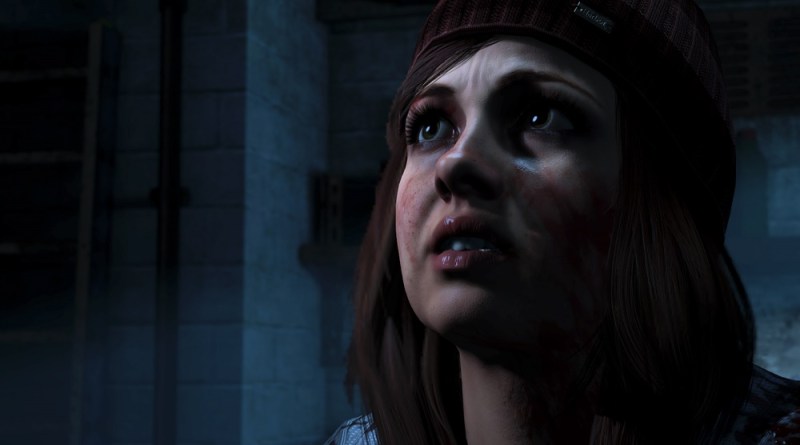 Above: Check out this character’s eyes in Until Dawn.

The title combines Hollywood actors with next-generation facial animation technology from Cubic Motion, the company whose animation tools also created the face capture of actors in games such as Call of Duty: Advanced Warfare and Ryse: Son of Rome. The acting performances come from a talented cast that includes Hayden Panettiere (Heroes, Nashville), Brett Dalton (Agents of S.H.I.E.L.D) and Rami Malek (Need for Speed, Twilight). The story was written in collaboration with famed horror writers and directors Larry Fessenden and Graham Reznick.

I immediately noticed that the characters are stunningly realistic, as if you’re looking at the real actors and actresses, rather than video game animations. Those faces are so real that you’ll stare at them and wonder if they real or animated. Several times, my family members saw me playing the game and they asked, “Is that a movie or a game?”

I caught a glimpse of one of the faces of the cockiest male character, Michael (played by Brett Dalton), with a tear dripping from one of his eyes. It made me consider just for a moment that there was something deeper behind his always-macho facade. And for the most part, the close-up animations of each person made me feel sympathy for each character, rather than the usual sense of hate because they were about do something stupid that was going to get them killed. You form an emotional bond with the character and fear for his or her safety.

Only when the characters move do you notice a slight artificiality that tells you you’re looking at an animation. That’s a testament to the power of the PlayStation 4 and Supermassive Games. It is as if the combination of Cubic Motion, 3Lateral technology, and the Killzone Engine in this title has almost gotten us across the “uncanny valley,” or the long-held idea that the more animators try to create realistic human faces, the more there’s something spooky about the image and the more it eludes their grasp. 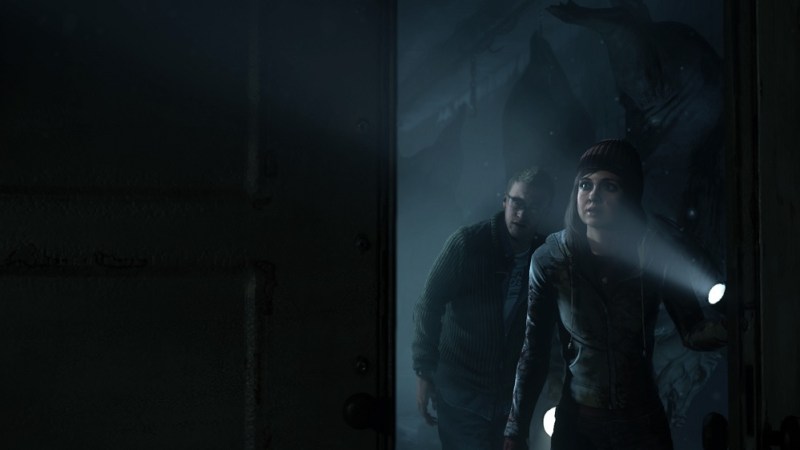 The gameplay is built around the “butterfly effect,” or the chaos theory idea that suggests a small change in a system’s initial conditions can result in huge variations in a later state. The name was coined by Edward Lorenz, and it comes from an example where the flapping of a butterfly’s wings can cause subtle changes that affect the path of a hurricane weeks later. In the game, your smallest and biggest decisions can affect the outcome of the evening and who will survive “Until Dawn.”

Sony first showed off the title two years ago as a PlayStation Move motion-sensing game. But it shelved that idea and redesigned it for the DualShock 4 motion-sensing controller for the PS4. The redesigned game resembles Heavy Rain and Beyond: Two Souls, where you press a button to make a choice at a key moment in the drama. If you make the right choice, then you go down a certain path.

You can take control of any of eight young men and women who are stuck in a secluded lodge on a mountain in the Pacific Northwest. The land has ancient tribal secrets, and there’s a killer loose who doesn’t want the guests to be there. Your goal is to survive through the night, with as many of the characters as possible, until dawn. You have to make the right snap decisions, like in the games Heavy Rain or Beyond: Two Souls — or everybody dies.

Switching characters happens regularly, as certain chapters are built around specific characters. Your early choices seem insignificant, but they define the define the relationships between the characters.

It’s not clear whether it’s a tricky “whodunit” mystery, as all of the evidence points at a Native American who considers the mountain to be sacred tribal ground. This seems a little too obvious, from the beginning of the game’s prologue on through various scenes where the killer appears to be lurking. 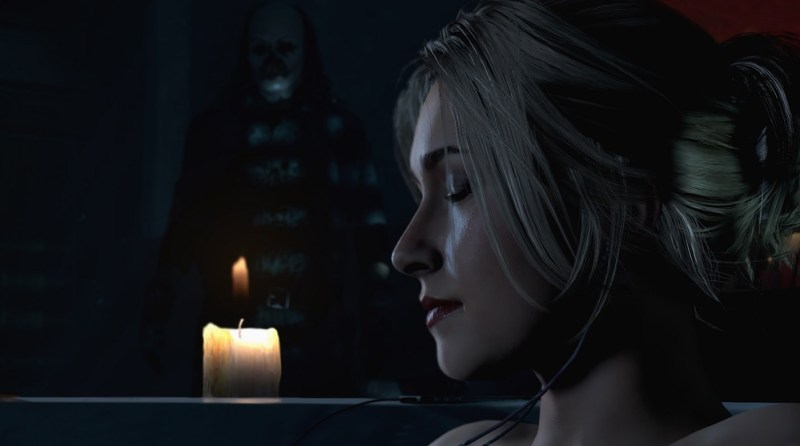 Above: Oh no, don’t take a bath. A scene from Until Dawn.

In the very first scene, the group of friends plays a poor-taste prank on one of the girls, Hannah, luring her into one of the men’s rooms at 2 am on the promise of secret tryst. But most of the friends are hiding in the room, ready to snap pictures of the unaware visitor. The victim runs off into the snow alone, followed by her twin sister, who wasn’t in on the prank.

Running off alone is of course a major no-no in a horror story, and it is one that you can’t do anything about. Your job is to do something that helps them avoid a horrible fate. The women started running off into the snow, and quickly found there was something spooky out there besides growling beasts. One of them finds a totem that signifies “death,” and you know you’re about to decide something important. You have to choose whether they should run short cuts or stay on a path. Eventually, they wind up on a cliff, trapped by their pursuer, and you have to choose which one of the girls will survive.

That initial scene sets up the real meat of the game. A year later, the brother of the missing girls brings back the friends for an evening on the mountain to help get some closure on the matter. That’s when everybody has to try to survive until dawn. 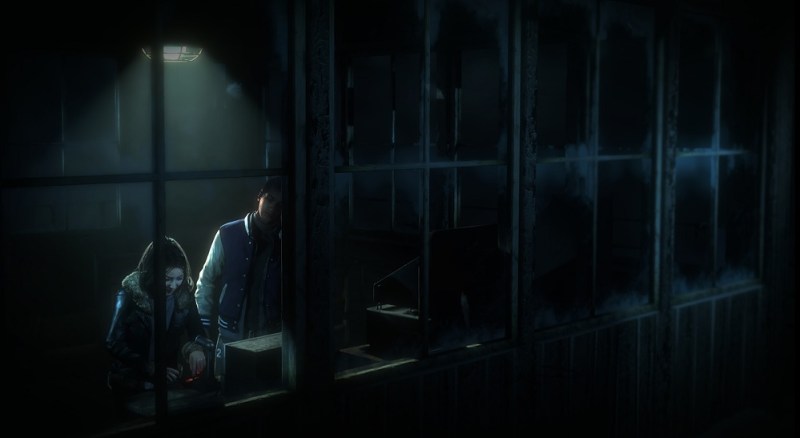 Above: The excellent mood lighting adds to the terror of Until Dawn. 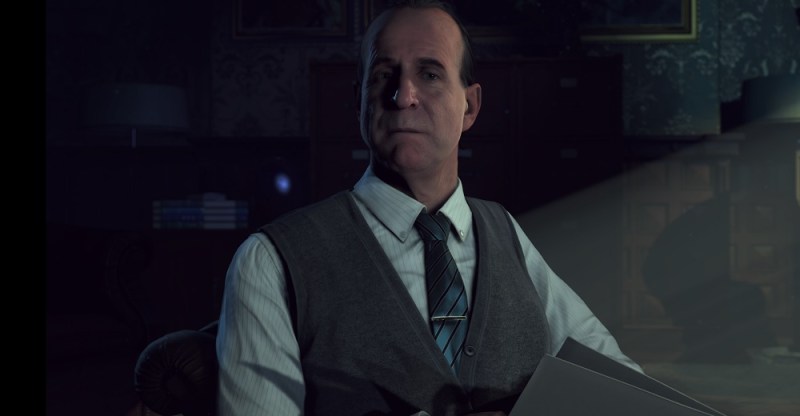 Above: Dr. Hill, the psychiatrist in Until Dawn.

This preview also revealed a seemingly professional but malevolent psychiatrist, Dr. Hill, who interviews an unseen character during one-on-one sessions in an office. In between episodes, the psychiatrist interviews the character, who is evidently the killer and is some kind of tribal protector of the secrets of the mountain. But with each new encounter, the psychiatrist asks you how you are enjoying the game, as if he is not speaking to the character but to you, the player.

That messes with your mind a bit. He also asks you questions about which character you like more, and which things make you scared. You feel the tension in Dr. Hill’s voice, and you see the sweat on his face. The answers you give affect the game. 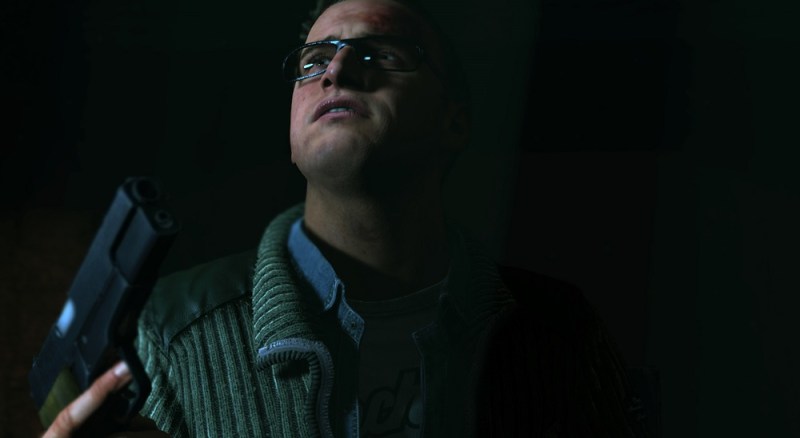 Above: Chris, one of the likable characters in Until Dawn.