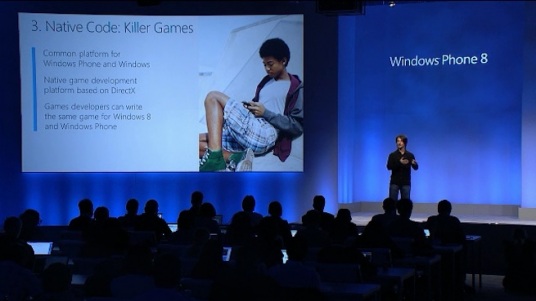 According to Microsoft, this will make it much easier for game developers to port their titles to the platform from iOS and Android while still maintaining much of their code — thus making it more enticing for developers to release content on the Windows Phone 8 platform. Also, DirectX architecture means easy porting of games from Windows 8 desktop so “games developers can write the same game for Windows 8 and Windows Phone,” a company rep said at the summit.

In addition to today’s announcements about native coding in C/C++, devs can also mix-and-match with HTML5 and C#/Visual Basic, depending on the features their games and apps will need.

One major partner for today’s launch is gaming megalith Zynga. The launch will also be supported by such parties as Autodesk, Havok, Big Fish, and Gameloft.

Currently, no phones have been released that will run Windows Phone 8; stay tuned for more hardware news in the fall.

Yesterday, the company announced the Surface, a tablet that also runs on Windows 8. No doubt there will be a degree of cross-compatibility on that front as well.