LOS ANGELES — Chris Roberts has been making space-combat simulation games for decades: Wing Commander, Privateer, Strike Commander, and Freelancer. After a diversion to Hollywood, he stormed back in 2012 with Star Citizen, a new sci-fi space combat and exploration game.

When we first wrote about Star Citizen, it was little more than a cool demo. But it used the CryEngine game engine and had beautiful 3D art. Fans flocked to it because of the ambition of the vision that Roberts had to build a full universe. Through crowdfunding, Star Citizen has raised almost $46 million from more than 400,000 fans. Now, Roberts Space Industries is showing off demos of playable space combat game, Arena Commander, where you can learn how to fight.

And the company is working on Squadron 42, a single-player campaign that will carry on the tradition of Wing Commander. Multiple games are in the works with a full-scale, linked economy across the universe.

Along the way, Roberts is keeping fans fully informed of the company’s progress, much the way he once had to do with publisher overlords. Except now, the fans are in control. Is this the new way to create triple-A games?

We caught up with Roberts at the Electronic Entertainment Expo (E3) video game tradeshow in Los Angeles. Here’s an edited transcript of our interview. 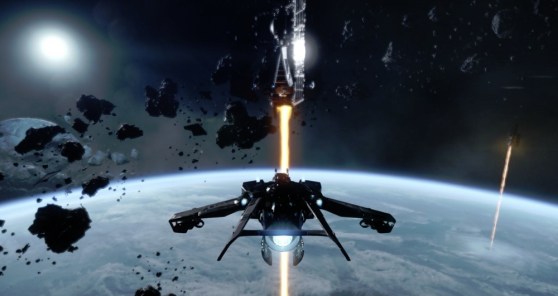 GamesBeat: How many millions have you hit altogether now?

GamesBeat: What do you think resonates so well? It just keeps on going.

Roberts: There’s an ambition to the dream that you don’t normally see. In a lot of other stuff, you’ve seen it before. It’s just higher fidelity now. In this, you can see yourself in the ships and the people, see yourself cruising the stars and stopping at a planet and getting out and shopping for stuff. A lot of people responded to that ambition.

Roberts: That’s the hangar. Last August, we released the hangar where people could walk around and look at the ships that they’d pledged for. They could get inside, but not fly yet. The whole idea with this modular approach was that we’d gradually open up pieces of functionality to all the backers, because I knew it was going to take a long time to build the game. I wanted people to be able to play something. You have this huge invested community, and you don’t just want to go away for three years and come back later on.

The idea is very much, as you build and do stuff, they can play it and give feedback and feel like they’re part of the process. That’s another thing people are responding to. They really feel like, when they join the community, they’re part of the process. Their voice can be heard in a way that it wouldn’t in a traditional publisher dynamic. In a normal beta, that’s happening maybe a month before the game comes out. You know you’re not going to be able to affect much.

Now we have the arena, where we’re going to allow you to do dogfighting. In the final game—I’m a big fan of all this in-fiction stuff. We do all these commercials for the ships as in-fiction commercials, centuries into the future. The first one we did was kind of like a BMW commercial. We just did one for the Freelancer, which is kind of like the trucker’s ship, in the style of an F-150 pickup commercial. 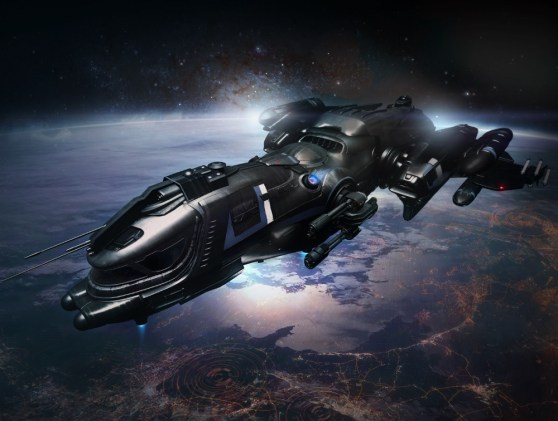 Arena Commander, the idea with that is that it’s the simulation software hooked up to your ship. You as a pilot can go in and fire that up to practice flying around, shooting, and competing against other pilots without risking losing your ship. When you fly between planets, in the real game, you can get attacked by pirates and lose your ship, lose your cargo. It’s kind of a pain in the ass. Arena Commander is the part of it that allows you to hone your skills and practice and maybe even compete against other people without the risk of learning everything.

Long-term, in the universe, we’re going to use it as a sort of eSports thing. We’ll have competitions for the best combat pilot. We’re thinking we can even broadcast that inside the universe. If you’re in a bar you can see the Arena Commander finals playing out. Of course we’d do it on the web too. It’s also allowing us to show off and demonstrate and get feedback on the space flight mechanics and balance. We can deal with issues like how our backend solution works, how many players we can get running at the same time.

You start flying around in the Aurora, which is the base ship you get, the starter ship. The initial launch of Arena Commander had three ships – the Aurora, the 300i, and the Hornet, which was more of a dogfighting ship. People that have backed on whatever level, even if their ship that they’ve backed for isn’t in Arena Commander, they’ll be able to fly the one that’s the closest. Chad’s just playing a single-player mode called Vanduul Swarm, which is like a horde mode. The Vanduul are the enemies of the human race, basically, kind of the equivalent of the Kilrathi in Wing Commander. I think there’s 15 waves of Vanduul Swarm you can go against.

In the longer term, this week we start the multiplayer testing. We’re slowly opening that up. We have a unique challenge, in that we’re letting people get early access, but our numbers are so huge. There’s more than 250,000 people who qualify. It’s not a small release. It’s almost like releasing a full game. You have to deal with the scaling. We delivered I don’t know how many petabytes of data already just for this patch. The Arena Commander patch was 11 gigs, and we’ve had 150,000 installs already. It’s challenging, the building-out process, but it’s fun. It’s allowing us to get really useful community feedback early enough that we can change things and make things better. 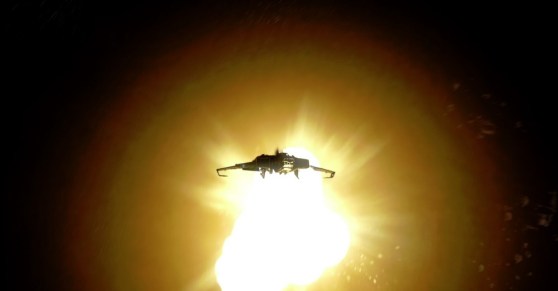 Roberts: Exactly. I knew Star Citizen was such a big vision, especially once we started to get the funding and all the different features, that I didn’t want to spend two or three years before people could interact and play. We’re in the age of community. I don’t look at this as a game someone plays for a week and then they’ll be done. You need to have them interacting and doing stuff so they can see the progress, see that the game is moving forward, see that they have an opportunity to give feedback.

It does present some challenges, because not everyone is aware of the development process. They expect it should all work perfectly and be neatly balanced. No, that’s why we’re giving it to you early, so you can give us feedback on it. The majority of our backers, though, understand.

GamesBeat: I talked to Ultima creator Richard Garriott, who also went the crowdfunding route with his new RPG Shroud of the Avatar, just now. He mentioned that he used to have to communicate a lot more with publishers. He’d have all these internal meetings and write all this stuff about where the game was, and then nobody would read it.

Roberts: Yeah. The backers read that stuff. People always ask what it’s like having 400,000-some bosses. My answer is mostly, in the old way of doing it, you always had people you had to tell what you were doing. But I feel that in this case, there’s a lot of people, but they’ve got money down on this game. They love this game so much that they were willing to pay for it long before they can play it. They’re invested parties.

A lot of times, in the old publishing model, I used to get frustrated when you’d be dealing with a marketing executive that didn’t really care about the game. They would come at it from, “Oh, I saw this game sold so many copies and it has this feature, so you should have it too.” I’d say, “That feature doesn’t make any sense for our game.” “Well, you need to have it, or we’ll have to put your sales forecast down and cut your budget.” You’d end up compromising stuff in your game to make sales and marketing happy. In this case, we don’t have to. We make the game that we think the community wants, and we get community feedback on it. It’s a fun process.