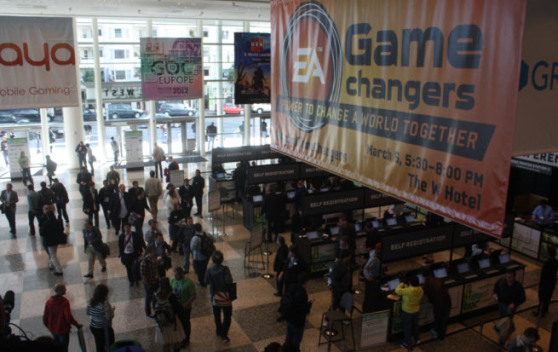 The Game Developers Conference will be a big one this year, with talks on the PlayStation 4 and all of the disruptive forces that are trying to unseat the consoles. More than 23,000 attendees are expected to make the pilgrimage to San Francisco’s Moscone Convention Center from March 25 to March 29, or slightly more than last year’s 22,500.

The event is the biggest for the games industry in the U.S., next to the Electronic Entertainment Expo (E3) in Los Angeles in June, and so it is a bellwether for the trends in gaming.

The scheduled sessions mark the changes that have happened across the games industry in recent years. For instance, the Serious Games Summit is no more, but the conference has added summits on free-to-play games (replacing the earlier social and mobile-gaming summits), game narratives, and quality assurance. Those summits join others on indie games, smartphone and tablet games, artificial intelligence, localization, and education.

Meggan Scavio, the general manager of GDC Events, told GamesBeat that the board decided not to stage a keynote talk this year largely because it takes the whole crowd away from other sessions. On top of that, no relevant keynote was proposed that made sense for the whole audience.

But the GDC accepted some last-minute sessions from Sony, which plans to describe the recently announced PlayStation 4 video game console in more detail. Much of the content will reflect the shift toward indies, who account for 46 percent of developers in the U.S.

Simon Carless, the executive vice president at UMB Tech Game Network, the owner of the GDC, told GamesBeat, “There are still plenty of marquee games people care about, but there is also a lot more movement into smaller development studios. That is what we are trying to capture with the programming.”

Nintendo will describe how to make Wii U apps with high-level game tools.

The conference will have more than 400 lectures, panels, and roundtables. And it will have more than 300 exhibitors. Also returning this year at the GDC: the 15th annual Independent Games Festival, the 13th annual Game Developers Choice Awards (hosted by Tim Schafer of Double Fine Productions), and classic game postmortems on titles such as Crystal Castles, Myst, Pinball Construction Set, and X-COM: UFO Defense. The talks include an advocacy track about issues such as women in games and health/quality of life issues.