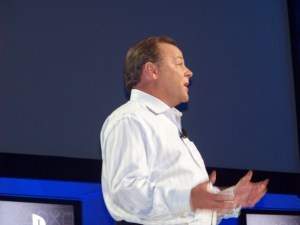 Updated twice: Finally, we’ve got ourselves a console war. Sony has been stuck in third place for a while. But today at its E3 press conference in Los Angeles, the company said it would shave $100 off the cost of its most expensive PlayStation 3 model.

The move goes further than Microsoft’s $50 price cut on Sunday for the Xbox 360. That move was viewed more as a clearance model, as Microsoft moved to eliminate its inventory of 20-gigabyte Xbox 360 machines and replace them with a $349 60GB model.

Sony, on the other hand, is eliminating its 40GB $399 PS 3 model entirely. The 80GB version which was $499 will now cost $399. Microsoft now has the most expensive box on the market, with the Xbox 360 Elite with a 120GB hard drive now costing $449. Microsoft will likely have to cut prices in reaction or lose market share.

While Microsoft was simply engaging in its usual product evolution, Sony’s move is an aggressive attempt to regain lost market share. It has been years since Sony did something similar. In fact, Sony cut $100 off the price of the PS 2 back in 2002, when Microsoft’s Xbox was launching for the first time. Typically, console prices come down about $50 a year. Each time when that happens, demand picks up as more people can afford the consoles. While game sales have been strong all year, Sony may have taken the weak economy into account in deciding to make a drastic price cut.

Jack Tretton, (pictured above) president of the U.S. game unit of Sony, said that consumers had been gravitating toward the 80GB model anyway since they can use it to store more games, videos, movies and music.

The Sony move shows the company is still a player in the three-way battle with Microsoft and Nintendo. And it should answer critics who say that the prices for consoles have been too high for too long. Sony also showed off a number of big games aimed at both mainstream gamers and hardcore players.

Little Big Planet is a cute game with rag dolls who solve puzzles in a side-to-side movement. The game has been hailed as innovative for its use of realistic 3-D and old fashioned game play, as well as the ability to inject user-generated content. It launches in October.

Sony also showed off Resistance 2, a sequel to Resistance Fall of Man, the big seller that helped launch the PS 3 in 2006. It also showed off big investments in large online games. Massive Action Game, or MAG, will be a realistic shooting game from Zipper Interactive that has as many as 256 players fighting online in the same battle at the same time. Big games such as Call of Duty 4 only have 18 players online, while Resistance 2 will have 60 players online. Sony also said it is working on God of War III for the PS 3, but didn’t say when it would debut.

Sony Online Entertainment has also been working on DC Universe Online, a comic book hero game, for three years. The game is a virtual world known as a massively multiplayer online game where thousands can log in to a persistent world and act out their superhero fantasies as “Batman” or “Superman.”

In other developments, Sony said that its “Home” virtual world is making progress for a launch this fall. Sony will also launch an online news operation, dubbed “Life With PlayStation,” on the PlayStation Network for the PS 3. It will give real-time news updates, weather and gamer news. Tretton said that 2008 is the year of the PS 3. With a new price cut, Sony at least has a chance of making that happen. But it still has to deal with the dominance of the $249 Nintendo Wii and Nintendo’s big advantage in the handheld market with the DS.

Update: I haven’t had a chance to follow up with Sony yet. But in response, Microsoft executive John Schappert said that he doesn’t consider this a real price cut by Sony, since their $499 unit wasn’t selling. That doesn’t make too much sense to me. I think it is a real cut. But he brings up a good point. How soon will the 80GB units be available at that price of $399, and what will Sony do with all of the 40 GB units in inventory? Don Mattrick, head of Microsoft’s game unit, said briefly to me that it takes about a week to figure out Sony’s price cuts, no matter what they do.