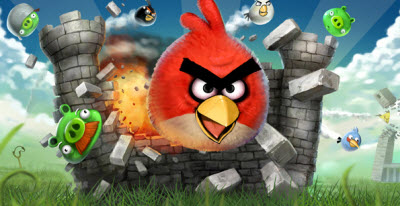 Apple has released a list of the top-selling apps of 2010 across its iTunes store, with the hit game Angry Birds topping the list of paid apps.

The victory for Angry Birds shows that games continue to be the most compelling paid content on the App Store. That game has become such a cultural phenomenon — all of the kids in my immediate family were playing it obsessively at Thanksgiving — that it has probably done a lot to draw attention to the iPhone as a game platform. Just like any other platform, Apple needs a Killer App to sell its iPhones and other devices. Angry Birds is as close to that as anything.

Apple does not provide the actual sales numbers, but Rovio, the maker of Angry Birds said it has sold more than 12 million paid copies of Angry Birds. With free downloads, Angry Birds has surpassed 30 million to date. In the game, green pigs steal the eggs of the birds, who get angry and use a sling shot to launch themselves into the fortresses of the pigs.

For songs, consumers bought Hey Soul Sister by Train the most. That was followed by Katy Perry’s California Gurls, Eminem’s Love the Way You Lie, B.O.B.’s Airplanes, and Taio Cruz’s Dynamite. For album’s Eminem’s Recovery was No. 1, followed by Kesha’s Animal and Lady Gaga’s The Fame.

For TV shows, Apple said that Glee: The Power of Madonna was the top-selling episode. That was followed by the finale of Lost and iCarly: iSave Your Life Special Extended Edition. The fourth season of Mad Men was the most popular series on iTunes, followed by Glee season 2, Doctor Who season 5, Dexter season 4, and Futurama season 7.