Chou: Yeah, it’s the main part of their digital business. We take free-to-play for granted sometimes, but it’s going to be the model for the future. Really, there’s not that many companies who are really good at free-to-play. Certainly the traditional game companies are still learning. That’s an area where Kabam… That’s our bread and butter, our core competency. Designing free-to-play games. Strategy and now MMORPGs. That’s a key part of where gaming is going, the whole industry, is free-to-play. Not just digital, but the free-to-play business model. What we embrace is a true multiplatform approach. I think we’re the only company in the space that has a diversification of platforms the way that we do. No single platform is over 30 percent of our revenue at this point. Our original platform, Facebook, is less than 30 percent already. Each platform that we launch on, with Kabam.com, Steam, Kongregate, iOS, Android, Amazon… We’re really excited with this ability to connect with consumers across a multitude of platforms. That’s something that’s really different. We’re leading the market in how we do that. 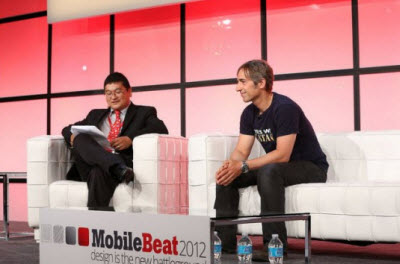 GamesBeat: And your object is finding the hardcore gamers on whatever platform they’re on.

Chou: Exactly. Some of these hardcore gamers have played on Facebook. We, as well as a few other companies, have been successful there. We started finding hardcore gamers on iOS when people were still talking about mobile being a more casual experience than Facebook. We’ve proven that wrong as a company. We’re going to do it for Android and tablets going forward. Our focus is that core gamer segment. Core gamers and free-to-play… That segment of gaming is growing very rapidly. Whether you’re talking about casual or DLC or social or other areas, there are some challenges in those other areas.

GamesBeat: Some companies have said that they hadn’t quite figured out mobile yet… Mark Pincus said at our conference that he’s still looking for some kind of triggered event, so they can do something like investing more than a couple million… Maybe invest $10 million in a game and expect to get back a return of $15 million on a consistent basis. Get to 10 million users in 90 days or whatever like they can do on Facebook. So there’s that line of thinking, that something still has to happen to make mobile a real game market. The opposite of that was Naoki Aoyagi at Gree, who was saying that within 18 months, this whole market share battle in mobile is going to be over. Which means that they’re spending all this money right now to try to race into mobile as fast as possible. What do you think of those two positions?

Chou: I have a third view, which is… Consumers are playing games on any internet-connected device. Mobile, over time, is going to be an artificial delineation. More and more people these days have laptops or tablets that are 3G- and 4G-connected. I really think about it as a multiplatform approach to any internet-connected device. If you’re just talking about iOS, yes, the market share… I would probably agree more with Naoki that the market share battle is not going to be five years long. It’ll be two years. I think over the next four years, whether it’s what Ouya is doing in the living room with bringing an open-source Android box in… Or, more importantly, what Apple and Google are doing in the living room. Or what Samsung and some other companies are doing.

The living room is going to be another battleground for free-to-play games. And, of course, the next generation of consoles. My prediction is that the next generation of consoles is going to enable free-to-play. It’s just too big for the console guys to ignore. You’re going to have Google and Apple with smart connected devices that can enable gameplay. The console guys, Microsoft and Sony and Nintendo, battling for the living room as well. And maybe a startup like Ouya doing some exciting stuff. The marketplace continues to evolve. Saying that the battleground is going to be on just the one hill is focusing too much on the battle and not looking at the war. It’s really the transition of gaming from physical retail packaged goods to free-to-play across internet-connected devices. That’s where Kabam is headed as a company. 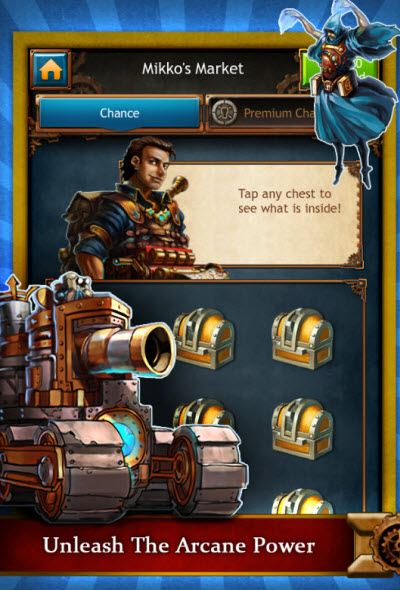 GamesBeat: As far as the timing goes in these different platforms and how much you invest in each one of them right now… I suppose you don’t quite yet have a universal development platform that gets you everywhere.

Chou: We’re getting to that point. Kabam’s strength is in cross-platform. Not just development but in operations. These games are run as a service now. Once players get to a certain point in the game, unless you’re delivering them new, exciting content that’s really different, they’re going to go elsewhere and find new games to play. It’s not just developing cross-platform. It’s running games on a cross-platform basis. That’s an area where Kabam and our technology is so far ahead of everyone else in the marketplace

GamesBeat: What do you find as far as how many people you need to assign to a game, when it’s in development and after it launches?

Chou: Generally speaking, we assign somewhere between 50 percent to 100 percent more people after a game launches. We have a unique, strong way of having core teams develop the basic gameplay, then we have smaller teams within that team that are developing new content. Plus another team fixing bugs and maintaining the game.

GamesBeat: Is there a number of people on an average project?

GamesBeat: So it’s not quite getting up towards the triple-A games, where there are 100, 200 people.

Chou: No. On Facebook, as Facebook rapidly matured as a platform, the fidelity of the games increased dramatically, so you had to be able to compete against… You look at The Ville and some of the latest Zynga games, the level of polish and fidelity is just fantastic. On mobile, because of the platforms we’re able to use… Unity we’re really excited about, for example. We’re able to do 3D, we’re able to do a lot of really interesting stuff in a way that we couldn’t do on the web. The mobile development costs are actually lower than the web these days, and the fidelity can be as good, because of some of the technology that we’ve developed as well as what’s available in the marketplace. And, just as important, the computing power of these devices.

GamesBeat: It seems like it might get a little problematic if your teams become 100 people. Mark Pincus did mention that he had more than 100 people on CityVille this spring. That was well after launch.

Chou: Probably similar to Zynga, or any other gaming company really, our team size is pretty variable. When I talk about 30 being on a team, that’s really our largest team, and then we have a lot of smaller teams.

GamesBeat: Even though you are heading towards more fidelity, then, maybe there’s some efficiency here that’s stopping you from going to the full console-like teams?

Chou: I just think consumers aren’t quite looking for that yet. If you think about the tablets, the laptops, the phones, and the people who play these games on them… Developing a console-quality game, the user can’t really enjoy it anyway. It’s not that full 60-inch experience. Epic has done a great job pushing the fidelity with Infinity Blade and so forth. But I think… Don’t get me wrong, I’m a big fan. I think what they have done is incredible. But I don’t really get as much out of it as if I was sitting in the living room. It’s a very different experience from what I’m looking for on my phone. Fidelity is very important, but it’s not about creating the same level of fidelity I can get on my big-screen TV. That’s the wrong approach for a lot of free-to-play gaming companies. Going back to the gameplay… The gameplay is the most important thing. Especially for game companies that are just getting into free-to-play for the first time. Focusing on getting the gameplay right, over fidelity, is going to be the right approach.

GamesBeat: Torsten [Reil] at NaturalMotion, he was saying that he thinks there will be a shift from 2D to 3D. That’s kind of already happening. Their CSR Racing game is evidence of that. It almost seems like an ideal digital company these days might have a foot in 3D, in strategy, and in casual games. Especially something like social or casino games… [big laughs] That might cover all the bases. What’s your thinking about that kind of company?

Chou: Going back to certain types of genres… Fidelity is arguably more important in some than others. Racing is a great one. You talk about some of the great racing games like Gran Turismo, Need for Speed… The fidelity of those games is amazing. That’s part of the experience, and I think CSR did a great job of creating a category-leading racing game. I do think, overall, across all genres, fidelity is becoming more important. I just think a lot of companies, especially guys with triple-A backgrounds, they focus on that to the exclusion of creating a really great game. That’s disappointing.