Game awards shows have been singularly bad because the hosts are celebrities who don’t play games and proceed to make fun of gaming all night long at events that are the equivalent of the Oscars. 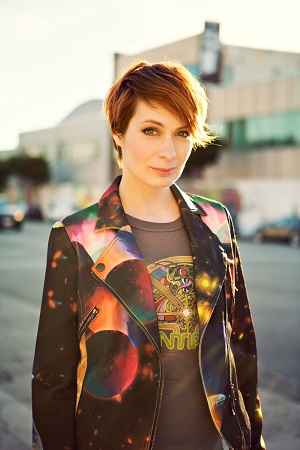 But the game industry has finally wised up and named two co-hosts, Felicia Day and Freddie Wong, who are gamers at heart and, while they will likely take plenty of jabs at developers, won’t be viewed as foreign interlopers.

The Academy of Interactive Arts & Sciences (AIAS) announced that Day, a game-focused actress and producer, and Wong, a filmmaker and competitive gamer, will “proudly wear their geek badges with honor” as co-hosts of the 17th annual D.I.C.E. Awards on Feb. 6 at the Hard Rock Las Vegas Hotel.

“I’m thrilled to be hosting the D.I.C.E. Awards this year with Freddie Wong,” said Day. “I presented in 2012 and got a really cool T-shirt, so who knows what I’ll bring home this year. Maybe [Gearbox Software CEO] Randy Pitchford in a suitcase.”

“I’ve been practicing reading off a homemade teleprompter with the goal of not embarrassing myself in a room full of nerds,” said Wong. “I’m excited to co-host with Felicia and hope my two days of self-imposed hosting practice will pay off.”

The awards have been controversial in the past because of the raunchy and superior attitudes of the comics who have previously hosted, like Chris Hardwick and Jay Mohr. But the clincher in that respect was Joel McHale, who co-hosted the recent widely criticized VGX Awards show with game TV personality Geoff Keighley. McHale was so clueless and disrespectful toward game developers that the fans turned against him. Some viewers felt he brought a refreshing irreverence to a stuffy awards program, but others felt he did nothing but belittle gaming.

Given that background, the choice of Day and Wong is clearly a step in the safer direction. Day is co-founder of the digital entertainment network Geek & Sundry. She created and starred in the hit web series The Guild, which is about a member of a guild in a fantasy role-playing game. She went on to be an actress in the CW show Supernatural and is completing a two-season role in the SyFy series Eureka. Her YouTube channel has 75 million views.

Wong is a pioneer in online video about gamer culture with his YouTube channel, FreddieW. He has created some of the funniest, most viral video satires about games. His channel has had over 900 million views since its inception in April 2010. Video Game High School, his web series, gained over 50 million cumulative views over 12 15-minute episodes in 2012.

“The D.I.C.E. week is about the new golden age, and Felicia and Freddie’s respective work very much reflects this theme as they have become true trailblazers in the expanding world of web-based video,” said Martin Rae, the president of the Academy of Interactive Arts & Sciences. “They are a perfect fit for the stage as they are gamers at heart who will not only entertain but also celebrate and honor our industry’s gamemakers and creative visionaries. “Twitch has been a fantastic partner, and we are looking forward to reengaging with their audience to share the stellar sessions and Awards show that have defined our organization.”

In response to our comparison, Rae wrote us the following email.

“The Academy has put forth great effort to partner with hosts and writers who honor our Awards in a celebratory and respectful manner; at the same time their humor helps lighten the mood. The Academy makes a conscious effort to select hosts who are gamers, and Chris Hardwick and Jay Mohr are no exception, and we were pleased to have had them as an integral part of our Awards Show.  Chris is an avid gamer who has built an entire empire around geek culture, and Jay is a big fan of games with a wicked wit.  I’m happy to have them in my game room any time.”

We’ll acknowledge that there’s a big difference between the game-savvy comedians Chris Hardwick and Jay Mohr, and the not-so-savvy Joel McHale. But we’ll note that “roasting” the game industry has been a big tradition at past shows by hosts who look at the industry from the outside in. These hosts will be able to do the same no doubt, but from the inside.

Twitch, the gamer livestreaming service, will livestream the DICE Summit, the elite game conference sponsored by the AIAS, and the D.I.C.E. Awards as well.