Perhaps the simplest way of providing positive feedback to players, increasing numbers form the foundation of many different games, and with good reason. It’s the easiest way to show players they’re improving in a quantifiable manner, but more than that, seeing bigger numbers just sets something off in our brains, that we’re doing something right. Real-time strategy games may let you bandy about huge blobs of units in attempt to overcome the other player’s blobs, but what you’re really doing is trying to make your numbers go up faster than the opponents, whether it be resources or units.

Blob management can get in the way of the fun with numbers, though, thanks to how much of the map you need to pay attention to. Your attention is almost always divided between your home base and your units, which means bouncing back and forth across the map, diminishing the time and mental space for you to come up with a plan. While this isn’t necessarily a bad thing, it does result in a game that’s somewhat harder to get into.

That’s what makes Offworld Trading Company, from strategy game phenom Soren Johnson’s Mohawk Games, such an enticing proposition. As an RTS focused entirely on manipulating resource gathering and economic supremacy, Offworld Trading Company centers itself on the obvious thrill of making your numbers get bigger while trimming distracting elements like units. It’s just a shame that it so rigidly and slavishly stays focused on that center, artfully dodging any potentially interesting variations on its brilliant core. 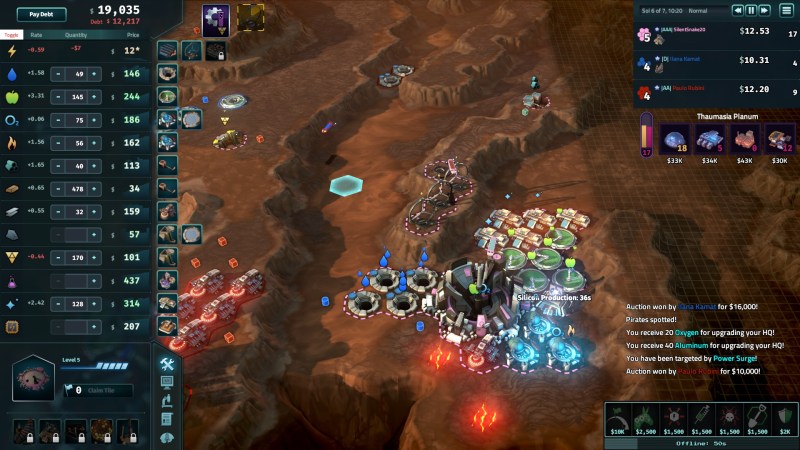 Above: Behold, your budding operation at work.

In Offworld Trading Company, money is what you want, and you want a lot of it. Because of the focus on capitalism — you play as a corporation trying to monopolize colony business from rival corporations – all you need to worry about is your resources and how they’re working toward making you rich. This means the usual practice of constructing buildings that will produce a specific resource, which in turn will let you build other structures and gain access to other resources.

The genius of Offworld’s central gameplay hook is how easy it is to buy and sell resources at will. The left side of the screen lists all the resources available, their market value, and buttons that let you buy and sell them instantly. It also displays their market value, which fluctuates, giving you immediate goals to pursue that at the same time aren’t set in stone. All you need to worry about is profit, and it doesn’t matter how you get there. And the immediacy of buying and selling means you get instant gratification from your money makers or necessary resources that you lack when building. You find little friction in manipulating resources, and that’s a good thing.

In most RTS games, a match’s progression is predictable: You build up your resources and then let your forces loose on the enemy. Games then ebb and flow between skirmishing and making reinforcements in equal measure. In Offworld Trading Company, you feel like you’re building to something more.

In the beginning, you scan the shrouded map for resources, informing your decision on where to put your base. Then you use your starting resources and money to start constructing building that will produce what you need to start being self-sufficient. You eventually transition to producing goods that will net you a fat profit based on the current state of the market, which you’ll use to keep upgrading your base of operations with buildings that can manipulate the market or let you research specialized technology. Pretty soon, you’ll have enough to build an Offworld Market, which lets you send goods to other planets for even bigger returns, bridging the gap to you being able to buy out your competitors. From start to finish, each game plays out like a mini-narrative chronicling your rise to a successful operation, constantly building from the minute you touch down on the planet.

In another brilliant stroke, Offworld Trading Company lets you accrue debt, which sounds like a bad thing. But this makes sure that you can never get stuck. It takes resources to maintain your base, so should you run out of surplus food, fuel, oxygen, or water, and it automatically pays the difference for you. Also, when auctions periodically pop up, offering advantages to the highest bidder, you don’t actually have to use the money you bid if you win if you don’t have it. It instead gets put onto your debt, which can be paid off later – interest does still accrue, however. And the bigger your debt, the lower your stock price, which determines how much money it takes for an opponent to buy you out. Unlike many RTS games, if you grossly underestimate how many essential resources your operation needs, you don’t immediately lose, instead building debt that will have a negative effect on the late game. And you can recover from the red ink as well.

Debt is what allows players to make mistakes, and that’s fantastic.

An economy-focused game like Offworld with no combat threatens to make for a dull time for all but the most stalwart strategy players, and yet it doesn’t thanks to the fact that it all takes place in real time. As you scan for a good place to plant your headquarters, you’re racing other corporations as they try to stake their claim at the same time. Once you’re established, you rush to take advantage of in-demand markets to make the highest profit.

The beauty of this is that you don’t have to worry about ordering units around. Concentrating on optimizing your resources and profit is just as gratifying and way more manageable, racing to make it to your endgame before your opponents. And when you finally do make enough money to start buying stock in your competitors, the sound effect that plays when you hit the Buy button becomes one of the sweetest sounds in gaming. It’s quite a rush, something I never thought I would be saying about an economic strategy game. 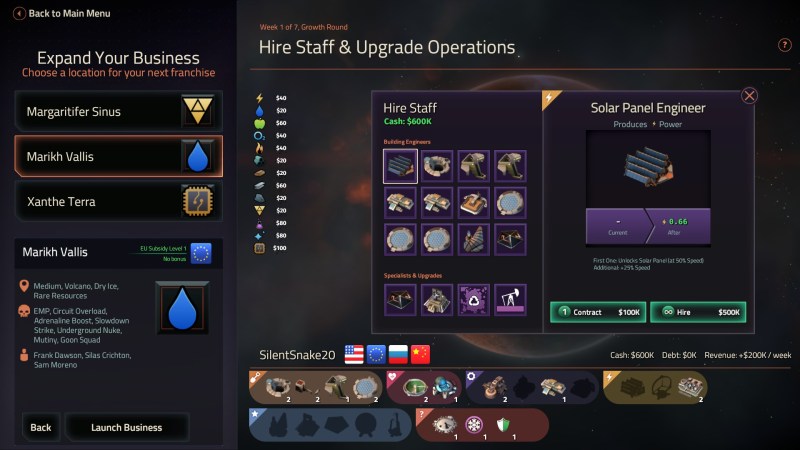 Above: Campaign mode lets you spend all that money you made between each round.

For how revolutionary the mechanics themselves are, Offworld Trading Company can be a touch monotonous. Auctions and map layouts are determined by the game, but most everything else is player-driven. And though the Black Market lets you mess with your competition, it offers little friction between you and your gameplan. Here, though, it works to Offworld’s detriment, making for a largely similar game experience each time.

In a similar vein, the modes are great and varied in theory — single-player campaign, competitive and team skirmish options, and daily challenges — all feel similar and capture the core gameplay to the point where it’s treated as sacred. The single-player campaign is punctuated with the most twists — keeping an amount of money between matches in order to permanently buy or temporarily hire starting buildings, but the entire affair is, again, dry and flat, treated as nothing more than a glorified skirmish.

Offworld is more adversarial than you’d think for a game with no combat, but for the most part, the best offense is executing your game plan as quickly and efficiently as possible. The Black Market exists largely to allow you to attack your opponents’ progress by sending bad effects their way or clogging their resources, but it feels more like an afterthought to keep it from being too uninteractive and isolated. In reality, most of the angles of attack feel too similar to each other, as they almost always amount to disrupting your opponents’ flow of resources in some way or another.

I wish there was more interesting options for interacting with your opponents, and the ones that are there feel too militarized — a lot of the effects feel like faux air strikes — for a game about corporate takeovers.

Offworld Trading Company is a flat-out revolutionary design that brings out the inherent fun of resource management that’s always been lurking underneath the surface of RTS games. There comes a moment during every game where all your plans converge on an explosive moment where you go off and you know that you’re about to win from all the piles of money you’re making, forming one of the most memorable game feelings I’ve experienced in 2016.

Mohawk Games really hit on something special in creating the heart and soul of what makes Offworld Trading Company tick. It’s just a shame they didn’t stretch and twist it far enough to broach the limits of what this brilliant idea can really do.

Offworld Trading Company is out now for the PC and Mac. The publisher sent GamesBeat a digital code for the purposes of our review.