It took me 55 days, but I finally have the Prince. One of the most powerful characters in Supercell’s Clash Royale is very hard to earn without paying real money in the free-to-play mobile game. But after getting lucky and patiently biding my time, I was finally able to secure the slippery card. 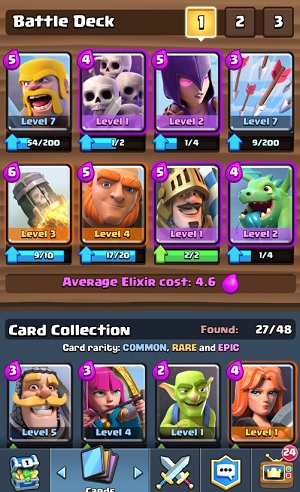 Above: My Clash Royale deck now includes the deadly Prince.

Most people aren’t this patient, and that’s why Clash Royale has been among the biggest revenue generators in mobile gaming history. The title from Helsinki-based Supercell is No. 3 on the top-grossing games list in the U.S., behind MZ’s Game of War: Fire Age and Mobile Strike. Clash Royale topped the mobile game revenue charts with $133 million in revenue in March, according to market researcher SuperData Research.

On a worldwide basis, Clash Royale was the No. 1 mobile game in the world in the month of March, according to SuperData. Supercell also has the No. 2 mobile game in Clash of Clans, giving the company a combined revenue of $251 million in the month of March. SuperData estimates that the $32.8 billion mobile market will grow 10 percent from 2016 to 2017.

But Supercell doesn’t have any of my cash because I am smart, patient, and cheap. I am Supercell’s worst nightmare, and it would be a worrisome thing if all gamers were like me. I’m like the guy who doesn’t pay his taxes to the king in a completely voluntary tax collection system.

In Clash Royale, two human players battle each other in real time. Your goal is to take out your enemy’s three castles while protecting your own. There are two paths to the enemy. You have a set of four cards to choose from at any one time. If you have enough points, you can play a card. The points are regenerated at an even rate for both sides. It takes some time for each card to play out, and so timing and card selection are key. If you play the right card, you can overwhelm the enemy and push toward a castle and then destroy it. If you take out the enemy’s main castle, you win the game. 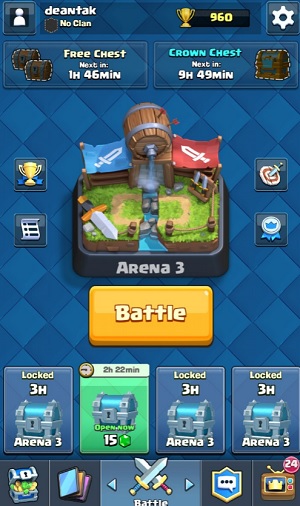 Over two months of play, I earned most of the cards that I needed to counter the enemy’s moves and gain an advantage.

But the Prince was elusive. The Prince looks harmless, but he does double damage when he is allowed to charge unobstructed at a castle. I had to deal with sneak attacks from the enemy’s Prince card when I was busy attacking down one of the lanes. When I was spending all of my points to attack one castle, the enemy’s Prince would go down the other lane and heavily damage my castle. When that happened, I was inevitably beaten into submission.

But yesterday, I was able to nab the Prince by spending the rewards that I earned during the many battles I fought over the prior two months. (I realize I’m exaggerating the importance of the Prince, who can be countered. And I am minimizing the value of other cards like the Dark Prince, etc. But let’s just do this for the sake of argument).

That tells you that, as clever as Supercell’s monetization scheme is, you can get around it if you are a really cheap player. Now, I’m not against spending money in a game. But I did this to prove a point.

With Clash Royale, you can always play. This is a really smart design because it balances the need to monetize the game (from those people who don’t mind paying in order to beat other players or climb through the rankings more quickly) against the need for retention, or keeping players playing the game. (This topic, by the way, will be the subject of a roundtable led by IronSource chief revenue officer Gil Shoham at our GamesBeat Summit 2016 event next week.)

When you play, you can get a reward of a chest of surprises. The chest occasionally has a rare item in it, and that’s how I collected almost everything except the Prince. But there are only four slots for chests that you can have at any one time. The chests take anywhere from three hours to eight hours to unlock. Giant chests take 12 hours and magical and super magical chests each take 24 hours. So if you have been playing a lot, you’ll have some victories, win some chests, and then fill up those slots.

If you want, you can use gems to open up the chests early. You can slowly earn the gems, or you can just buy them with real money. Clearly, a lot of people are impatient, and they want to make progress. So they cave in and spend money on gems to unlock their chests. This is understandable, but it is by no means required.

You can also earn a hefty gold chest if you destroy 10 enemy castles in combat. (If you destroy too many castles too quickly, there’s a timer put on the ability to regenerate this chest.) And you earn a free chest if you return to the game every so often. In these ways, you can continue to earn chests even if you have filled up all four slots.

Gradually, if you play addictively, you’ll run out of ways to earn chests. You can still play, but you won’t earn new rewards, and you’ll feel like you are stagnating. Again, most payers may give in at this point and start spending money. I hit this threshold many times, but I kept playing without paying.

But by not spending, I did pay a price. I stagnated at around 900 trophy points. Those trophy points determine how quickly you can advance into the next arenas, where tougher players await you. If you win a match, you earn trophy points. If you lose one, you lose trophy points. So if you keep losing matches in the harder arenas, you’re knocked back down to the lower arenas.

That can be very discouraging. But so far, I’ve been winning a few and losing a few. That may make it feel like I’m not making progress, but I’m OK with that as long as Supercell doesn’t stop me from playing.

Now, I do wonder how many other players are like me. If a lot of non-paying people are earning the Prince right about now, then they will lose their motivation to pay. That’s what has happened with me. Now that I have the Prince, I’m going to attack other players aggressively and win some more. I have no urge to buy anything.

Supercell can change these dynamics by creating new characters and new items to buy or earn. But for now, victory is mine. Well, sort of. Supercell did manage to produce an awesome game that has held my attention for the past 55 days.