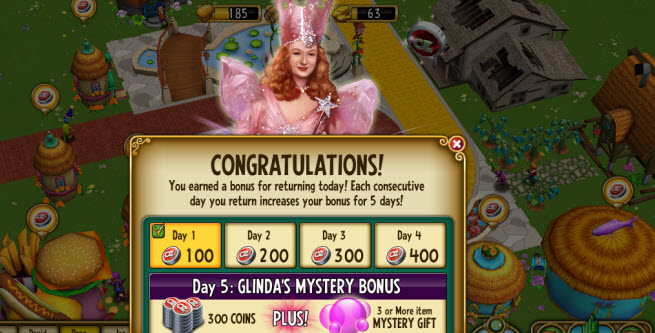 Dorothy isn’t in Kansas anymore. She’s on Facebook. Developer Spooky Cool Labs is announcing that its Wizard of Oz game has more than a million registered players on the social network. That shows that it has enough traction to keep building its audience and updating the game. 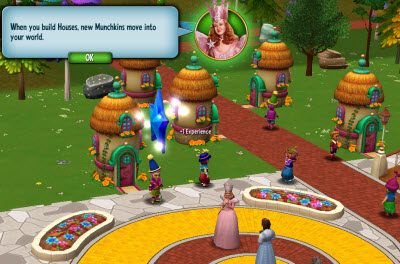 “We jumped into social games head first, and we’re having a lot of fun doing it,” said Bob Holtzman, director of marketing at Spooky Cool Labs, in an interview with GamesBeat.

Chicago-based Spooky Cool Labs and Warner Bros. Interactive Entertainment launched The Wizard of Oz on Facebook in November as a social game based on the beloved film.

In the game, you can take a trip down the Yellow Brick World along with Dorothy and Toto — as long as you build the road first. That’s because Wizard of Oz is a city-building game with 3D graphics and voice-over narration. The good witch Glinda shows you how to maneuver and build a better Munchkintown. The game features music from the film, video clips, and animated likenesses for characters. You can spin the world to see it from different 3D perspectives or look at a top-down view.

The Wizard of Oz is an enormously valuable license, and it’s about to go through another revival with the launch of Disney’s Oz: The Great and Powerful film. The 75th anniversary of the original movie is coming up, too, during the summer, and that will create more marketing activity for the game. Warner Bros. has already run a several promotions for the Facebook game and will do more in the future.

“It’s a great time for the Wizard of Oz,” Holtzman said.

Warner Bros. gave the license to the original movie to Spooky Cool Labs because it was founded by well-known game designers, Joe Kaminkow and Larry DeMar, who have both created some of the most popular games in arcade, pinball, and slots.

Kaminkow said in an interview with GamesBeat that he has taken a job as senior vice president of game development at Aristocrat Leisure, an online gambling company that recently acquired the Product Madness social casino game. Kaminkow will remain chief executive of Spooky Cool Labs, where he will do less day-to-day work. Meanwhile, Brian Eddy, formerly chief creative officer, will become president of Spooky Cool Labs.

“The opportunity came to redefine my role at Spooky and keep me as a creative force while building a relationship with Aristocrat,” he said. “It keeps me on the front edge of real-money gambling.”

That’s some payoff for the team, which worked on the game for almost two years. Spooky Cool Labs has 55 employees, which is down from 70 at the time of the launch.