Tommy Tordsson Björk and his colleague Jens Matthies have created a haunting portrait of 1960s America that has been overrun by the Nazis in an alternate history in the upcoming video game Wolfenstein II: The New Colossus. That’s pretty good for a couple of Swedish guys, as their vision is seeming a little prescient these days.

Fortunately, Tordsson Björk grew up in Sweden in the 1980s, when the country was awash in media from the United States. He almost felt like he was growing up in the U.S. himself, since he watched so much TV. That helped him craft the atmosphere of the game and the story about a new American Revolution, as the oppressed Americans led by hero B.J. Blazkowicz take their country back from the occupying Nazis.

The game comes out on October 27 on the PlayStation 4, Xbox One, and Windows. I had a chance to play an excellent level at a Bethesda preview event, and then I interviewed Tordsson Björk. 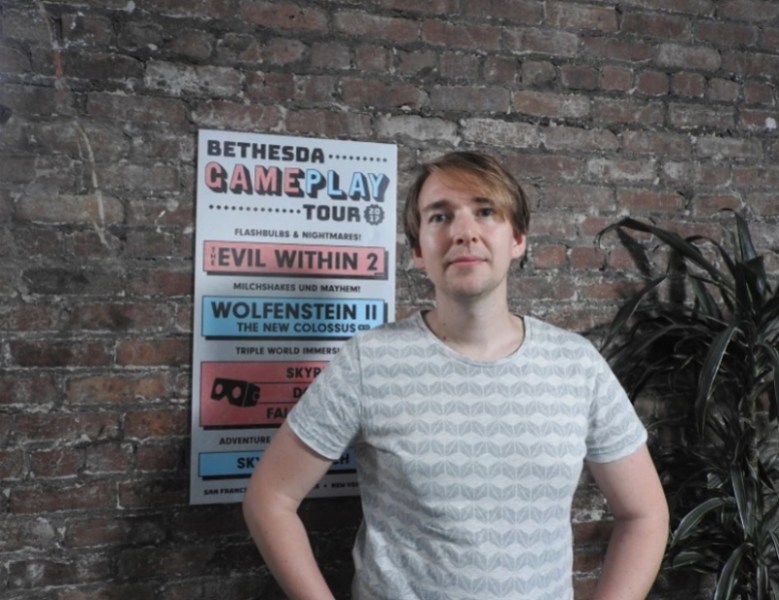 GamesBeat: I noticed that some of the cutscenes are really long. It’s unusual for an action game these days. Why did you choose to draw the cinematics out like that?

Tommy Tordsson Björk: The end goal was never just about how long the scenes should be. It’s sort of an effect of how much story we want to tell. We have all these characters and arcs we explore, the relationships between characters we want to explore. All the demands of different characters need to be met in the cutscenes. We tried to flesh that out as much as we could. Some of them can be a bit long, but the important thing is that it feels like they’re satisfying to watch. You feel the progression of the story in a satisfying way.

GamesBeat: Is that something you think the Wolfenstein audience likes from the previous game?

Björk: We established that with the new Wolfenstein games, yeah. There’s a much greater emphasis on story and character in what we’re trying to explore with this universe. I think the fans really enjoy that with these new games. 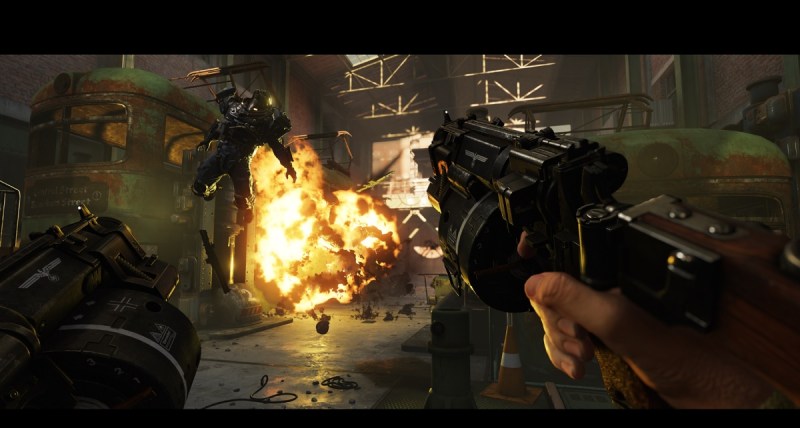 Above: Grenade launchers are quite useful in Wolfenstein II: The New Colossus.

GamesBeat: With some of the soldiers, I found that you really have to have the right weapon. The level can be a lot more difficult or a lot easier based on what you choose.

Björk: It’s definitely a balancing issue. You have to balance out how powerful weapons can be, how much ammo you have, stuff like that.

GamesBeat: If I used a little too much rapid fire with that laser too early, then I ran out, yeah.

Björk: Right, and then you can’t use it later on against the tougher opponents.

GamesBeat: At the very beginning of the demo I managed to get the Panzerhund by using a machine gun. That took the grenades, too. But just hiding in that first building and coming out shooting, making the enemies come to me, that worked.

GamesBeat: What should we notice that’s different about New Orleans versus Roswell? Roswell seemed a lot more “Nazified.”

Björk: Roswell is sort of a reflection of ordinary society under Nazi oppression. That’s where the citizens have adapted to living in Nazi-ruled America. Whereas New Orleans has been turned into this ghetto, where dissidents and “deviants” — in the eyes of the Nazis — have been grouped together and imprisoned behind this great wall that encircles the whole city.

GamesBeat: Are they still holding out in New Orleans, so to speak?

Björk: They’ve been imprisoned by the Nazis. But there are elements within this area that are continuing to work in a resistance, putting up some kind of a resistance against the Nazis in an America where resistance has mostly been stamped out.

GamesBeat: What is B.J. trying to recruit these people in New Orleans to do?

Björk: When he gets there, the Nazis have decided to just clear out the entire area, just kill everyone. He has to rescue these guys and recruit them onto his team, because he’s trying to spark a revolution in America. That’s part of that process, getting the new revolution to start.

GamesBeat: Do you do a lot of this in the game — jumping from city to city, finding new characters to join this revolution?

Björk: That’s the goal, but it doesn’t always turn out the way you would expect. It’s fair to say that you can’t necessarily rely on or trust the story. We have some twists. I think the story that we’re telling provides an emotional drive to the player, pulling them through the game in a way that’s really special.

GamesBeat: You can’t let your friends down.

Björk: Exactly. You get emotionally attached to everyone. That’s one of the things that’s been so fun to explore as we write the story and all the different characters in the resistance.

GamesBeat: There’s still a sense of humor to it, though.

Björk: Yeah, that’s always been important for us. It’s important to have some humor as a contrast to all the grim stuff, the darkness. It makes it a bit more tangible, I think, the darkness that comes through.

GamesBeat: Your team is all based in Sweden. Does it get hard at all to deal with the American and German cultural elements from there? It seems like you’d have to do a lot of extra research.

Björk: Well, for me and Jens Matthies, I think like many Swedes — in the ‘80s we grew up surrounded by American culture in media, in books and movies and TV shows. It was a big part of our childhoods. It’s not something that necessarily feels like it’s very far away from our — call it our cultural unconscious. It’s always been a part of that. But of course a big part of writing is doing a lot of research. That’s always the case, when you’re going to places where you don’t live. It’s just part of the writing process.

GamesBeat: Do you think you get a different perspective as well? You can look at American culture in ways that Americans don’t.

Björk: Yeah, maybe. It’s hard for us to judge. But that could definitely be a part of it.

GamesBeat: Little touches like the Klan’s presence alongside the Nazis — I suppose that’s not hard to predict. But still, it adds something, a little more significance in the mind of the player.

Björk: It’s an example of the aspects of American society, and an aspect of most societies — there are elements that are susceptible to these kinds of ideas. That’s one part of it. There are always going to be turncoats, or people who just grow complacent around an oppressor. That makes it much more personal for B.J. in one aspect. It’s his home country this time.